The Hawkeyes concluded the 2021 regular season with three-straight wins over the Spartans in East Lansing. 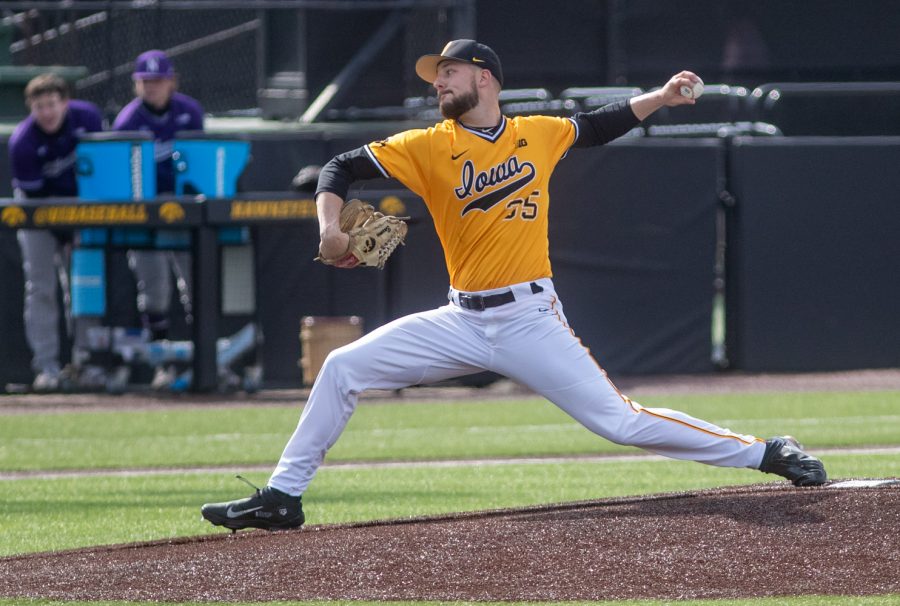 Iowa starting pitcher Cam Baumann throws a pitch during a baseball game between Iowa and Northwestern on Sunday, April 25, 2021 at Duane Banks Field. The Hawkeyes defeated the Wildcats 15-4.

This weekend, Iowa baseball wrapped up the 2021 regular season with a three-game sweep of Michigan State in East Lansing.

The Hawkeyes claimed the first and third games of the series in blowout fashion, winning 12-1 on Friday and 11-3 Sunday. Starting pitchers Trenton Wallace and Cam Baumann both provided Iowa with quality starts.

“We got a great start out of Cam on Senior Day,” Hawkeye head coach Rick Heller said in a release Sunday.  “Cam did a great job of pounding the strike zone and inducing early contact.”

Unlike Friday and Sunday, the Spartans did challenge the Hawkeyes Saturday. In the third inning of Saturday’s game, Michigan State took a 4-0 lead over Iowa.

The Hawkeyes, however, rallied back in the fifth and sixth innings, scoring five runs to take the lead. Iowa then iced a 7-4 victory with two-run ninth inning.

Sophomore Drew Irvine started Saturday’s game, giving up four earned runs and six hits in four innings. Sophomore Duncan Davitt entered the game for Irvine on Saturday and he garnered a win on the mound in 3.2 innings pitched, yielding just one hit across 61 throws.

“Duncan came in and did a good job in his three innings,” Heller said Saturday. “On offense, it was a weird game. [Spartan pitcher Jackson Bennett] was effectively wild. He gave us a lot of opportunities, but he didn’t give up a lot of contact once we got into scoring position.”

“We hit into a couple of double plays that hurt us and they kicked a couple that would have been double plays,” Heller added. “On a day when they gave us a bunch of free bases, we failed to take advantage of it, but the good thing is we kept playing and plugging and found ways to score runs.”

With the regular season now over and the Big Ten Tournament canceled because of COVID-19, the Hawkeyes have to make the NCAA Tournament to extend their 2021 campaign.

Only 64 teams make the NCAA Baseball Tournament each year — 31 of which receive automatic berths via a first-place finish in their respective conferences. As a result, only 33 at-large tournament bids are available on a yearly basis.

Iowa placed fifth in the Big Ten standings this year. So, the Hawkeyes will need to receive an at-large tournament bid to keep playing baseball in 2021.

“We’re playing great baseball and I believe we’re an NCAA Regional team,” Heller said. “I believe we’re deserving to be in regionals. Twenty-six wins in the Big Ten is a big deal, six wins against the top three teams and nine-straight Friday victories. Not many people have done that.”

“We’ve had success in regionals every time we’ve been in,” Heller added. “Our league has averaged 4.5 teams in the tournament the last five years and I don’t believe it should be any different this year.”

Iowa currently ranks 78th in the NCAA Ratings Percentage Index (RPI). The Hawkeyes are not projected to make the NCAA Tournament by both D1 Baseball and Baseball America.