After listening to both counsel’s closing statements, the jury entered deliberation on Thursday afternoon to decide if Cristhian Bahena Rivera will be found guilty or not guilty of first-degree murder. 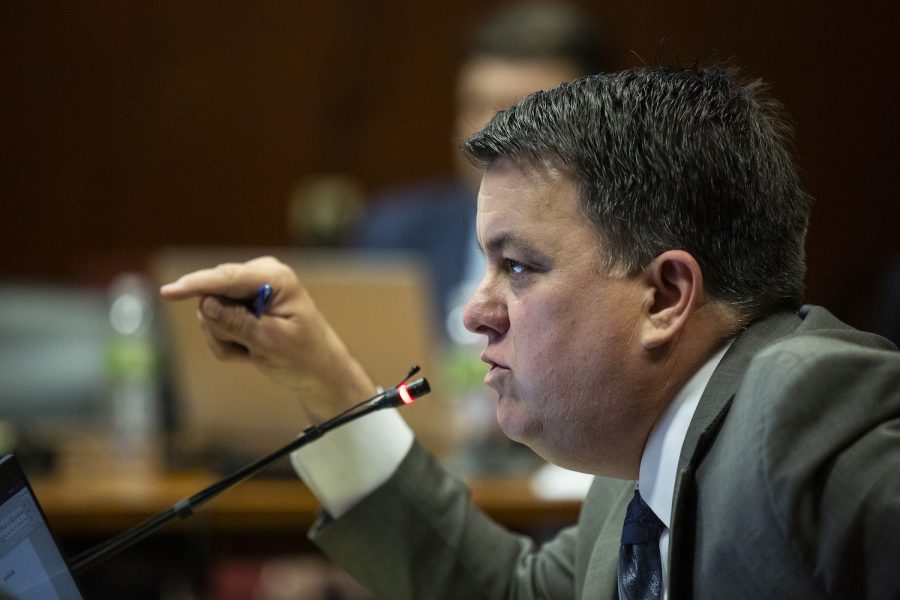 Assistant Iowa Attorney General Scott Brown cross examines Cristhian Bahena Rivera, on Wednesday, May 26, 2021, in the Scott County Courthouse, in Davenport, Iowa. Bahena Rivera is on trial after being charged with first-degree murder in the death of Mollie Tibbetts in July 2018. (Pool Photo/Kelsey Kremer/Des Moines Register)

The prosecution and defense for Cristhian Bahena Rivera offered countering closing statements on the alleged guilt of the defendant before the jury entered deliberation on Thursday.

Bahena Rivera is accused of first-degree murder in the connection with the death of University of Iowa student Mollie Tibbetts, who went missing on July 18, 2018, and her body was found on August 21, 2018, after Bahena Rivera led authorities to her body.

After a two-day jury selection, and nine days of counsel statements and witnesses testimonies, the jury entered deliberation on Thursday afternoon. It is expected the verdict will be delivered on Friday morning.

Wilson testified that Jack was in Dubuque, Iowa, on July 18, 2018. He had worked 12.5 hours that day, Wilson said, and was with the rest of the crew that night. He could not recall if Jack was playing bags and drinking, or in his room at the motel, showering and watching TV.

“You have heard the case of a woman who went for a run, and never came home,” Brown said. “Her life was brutally taken by the defendant on July 18.”

Brown called Bahena Rivera’s claim that two other men killed Tibbetts, a “figment of his imagination” and that the video evidence of his car refutes his statement.

Brown added that only Tibbetts’ killer would know that location, and the defendant’s testimony proves how important that detail is.

“He knows this is the one kind of thing that people can’t get passed whenever it comes to his guilt. That he led them to the body,” Brown said. “Wow, that’s pretty powerful. So what does he do? He comes up with another story. Denial, saw the car, takes them to the body, admits what we talked about. And then, number four, we heard yesterday. Because he is trying to explain this one away.”

Brown spent most of his statement talking about the state’s ability to prove Bahena Rivera stabbed Tibbetts, one of four elements that are needed to convict the defendant of first-degree murder.

Brown reviewed the evidence that he said proves Bahena Rivera is guilty: the video surveillance of his vehicle, his admission to former Iowa City police officer Pamela Romero, and the presence of Tibbetts’ blood in the trunk of the vehicle.

As previously reported by The Daily Iowan, a murder weapon, presumably a single-edge knife, was never found.

Brown said before the video surveillance showing Bahena Rivera’s black Chevy Malibu, authorities did not have many leads, as Tibbetts was considered a “low-risk victim.”

He began by thanking the jury for its time, and offering empathy to Tibbetts’ family on her death.

Frese said the loss of Tibbetts can invoke a lot of emotion and can be a problem for a juror.

“Emotions have no place in that deliberation room,” he said. “You don’t decide this case based upon emotions… It’s not your job to bring justice for Mollie. She deserves justice, absolutely, but that’s not your job. Your job is to do justice. Period.”

He added that the jury’s job is to analyze whether the prosecution brought forward enough evidence to prove beyond a reasonable doubt that Bahena Rivera is guilty.

“That is a high standard, folks, and you cannot forget that. You must keep that in the forefront of your mind,” Frese said. “You cannot be swayed by emotion, you cannot let pictures and emotions of pictures get to you. You must be logical and you must do your job… justice is, have they done their job?”

The level of unlimited resources at authorities’ disposal in Brooklyn, Iowa, during the search for Tibbetts was “unprecedented,” Frese said.

He said the investigation got sloppy when Bahena Rivera was targeted.

“In [Agent Vileta’s] mind, Cristhian Bahena Rivera closed the case. Good enough for them,” Frese said. “Let’s close the case, shut the book, get everyone out of here, and we’re done. But they didn’t solve the case. They didn’t get enough evidence to prove this case beyond a reasonable doubt.”

Frese emphasized that the murder weapon was never found, and two knives from Bahena Rivera were submitted and did not have any traces of blood.

He added that the prosecution did not produce any evidence of a primary crime scene, stating authorities claimed they did not look due to bad weather.

“It was humid, it was hot, it had rained,” Frese said. “They have an excuse for every piece of evidence they don’t have.”

Frese said witnesses gave the evidence that Bahena Rivera was not an angry man and was in the country for a reason, and that the idea that he had gotten angry and stabbed Tibbetts lacks common sense.

He said Bahena Rivera does not have an obligation to tell the state about the masked men or about anything else related to the incident.

“You have to be firmly convinced of his guilt, as to each and every element. All four of them, in order to convict him,” Frese said. “If not, you must find him not guilty.”

He said the defense admits that the state has proven Mollie Tibbetts was stabbed, but the state has “monumental issues” with proving the remaining three elements.

Frese said the issue with Romero’s testimony is that the jury was not able to hear the 11-hour interview with Bahena Rivera and Romero because of the language difference.

“You folks can’t judge the evidence if that interview had been with someone who was an English speaker, that evidence would have been played. No doubt about it,” Frese said. “But since it’s in Spanish, we only got to hear bits and pieces of what Ms. Romero said, and you are told to rely upon that as a confession. Folks, that is a problem.”

He said authorities were insistent that they were not from Immigration and Customs Enforcement when originally interviewing Bahena Rivera.

“They know that’s the one thing that a Mexican national, an undocumented worker fears most,” Frese said, “… And they wanted to put him at ease and hopefully he would open up.”

When Bahena Rivera did not give authorities information they wanted, Frese said at 11:30 p.m. the authorities called immigration, and wore him down.

Frese highlighted the mixture of DNA in the trunk of Bahena Rivera’s car and the lack of other DNA profiles gathered besides Tibbetts and Bahena Rivera.

He said Tibbetts’ boyfriend, Dalton Jack and other individuals’ DNA profiles should have been taken.

“The funny thing about DNA, is that it can exclude someone,” Frese said. “Would DNA exclude Dalton Jack, maybe? Maybe. But we don’t know, because we cut that corner. We wrote him off right away.”

Frese said more effort should have been put into narrowing down the details of Jack’s whereabouts due to inconsistent statements.

“[Tibbetts] was going to fly, she was outgrowing this man,” she said. “He was angry. He has a history of being a fighter. And they [authorities] knew he was a problem.”

Prior to closing statements, Yates reminded the jury that Bahena Rivera is presumed innocent, and if the state does not prove guilt beyond a reasonable doubt, the jurors must rule “not guilty.”

He also defined direct evidence and circumstantial evidence for the jury, and said only evidence offered and received by the court will be allowed for consideration when determining their ruling.

Any evidence the judge told the jury to disregard or evidence outside of the courtroom cannot be used in determining the guilt of the defendant, Yates said.

Direct evidence is evidence from a witness that claims actual knowledge of a fact. Circumstantial evidence is a chain of facts that shows a defendant is guilty or not guilty.

“There are many factors which you may consider in deciding what testimony to believe,” Yates said. “One: whether the testimony is reasonable and consistent with other evidence you believe. Two: whether a witness has made inconsistent statements. Three: the witness’s appearance, conduct, age, intelligence, memory, and knowledge of the facts. Four: the witness’s interest in the trial, their motive, candor, bias, and prejudice.”

Yates said if the state fails to prove any one of these elements, Bahena Rivera must be declared not guilty of first-degree murder. The jury will then consider elements of second-degree murder, manslaughter, and involuntary manslaughter.

The jury entered deliberation on Thursday afternoon to determine the verdict.

This is a developing story. Check back for updates.