The Daily Iowan • May 7, 2021 • https://dailyiowan.com/2021/05/07/university-clarifies-campus-chalk-policy-after-college-republicans-chalk-pentacrest/

After the UI College Republicans chalked messages on the Pentacrest and others washed it away, the university sent an email to students regarding the chalk policy, which was updated in March. 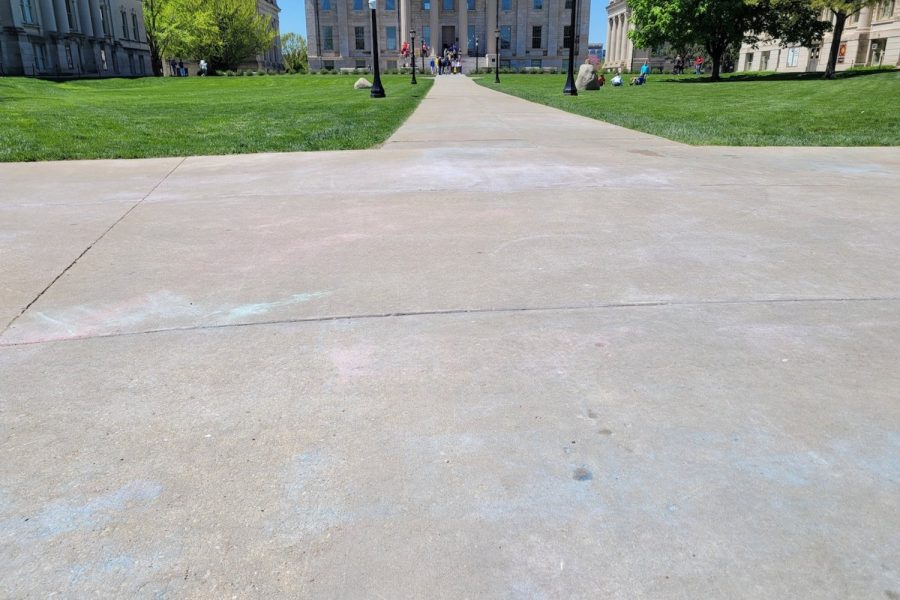 Residue of erased chalk messages left by the UI College Republicans are seen on Friday, May 7.

The University of Iowa clarified its chalking policy, which was changed in March, in a campus-wide email on Thursday after the campus Republicans chapter chalked the Pentacrest earlier this week.

The email, which came from Assistant Dean and Director of Student Accountability Angela Ibrahim-Olin, was sent after the UI College Republicans chalked the Pentacrest sidewalks, and other members of the UI community responded by washing the chalk away and writing over it.

“The university’s chalking policy has been updated to reflect our shared values of free speech, free expression, and the exchange of ideas,” the email read.

The Republican group met on Tuesday to chalk the Pentacrest with conservative messages, including “Blue Lives Matter,” “protect all life,” and “MAGA.” Micah Broekemeier, a member of College Republicans, said other students began to wash away the messages soon after.

“There was a couple of people that came by to heckle, throw some water on it,” he said. “It’s not the end of the world.”

The email noted some points of the university’s chalk policy:

Students must use only water-soluble chalk
Students must chalk only in specific areas
Overwriting, erasing, and altering chalk left by another student or organization is not allowed except by the party that did the chalking

In an email to The Daily Iowan, UI Assistant Vice President for External Relations Jeneane Beck said the chalking policy was changed in March to reflect a change in the state Board of Regents’ policy manual.

The regents’ freedom of expression policies dictate that members of the campus community are allowed to chalk in outdoor areas of campus, and that individual universities can place reasonable limits on chalking, provided they’re not related to the content of the messages.

Previously, chalking on campus was only allowed by student groups on designated areas including the T. Anne Cleary Walkway and the sidewalks around Hubbard Park.

Under the new rules, chalking is allowed on most sidewalks on campus, including the Pentacrest. Areas where chalking is not allowed include:

The change in the regents’ policy followed a series of arguments over free speech on Iowa college campuses.

Speech First, a national nonprofit, sued Iowa State University in January 2020 over policies the organization claimed “chill student speech.” Among them was a policy that prohibited chalking sidewalks except for by student organizations.

Republicans in the Legislature have also attempted to crack down on what they deem to be restrictions on student speech this year. On Wednesday, a bipartisan bill requiring universities to have statements and develop programs educating about free speech passed in the Iowa Senate.

Caleb Slater, a member of University Democrats at the UI, said he was confused about why the university sent an email regarding the situation.

“Myself and a lot of other students were very confused about the university’s decision to send out an email about this when so many other incidents have happened where the university was silent or the university had to be pushed from a lot of people to take action,” he said.

Slater also said the requirement that students can’t erase or overwrite chalk made by others is concerning. He said that should fall under the First Amendment as well.

“I see that as a form of speech and protest in itself,” he said. “I think it’s really interesting and potentially concerning that the university decided to clarify that only people who are able to draw chalk near somebody else’s chalk or erase somebody’s chalk is the person who made the chalk.”

The college Republicans group also received an email from the Office of Student Accountability on Wednesday notifying them that they were under investigation for violating COVID-19 protocols because of the event, and issuing a temporary suspension.

In the email, obtained by the DI, Ibrahim-Olin wrote that the office had received a report that the group held the event in violation of COVID-19 protocols, including social distancing and wearing face coverings.

Guidelines from the Office of Leadership, Service, and Civic Engagement, which administers student organizations, say, “All in-person events and activities must follow health and safety guidelines, including but not limited to, use of face coverings and practicing social distancing.”

In a photo posted online of the event, 22 members of the College Republicans were gathered closely together without masks.

Broekemeier said the group’s president, Makenzie Jones, spoke with administration and the temporary suspension and investigation were rescinded later that day.

Beck wrote in an email to the DI that the interim suspension was originally based on the COVID-19 Student Agreement, which says, “Students will follow social distancing guidelines by maintaining at least six feet of separation from others on campus, where possible.”

However, Beck wrote the university reversed the decision because of the recent CDC guidance.

“Based on updated guidance from the Centers for Disease Control regarding outdoor activities issued just last week, it was determined the interim suspensions should be rescinded,” she wrote.