Three Democrats, one Republican vie for vacant Board of Supervisors seat 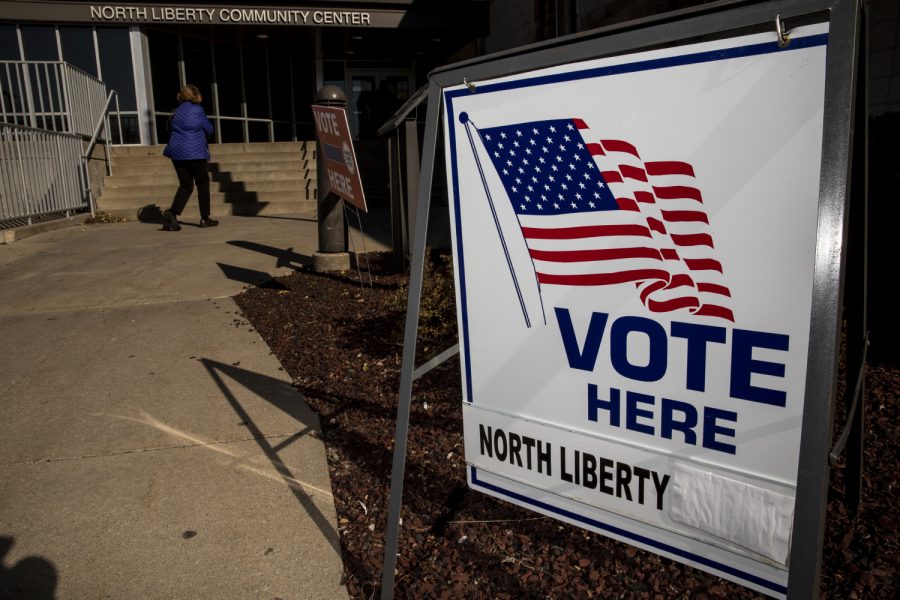 A sign marking a polling location is seen outside the North Liberty Community Center in North Liberty on Tuesday, November 3, 2020. In 2016, Johnson County was one of six Iowa counties to vote for a democratic presidential candidate, according to the New York Times.

Following Janelle Rettig’s recent resignation from the Johnson County Board of Supervisors, four candidates — three Democrats and one Republican — are seeking their party’s nomination in an upcoming special election to fill the seat.

Democrats Jon Green, Meghann Foster, and Scott Finlayson have all announced their candidacy in the special election, and Republican Micah Broekemeier has also announced his intention to run.

The special election will be held on June 8. The Democratic convention will take place on May 11 at the Johnson County Fairgrounds, where the party will officially nominate its candidate of choice at the convention. The Republican nominating convention will take place on May 8.
Jon Green
Jon Green, 38, a resident of Lone Tree, Iowa, told The Daily Iowan that he is prepared to leave behind his current IT job in order to devote himself to public service.

“It’s not about building a resume for anything else,” Green said. “When that is your end goal, that weighs on every decision you make.”

Green said he hopes to be a diverse voice while representing his constituents within the Southern region of Johnson County.

“Southern Johnson County has been historically underrepresented in the Board of Supervisors,” Green said. “I think it’s important to have a diversity of viewpoints.”

Green emphasized the importance of local governance in promoting infrastructure initiatives, including the expansion of broadband accessibility, and reducing Iowa’s reliability on declining energy sources, such as ethanol.

“We can either drag our feet, or we can be the authors of our future to build things that are more equitable and sustainable,” Green said.

Green added that there needs to be a greater focus on mental health response and resources within Johnson County, suggesting that a social worker should show up when an individual calls 911.

“None of us are immune to it [mental health struggles], and we need to take care of each other,” Green said.

On the topic of the distribution of COVID-19 relief funds, Green said he believes the funds must go directly to people who need it most rather than those that are already well-connected.

“The county needs to proactively go out and shake the bushes to find people who need these dollars,” Green said.
Meghann Foster
Coralville City Councilor Meghann Foster, who is also the Community Engagement Coordinator for the Domestic Violence Intervention Program and a member of the University of Iowa School of Journalism and Mass Communication Diversity, Equity, and Inclusion Task Force, told the DI that she is excited to potentially continue public service through the Board of Supervisors position.

“It’s an extension of my work in the community and it is an opportunity to reach and work on behalf of more people,” Foster said.

Foster emphasized the importance of social services in Johnson County.

“All it takes is one disaster to happen in a person’s life and then they’ll need to access those programs,” Foster said.

Foster said that, when state leadership is lacking, it is important for local governments to step up and take on a bigger role.

“As much as we can, we should try to make headway with Republicans in Des Moines,” Foster said. “But sometimes we need to buck the system.”

Foster said she is dedicated to helping build a public safety system that is rooted in care and protection, and she would like to see more social workers deployed in emergency situations.

“I’m committed deeply to making sure that this community is dealing with and really addressing systemic inequity and systemic racism and white supremacy,” Foster said.

Foster said, although she understands the importance of following regulations related to American Rescue Plan funds, she ultimately believes the funds should be given directly to those that need it most.

“The process may be a little bit challenging, but I absolutely agree with the intention that that money needs to be directed where it will have the most impact,” Foster said.
Scott Finlayson
Scott Finalyson, 50, Head Deputy Treasurer at the Johnson County treasurer’s office, told The Daily Iowan that he is running because he is passionate about public service and would like to make a larger positive impact on the community.

“Service is what I am all about,” Finlayson said. “I care so much about our county.”

Finlayson focused on the importance of building an accessible and inclusive Johnson County government.

Finlayson said that one of the ways he would like to increase government accessibility is by expanding the usage and presence of other languages such as Arabic, Korean, French, and Spanish in local affairs.

Finlayson also said that it is essential for Johnson County to expand the mental health resources that are available to residents.

“There’s not one family I’ve talked to that isn’t affected by mental illness,” Finlayson said.

“I think the issue is deeper than policing,” Finlayson said. “We need to work on the system so it’s rebuilt and it works for everybody, which gets back to the basics of what the government should do.”

When asked about how he would approach the distribution of American Rescue Plan funds, Finlayson said he thinks that a transparent commission of diverse voices should be created to determine how the funds should be distributed.

“The federal regulations for that money have not come out yet,” Finlayson said. “We need to write out a process with clear objectives and have an application process”

Finlayson added that because he would be willing to cooperate with the Board of Supervisors in order to determine how such funds should be distributed.

“There’s gonna be a new normal,” Finlayson said. “We are not going back to the way things were.”
Micah Broekemeier
As previously reported by the DI, 29-year-old University of Iowa student Micah Broekemeier will seek the Republican nomination for the seat.

The last time a Republican won a supervisor’s seat in Johnson County was in 2013, when John Etheredge won a special election by less than 200 votes. A Republican hasn’t won in a general election since 1958.

A former marine, Broekemeier said he wanted to bring a different viewpoint to the all-Democratic board. He said he has experience working with people from different backgrounds.

“I worked with people that were Republican or Democrat, or, you know, anything else in between,” he told the DI in a previous interview. “And I never let that get in the way and I think that’s something that military training has sort of helped me with that. I would take that same sort of mentality over to working here in Johnson County. I’ve no problem working with Democrats, I have no problem reaching a hand out across the aisle, as long as we can work for the greater good.”

Natalie Dunlap contributed to this article.

Editor’s note: This article has been updated to include comments from Scott Finlayson.