Opinion | Walking is not only cool, but economically sound

Making Iowa city more walkable makes it better for the community and the economy. 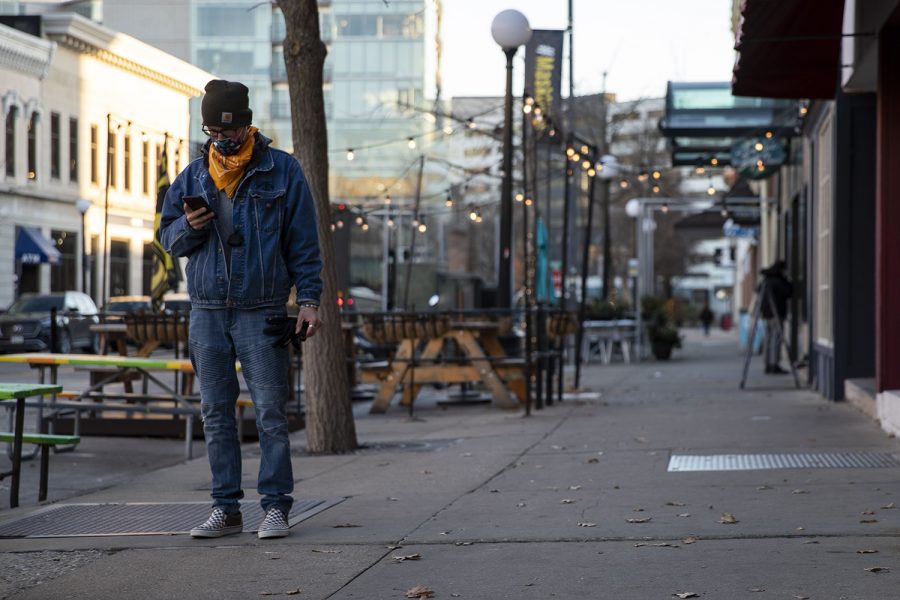 An individual waits outside before an away football game on Friday, Nov. 13, 2020 in Downtown Iowa City.

Conducting errands in Iowa City without a car is hard. The current walking score for the city is 44 out of 100. This means that if you need to run to the grocery store or want to go shopping, you most likely need a car.

If we are to ultimately realize our true economic potential and make life easier for those living downtown, Iowa City must become more accessible to pedestrians.

Imagine that you and your friends are living in a fictional town and love to watch movies in the theaters.

In this downtown, movie theaters are not allowed to be built. Therefore, you will probably have to drive out all the way to a suburb to watch a movie. Because of the driving problem, you and your friends would probably only go out a few times a month. However, if a local theater opens up close to the downtown area, you probably are going to go to the movies more often.

First, the main reason that most American cities are not walkable is because of restrictive zoning laws, which prevent urban planners from developing buildings in certain areas. For example, you cannot build retail stores next to hospital clinics in many cities.

A case study of walkability in Washington DC showed that for every 20-point increase in a neighborhood’s walking score, retail sales increased by an eye-opening 80 percent.

This contextualizes that if you replace roads exclusively for cars with roads for walkers, people tend to spend more frequently as they have much access to small businesses.

Furthermore, the same study finds that residents of more walkable neighborhoods ended up having lower transportation costs and more access to transit. Thus making it easier for thousands of people to go out and have a good time.

The costs of paving walkways are much cheaper than building roads, installing signals, and paying traffic controllers. Couple this with the fact that maintenance for walkways is minimal, and you can free millions in the public budget.

It is important to note that there is a correlative relationship between a neighborhood’s walkability and rising housing prices raising concerns about gentrification, or a steep rise in housing prices.

That being said, this relationship is not causal. Gentrification occurs because of the aforementioned zoning laws, which restricts the overall supply of housing that can be built. In reality, walkability increases housing affordability and contributes substantially to families’ needs.

Urban planners need to start catering to the wants and needs of millennials and zoomers.

As these two generations have started entering the workforce, they have begun to reject the need for cars. In short, living in cities where cars are the center of the universe holds back our urban dwellings from being so much more.

Walkability increases the liveliness of cities and their economic output. In summary, cities in which people are put first over the vehicle tend to be more economically productive, efficient, and just fun.