The Hawkeyes went from winning two regular season games to winning their first ever NCAA Tournament game in program history. 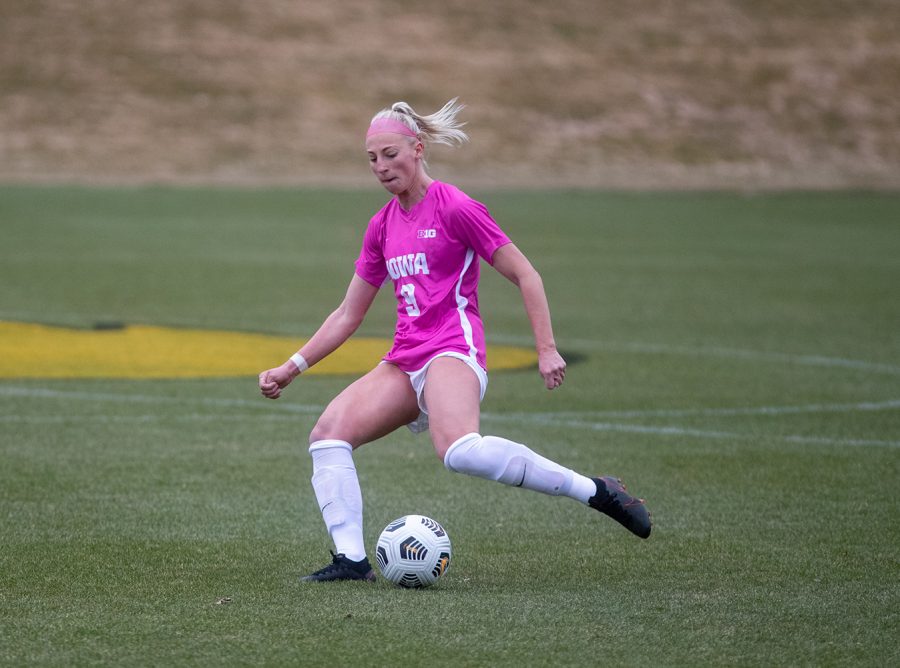 Iowa Defender Samantha Cary clears a ball during a soccer game between Iowa and Minnesota on March 14, 2021 at the Iowa Soccer Complex. The Gophers defeated the Hawkeyes 1-0.

Iowa soccer had a very eventful and historic spring 2021 season, as the Hawkeyes went from winning two games in the regular season to securing the program’s first-ever NCAA Tournament game.

This Iowa team had to wait a little longer to begin its season than in years prior. The Hawkeyes were supposed to compete in the fall 2020 season, but COVID-19 caused it to be postponed to the spring.

Unlike most years, the Hawkeyes began their spring campaign without playing non-conference games. Instead, the season was conference-only.

Iowa began its season against Wisconsin Feb. 20. The Badgers defeated the Hawkeyes, 1-0.

The Hawkeyes continued to struggle throughout the next six games, losing five of the next six matchups and playing to a scoreless draw in the other one.

A goal drought also surrounded Iowa in the first half of the regular season. The Hawkeyes failed to score a goal in their first six games.

Iowa ended the regular season with a 2-7-1 record.

The struggles would be short-lived, as everything changed for Iowa in the postseason.

RELATED: Iowa soccer loses to UCLA in second round of NCAA Tournament

“We had a lot of inexperienced players,” junior defender Sara Wheaton said. “Just a young team in general. That was something I think we were struggling with at the beginning of the season, just figuring out who we are as people, players, and as a team. We were finding our identity. In the second half of the season, things changed. We started to glue, and the chemistry came together. We understood each other’s strengths.”

Iowa began its postseason journey in the Big Ten Regional Weekend with a matchup against Illinois. The Hawkeyes defeated the Fighting Illini, 2-1. After losing in the regular season, 3-0, that victory was huge.

In a “normal” season, Iowa wouldn’t have even qualified for the postseason.

The Hawkeyes would go on to win their first-ever Big Ten Tournament in program history, defeating the likes of Minnesota, first-seeded Penn State, and Wisconsin for the Big Ten title. The run has been coined the “Revenge Tour,” as Iowa fell to each team in the regular season.

With the Big Ten Championship win, Iowa clinched a spot in the NCAA Tournament. Iowa, who had never won an NCAA Tournament game, drew Campbell in the first round.

The Hawkeyes would notch their first-ever NCAA win with a 1-0 victory over the Camels. Iowa earned its first-ever spot in the second round.

Iowa’s next opponent was No. 3 UCLA.

Iowa soccer’s magical postseason run ended April 30 by UCLA in a 2-1 loss. Iowa had a chance to continue their run, but two late goals by the Bruins proved to be too much.

Iowa head coach Dave DiIanni says it’s all about learned and getting better.

“I’m a firm believer that losses are OK as long as you know why you lost, and you learn from them,” DiIanni said. “That was a devastating loss to UCLA. Our team literally gave everything they had, and there’s nothing left. The great thing is it’s not the end of the world. Growing from that loss is what’s important.”

Although the UCLA loss was a tough one, there are countless positives in Iowa’s performances this season.

After scoring just three goals in the regular season, the Hawkeyes won five straight games and scored eight goals in the postseason.

Iowa’s defense was stellar this season too. The Hawkeyes recorded seven shutouts this season and held the opposition one score or less in 12 of their 17 games.

Freshman Goalkeeper Macy Enneking had herself an outstanding freshman year. Enneking —who became the starting goalkeeper midway through the season — proved to be one of the best goalkeepers in the Big Ten. She ended the season with 52 total saves through 10 games. After making just nine starts this season, she allowed only five goals in 956 minutes played.

She was named the Most Outstanding Defensive Player for her performance in the Big Ten Tournament and was the only unanimous Big Ten All-Freshman team selection.

Junior midfielder Hailey Rydberg and freshman forward Meike Ingles led the way in shots this season, with Rydberg recording 44 shots and Ingles taking 38 shots out of the 185 total attempts as a team.

Ingles had herself a breakout freshman campaign. After taking 20 shot attempts in the regular season without scoring a goal, the freshman scored four goals throughout the postseason — three out of the four being game-winners.

Because of her performance in the Big Ten Tournament, she was named the Most Outstanding Offensive Player.

Iowa has a lot to look forward to in the upcoming season. Iowa is losing one integral starter, senior defender Diane Senkowski. The rest of the roster will be returning. Iowa will add two graduate transfers — forwards Alyssa Walker from Richmond and Courtney Powell from Iowa State — for next season.

“I think we’re all very excited,” sophomore defender Sam Cary said. “Obviously, it’s a big loss losing Diane and what she means for our team. But when I came here, my goal was to help put Iowa soccer on the map in the Big Ten. I think we did that this season. It’s exciting that a lot of us get to come back and continue that.”