The Daily Iowan • May 5, 2021 • https://dailyiowan.com/2021/05/05/iowa-mens-tennis-looks-back-at-the-disappointing-final-season-hawkeyes-university-of-iowa/

Iowa men’s tennis looks back at the disappointing final season

After a first-round exit in the Big Ten Tournament, the Iowa men’s tennis program has come to an end. 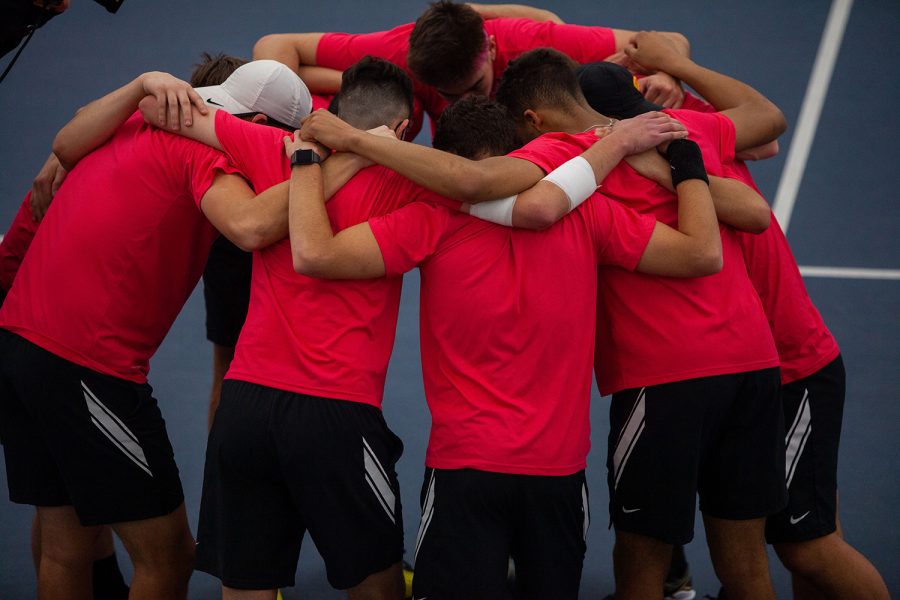 The Iowa’s mens tennis team huddles during their meet v. Nebraska at the Hawkeye Tennis and Recreation Complex on Sunday, Feb. 28. The Hawkeyes defeated the Huskers with a score of 5-2. The team wears red, instead of the team colors, to protest the University of Iowa’s decision to cut their program, making it their final season.

The spring 2021 season has officially ended for the Iowa men’s tennis team, and with it comes the end of the program.

The university announced in August that Iowa men’s tennis would be discontinued at the end of the 2020-21 academic year because of financial losses in the athletics department stemming from the pandemic.

After finishing the season with a 5-13 record and getting knocked out in the first round of the Big Ten tournament by Michigan State, the Hawkeyes didn’t make the NCAA Tournament.

“Going into [the Big Ten Tournament] we expected to win that match,” junior Will Davies said. “It was a pretty poor showing that we failed to win it, but we faced a lot of difficulties.”

Junior Joe Tyler missed the Michigan State match because of illness. As a veteran presence at the No. 4 spot in the lineup and a proven winner for the Hawkeyes, Tyler’s absence was a big blow for the team.

“I had some health issues early on in the week that I tried to get over, but I couldn’t quite seem to shake whatever was going on with me,” Tyler said. “Wednesday morning, I tried to get up and was planning to travel with the team, but I wouldn’t have been able to play.”

With a 12-2 record and a program-high No. 20 national ranking only a season ago, the team was set to have another historic campaign with all its players returning.

After winning four of their first six conference matches, it looked like those preseason predictions would end up turning true.

A loss to the Spartans on March 21 in Iowa City seemed to flip the season on its head.

“We penciled that in knowing that one match against Michigan State was the make or break for our season,” Tyler said. “The Big Ten didn’t have enough teams in it that were ranked for us to get enough wins to make NCAAs, so we were just trying to consolidate where we were at the start of the season rankings. We knew that if we lost to Michigan State, that was it we were done.”

The loss to Michigan State was the third defeat in what would end up being an eight-match skid.

It was the longest losing streak an Iowa team coached by Wilson has ever had.

“I think after losing that match the way we did it kind of just ruined the season for us,” Tyler said. “Guys became less motivated because there was nothing really to play for at that point.”

What can be forgotten in a disappointing final season like this one is what Wilson and the players he brought in managed to accomplish over his seven-year period at Iowa.

Before Wilson’s first season in 2014, the Hawkeyes had not had a winning record in conference since 1994. That streak was broken in 2019 when the Hawkeyes finished 6-5.

Wilson had a 91-83 career record at Iowa, coached four All-Big Ten players, barely missed the NCAA Tournament in 2019, and almost certainly would have led his team to the tournament in 2020 had the season not been cut short by the pandemic.

“I didn’t have one person that I talked to that told me I should take this job at Iowa,” Wilson said. “They thought it was a program that couldn’t win, that had no tradition, that was always going to finish last in the Big Ten, but that was a challenge to me.”

Even in a season with so much heartbreak, the Hawkeyes still accomplished a lot.

Senior Kareem Allaf became the program’s leader in combined singles and doubles wins and Davies now has the most doubles wins in Iowa history. Davies and sophomore Oliver Okonkwo could become All-Americans when they compete in the NCAA Doubles Tournament later this month.

“We’ll sit back and analyze in a couple of years, and we will be very proud of what we managed to achieve here,” Davies said. “We were getting better each year, and it’s bittersweet that it’s coming to an end.”