The Daily Iowan • May 5, 2021 • https://dailyiowan.com/2021/05/05/iowa-field-hockeys-ciara-smith-continues-to-thrive-in-the-postseason-hawkeyes-university-of-iowa/

Smith had another vital postseason goal against Northwestern in the NCAA Tournament quarterfinals this weekend. 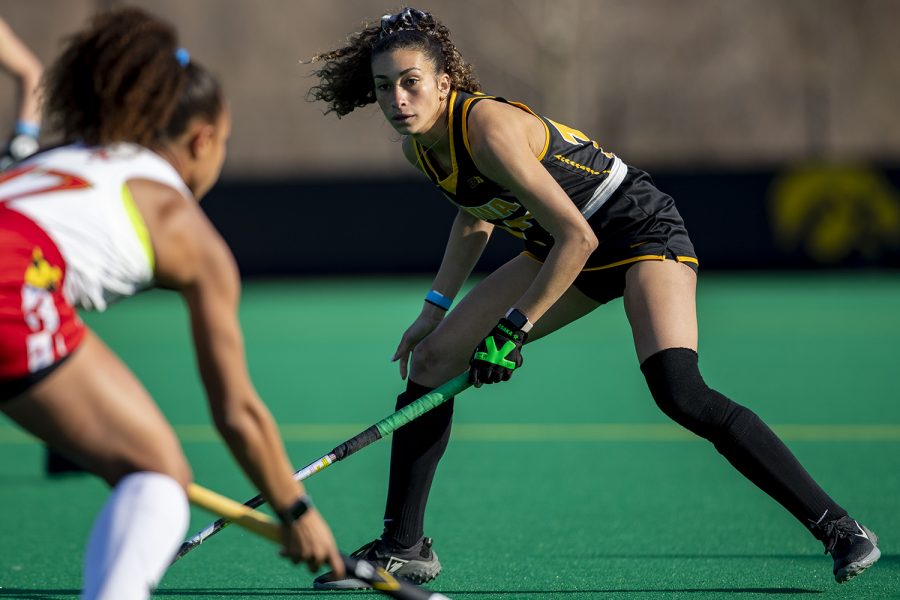 Iowa forward Ciara Smith watches for the ball during the fourth quarter of a field hockey game against Maryland on Friday, April 2, 2021 at Grant Field. The Hawkeyes were defeated by the Terrapins, 1-0. With two minutes left in the game, Iowa took their goalkeeper off the field in favor of adding another player on offense.

Some players do not like the pressure of big games and the postseason, but Iowa field hockey forward Ciara Smith is quite the opposite.

The junior from Virginia impressed in Sunday’s NCAA Elite Eight game against No. 5 Northwestern and scored the opener for Iowa on its way to a 3-1 win.

Her goal against Northwestern came early in just the sixth minute of play and set the tone for the rest of the game. Sophomore midfielder Sofie Stribos served up a strong cross into the middle of the arc and Smith managed to get her stick to the ball before the nearest defender could get a block in.

The ball slid under the goalkeeper, and Iowa never looked back.

“She had a fantastic warmup,” Iowa head coach Lisa Cellucci said. “So we wanted to get her in the game early. It was great for her to put in that first goal, and I was so proud of her performance today.”

This is not the first time Smith has come up clutch in the postseason. In the Round of 16 of the NCAA Tournament last season against Duke, she had the game of her life.

Smith opened the game strong by giving a smart assist to Leah Zellner with just over five minutes gone in the match. After the assist, she became the goalscorer. An assist from senior forward Maddy Murphy set up Smith to bury a shot and carve out a 2-0 lead. She was not done yet.

After an Iowa shot was blocked, Smith was there to follow up and put the ball away to create a 3-0 that was too big of a deficit for the Blue Devils to overcome. The Hawkeyes ran out 3-2 winners, and Smith finished with a career-best five points in one game.

Smith loves the challenge of competitive games, especially when the postseason rolls around.

“I’ve always felt like I thrive in tournament season, and I find the pressure to be motivating and push me even further,” Smith said. “Having the Duke game last year gave me some confidence going into the game.”

Although Smith is not a starter, she is the first off the bench and gets plenty of minutes. Thanks to her athleticism, she creates energy up front, and is important in pressing and winning balls back in dangerous areas.

Since getting on campus, Smith has grown tremendously as an athlete. After getting game time in seven matches her freshman year, Smith started four times during her sophomore campaign and played in 21 matches.

Smith has taken her fitness levels to the next level after the COVID-19 offseason. With that, Smith feels she is now more able to focus on her skill without having to worry about being fatigued. Her improved skill has also helped her individual defense. Although Smith is an attacking player, she has an important role of being the first line of the press.

“As an attacker, my individual defense when it comes down to pressing [is important],” Smith said. “I want to be able to find moments to break up the play and counterattack with speed.”

Smith will have another chance to shine against No. 1 North Carolina in the Final Four Friday at noon in Chapel Hill, North Carolina.