Per a University of Kentucky release, Fredrick filled out the paperwork required to officially become a Wildcat earlier this week. 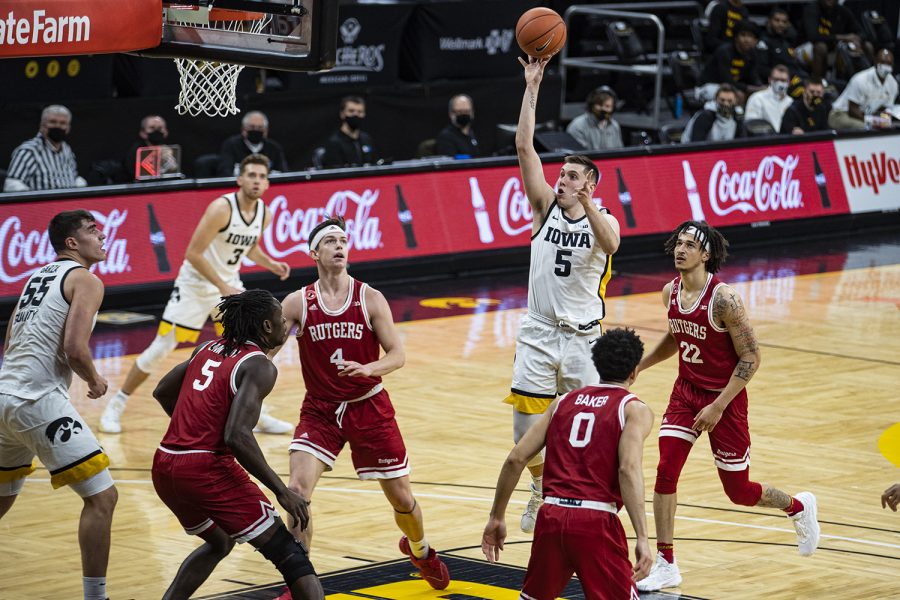 Iowa guard CJ Fredrick takes a shot during a menÕs basketball game between Iowa and Rutgers at Carver-Hawkeye on Wednesday.

Fredrick announced that he’d entered the transfer portal on April 19.

“After talking with coach [Fran] McCaffery and with the statement released this morning from the University of Iowa, I have entered my name into the transfer portal,” Fredrick tweeted April 19. “I have come to the difficult decision to participate in the process. Thank you coach McCaffery and the entire basketball staff, all of my teammates, and to Hawkeye Nation for giving me a chance. I gave you my best and appreciate you letting me be a part of Hawkeye Nation.”

Per the University of Kentucky, Fredrick signed with the Wildcats earlier this week.

On April 15, the NCAA Division I Council approved a new measure that will allow all student-athletes the one-time ability to transfer without penalty. So, Fredrick will be eligible to play for the Wildcats as soon as next season.

“I am very excited for this new opportunity in my basketball career,” Fredrick said in a release. “I really appreciate the confidence [Kentucky head coach John Calipari] has in me. I am looking forward to going to work and developing as a player with Coach Cal, the staff, and my future teammates. Thank you to coach McCaffery, the staff, my teammates, and Iowa fans for three memorable years. I cannot wait to get back on the floor at Rupp Arena to help this team win and make Big Blue Nation proud.”

In 52 appearances in the Black and Gold, Fredrick averaged 8.8 points per contest and made 46.4 percent of his attempts from 3-point range.

“CJ Fredrick is an established college player from a terrific program who has competed at the highest level and has made big shots and big plays,” Calipari said in a release. “As we all know, CJ is a terrific shooter, but what stuck out to make on tape is he takes care of the ball. He has an excellent assist-to-turnover ratio, and he can hold his own defensively. He guarded the best guard on the other team in just about everything I have seen.

“What I love about CJ is his approach in all of this,” Calipari added. “In every conversation I have had with him, he has a great plan of how he wants to improve and where he needs to take his game to get better. He wants to be challenged. He wants to be coached, and he embraces competition.”

In 2018, Fredrick was named Kentucky Gatorade Player of the Year, leading the Colonels to a state championship. That season, the Colonels went 35-4, and Fredrick averaged 23.1 points per game.

Some Hawkeye fans speculated that Fredrick would transfer to Kentucky as soon as he entered the transfer portal because his uncle, Joe Fredrick, posted “Help coming” in response to a Kentucky fan’s Facebook comment in March.

In Iowa’s defense his uncle put this on Facebook in March. It surely seems there was some tampering involved. I really don’t care but lets not side with Joe Fredrick. Guys seems like a goon! pic.twitter.com/7nBotRK2oq

CJ’s uncle wasn’t too pleased with that tweet lol pic.twitter.com/HYbFMXTRke

While he was an assistant coach at Notre Dame, McCaffery coached Joe Fredrick.

Some even speculated that a tweet from Iowa Athletic Compliance was directed toward CJ Fredrick.

Now the Iowa Compliance twitter is alluding to accusing Calipari of contacting CJ Fredrick before he entered the portal.

Lot of accusations going around with absolutely zero proof.#BBN https://t.co/rkc1Kha8Ja

Center Luka Garza left Iowa for the NBA. Garza will have his chance to be selected in the 2021 NBA Draft on July 29.

Guard Joe Wieskamp’s name is also currently in the 2021 NBA Draft pool, though he did not sign with an agent, meaning he can withdraw his name from the draft, maintain his collegiate eligibility, and return to Iowa for the 2021-22 season if he so chooses.

Many thought Jordan Bohannon would not return to Iowa for the 2021-22 season, but on April 26, the Marion, Iowa, native announced that he would don the Black and Gold for a sixth year in 2021-22.

Bohannon noted that Fredrick’s decision to transfer away from Iowa helped him choose to return for one last season at the UI.

“CJ’s decision definitely played somewhat a part,” Bohannon said. “My ability to move off the ball, and not have to worry about if I came back, that I’d impact Joe Toussaint’s trajectory as a player in college … So, CJ’s decision to decide to transfer reopened that gate.”

Currently, Kentucky is scheduled to open its 2021-22 season against Duke November 9 at Madison Square Garden. In that game, Fredrick — a former All-Big Ten honorable mention and All-Big Ten Freshman team selection — could make his Wildcat debut.