The Daily Iowan • May 4, 2021 • https://dailyiowan.com/2021/05/04/iowa-city-to-walk-in-solidarity-with-meskwaki-nation-to-raise-awareness-for-missing-and-murdered-indigenous-women/

The walk will take place at noon today at Riverfront Crossings Park, and aims to bring attention to the national violence disparities against Native women. 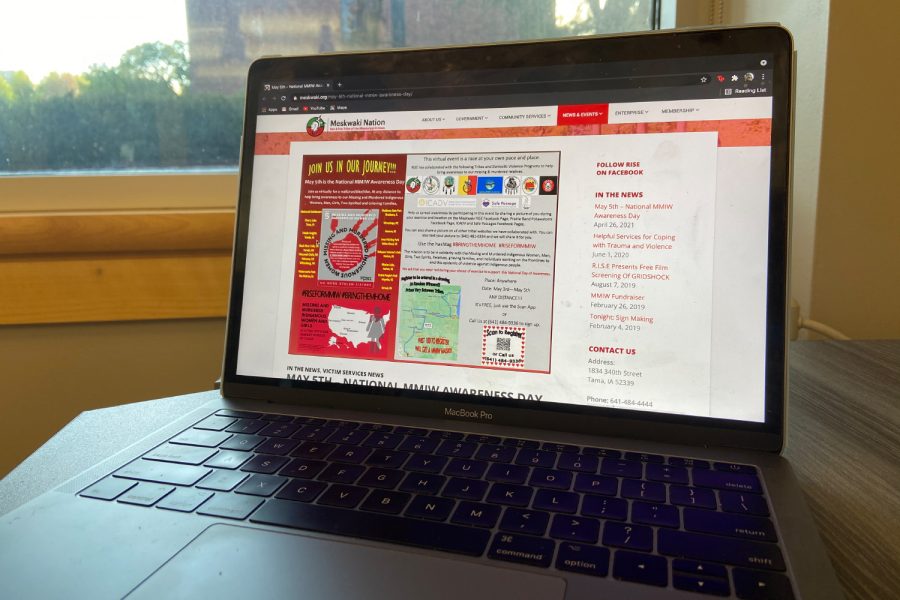 RISE (Resources for Indigenous Survivors and Empowerment) will join the Meskwaki Nation and other Midwestern tribes on Wednesday to stand in solidarity and raise awareness for the missing and murdered Indigenous women, men, girls, and grieving families of their communities. The event is part of Missing and Murdered Indigenous Women Awareness Day.

Iowa City will host its own walk in conjunction with the virtual event to help amplify the message. The walk will take place from noon to 2 p.m. at Riverfront Crossings Park, behind Big Grove Brewery.

Faith Wilson, organizer of the walk, recommended that people sign up for RISE’s walk by contacting the organization directly or scanning the code on the event flyer.

The Meskwaki Nation asked that participants dress in red, as it is a sacred color to many tribes and the color they’ve traditionally worn to raise awareness for missing women and girls.

RELATED: Acknowledging the homelands of tribal nations where the University of Iowa resides

There exists an epidemic of violence against Indigenous women that is well known to people within Indigenous communities but historically underreported in the media. Indigenous women and girls are 10 times more likely to be murdered than the national average, as reported by the Justice Department.

One of these missing women is Rita Papakee, member of the Meskwaki Nation, who disappeared on Jan. 15, 2015. There have been no traces of her in the past six years, Oliviah Walker, Papakee’s cousin, told The Daily Iowan. Though the Meskwaki Nation Police Department have received updated information and identified potential suspects within the past year, Walker said they have not been able to release any new information since then to her family.

“We’re just hoping that one day we can get closure on this case,” Walker said. “I don’t know that we’ll ever get justice, but hopefully closure. Rita was a mother of four, she has two grandchildren that she’s never met.”

Papakee was 41 when she went missing.

Walker further explained the disparities in violence that exist for women of color — specifically Indigenous women. She attributed the lack of awareness and lack of response from police departments to insufficient communication between federal, state, local, and tribal law enforcements.

“Once an Indigenous woman or girl goes missing or dies under suspicious circumstances, the investigation, prosecution, and sentencing processes that are supposed to serve justice often fail to provide equal and fair treatment for these Indigenous victims,” the report stated. “Finally, the system does not offer adequate culturally responsive healing resources for Indigenous victims/survivors, families, and communities.”

Functioning as the informal spokesperson for her family, Walker advocates for resources within police departments to be channeled to more beneficial routes and works to push for prevention in her community. In addition to Wednesday’s walk, Walker ran a 5k on Tuesday.

“When you look at the murder average nationally, there’s definitely disparities that exist for Native women, and because there’s also jurisdictional loopholes, it’s really difficult,” Walker said. “There’s probably a small fraction of cases where families have ever seen justice, with either missing cases, with homicide cases, and other cases.”