The Daily Iowan • May 4, 2021 • https://dailyiowan.com/2021/05/04/incoming-university-of-iowa-president-barbara-wilson-receives-80-percent-approval-from-campus-survey-prior-to-selection/

The University of Iowa’s Presidential Search and the state Board of Regents released survey results for approval of the four presidential candidates last week. Incoming UI President Barbara Wilson received the highest approval ratings among the candidates. 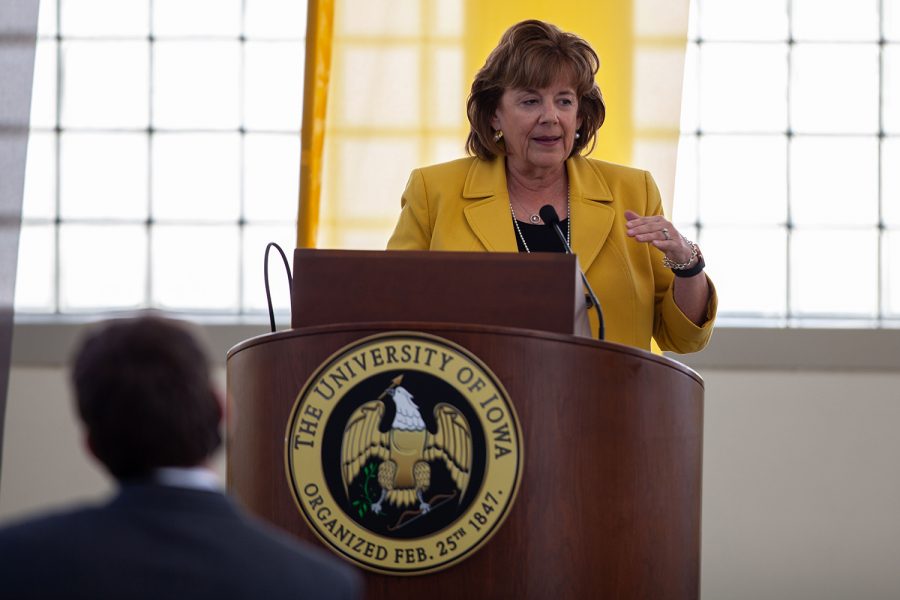 Incoming University of Iowa president Barbara Wilson was a popular choice on campus.

After watching four forums for the new president, the UI community filled out surveys regarding the candidates.

On April 28, the UI’s Presidential Search Committee released a summary of the surveys. Incoming UI President Barbara Wilson received the highest level of support of any candidate, with 80 percent of respondents saying they would support her selection.

Eight percent of respondents strongly disagreed with her potential selection in the survey results.

Of the 321 answers to Wilson’s survey, 126 respondents were faculty members, 116 were staff members, and 28 were students. Surveys were also distributed to alumni, senior administrators, and other Hawkeye community members.

The majority of respondents evaluated finalists Hari Osofsky, Barbara Wilson, Wendy Hensel, and Daniel Clay from their Curriculum Vitaes and the forums that were held for each candidate.

When current UI President Bruce Harreld was selected, 1.8 percent of faculty and 2.6 percent of other respondents found Harreld to be qualified for the position. The other three candidates in 2015 – Joseph Steinmetz, Michael Bernstein, and Marvin Krislov – all each individually received confidence votes of more than 90 percent of the faculty-survey respondents.

The report highlighted 16 positive themes from feedback about Wilson, including her long-term commitment to servant leadership at her current institution, being well positioned to handle university challenges and opportunities, and her experience at a complex academic institution.

As for negative themes, respondents said she was a more traditional academic leader, but there were “limited weaknesses identified.”

In the additional comments section of the feedback results said Wilson was “supported broadly by campus.” Wilson received “excellent” ratings in every weighed category, including questions about experience with academic medical centers and appreciation for athletics.

Hensel was praised for her innovative ideas and steady presence. Respondents said she seemed approachable and demonstrated experience in closing achievement gaps among student groups.

Hensel’s weaknesses according to the results were her limited experience in health care and athletics administration and occasional perceptions of a more distant communication style.

The positive themes respondents mentioned for Osofsky was her J.D. and doctorate combination, as well as her Big Ten experience. Those surveyed called her collaborative, approachable, and authentic.

Osofsky’s limited senior management, health care, and athletics administration experience proved to be negative themes in the responses. The UI community commented on her limited administrative experience in undergraduate education and short tenure at multiple institutions.

All three women candidates were praised for their strengths in diversity, equity, and inclusion.

Daniel Clay received the least amount of campus support, sitting at an approval rating of 35 percent. Clay also received the most negative themes according to the survey results and saw the highest level of respondents disagreeing with his potential selection, at 40 percent.