The Daily Iowan • May 3, 2021 • https://dailyiowan.com/2021/05/03/iowa-mens-golf-finishes-second-at-big-ten-championships-crowns-mcclear-as-individual-medalist/

The Hawkeyes came up one shot short of Illinois on Sunday, but sophomore Mac McClear claimed individual medalist honors in the Big Ten Championships. 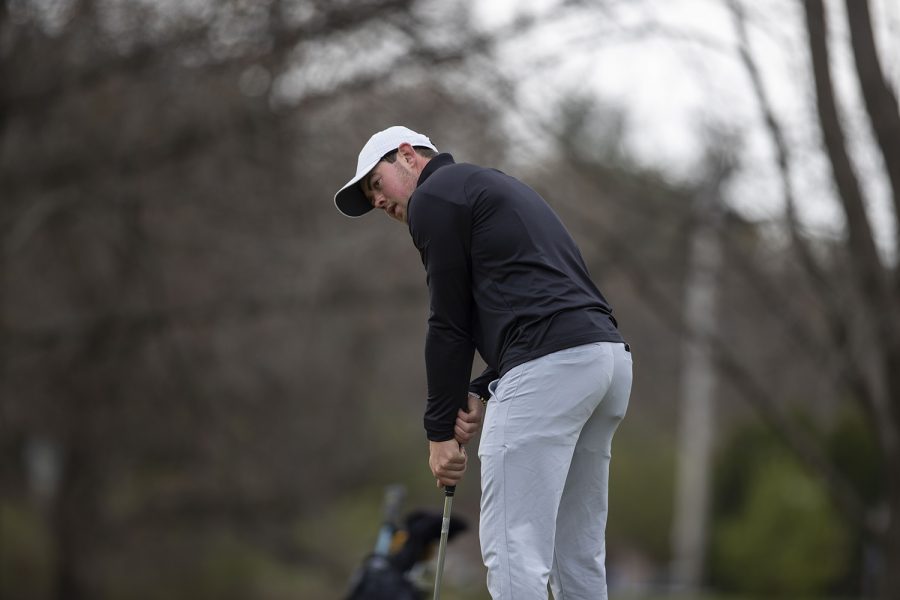 Katie Goodale for The Daily Iowa

Iowa’s Mac McClear looks to the hole during the third round of the Hawkeye Invitational at Finkbine Golf Course on Sunday, April 18, 2021. Iowa won the invitational 24 under par. McClear finished second overall 10 under par.

Before the start of Sunday’s third and final round of the Big Ten Men’s Golf Championships, Iowa senior men’s golfer Alex Schaake posted a picture of the practice green at Crooked Stick Golf Club to his Instagram story, accompanied by the words, “What a day to have a day.”

The Hawkeyes started Sunday’s 18-hole round in second place in the team leaderboard, two shots behind then-five-time defending conference champions No. 11 Illinois.

But the Hawkeyes couldn’t keep their lead, as the Fighting Illini made a five-under-par run on the final nine.

While the counting Hawkeye players finished the final stretch with a score of one-under-par, the Fighting Illini scorers tallied eight birdies and an eagle over that span.

On the final hole of the tournament, both McClear and Schaake had opportunities to tie Illinois, but their putts didn’t fall, giving the Fighting Illini their sixth consecutive conference championship.

The Hawkeyes finished the tournament with a 20-over-par 884, one shot behind Illinois’ 883.

“I mean, bittersweet ending obviously coming up a shot short on the final hole,” head men’s coach Tyler Stith said. “But you can’t take anything away from our effort. The guys were so solid this week, and gave it absolutely everything, all the way until last hole. We went shot-for-shot with the reigning champions and proved to ourselves that we’re capable of winning the Big Ten Championship, we know we can play with anybody over 54 holes.”

Although Iowa came up short in the team competition, the Hawkeyes didn’t come back to Iowa City empty handed.

For the third time in this spring’s six events, Schaake and McClear finished in the top two spots on the individual leaderboard.

McClear carded rounds of 74, 70, and 71 throughout the 54-hole tournament to post a winning total of one-under-par 215 on the par-72 layout. The Hinsdale, Illinois, native was the only golfer to post a score under par.

Schaake carded a two-over-par 218 — good for a second-place finish.

McClear’s Saturday round featured 16 pars and two birdies — the second-best round of the day across the entire tournament field.

Stith said he believes there are only a handful of PGA Tour players that could’ve gone bogey-free under the conditions Crooked Stick provided on Saturday.

“You just have to have everything going well, and you need a little bit of luck too,” Stith said of McClear’s second round. “I mean, it’s a major championship venue under hard conditions with wind and the course setup was extremely challenging. Everything’s got to be clicking. But I think the biggest thing is you just have to be mentally strong. You’ve got to be focused on every shot, staying disciplined. Sometimes you just have to, you have to, step up and just execute a shot knowing that there’s trouble left, trouble right, whatever. You just have to be able to step up under pressure and execute shot after shot for five hours for 18 holes. [That round] just showed his game, his character, and just the amazing player that he’s becoming.”

Through the windy circumstances, McClear said he was in the zone all day Saturday.

“That was one of the better rounds that I’ve ever played,” McClear said. “Not very often you get to have a bogey-free round, let alone when it’s really tough conditions out there. I don’t really know what happened. I don’t really remember a lot of the round I was so mentally, kind of in the zone, that I was just kind of blocking everything out just focusing on one shot at a time.”

On Sunday, McClear started the day tied for the lead with Illinois’ Adrien Dumont de Chassart, but pulled away for a three-shot victory over 18 holes. McClear was bogey-free again on the final nine holes of the course, making two birdies over that span.

Dumont de Chassart finished in a three-way tie for second with Schaake and Purdue’s Joe Weiler.

McClear was at ease near the top of the leaderboard near the end of the tournament. He said his previous top-place finishes in the regular season, his victory at the Spartan Collegiate on March 8-9 and runner-up finish at the Hawkeye Invitational on April 17-18, helped him close out the tournament on Sunday.

“Anytime you win in the past you can draw those experiences,” McClear said. “You feel more comfortable the more times you can do something. Even though the field was all Big Ten teams, it’s basically the same strength the field as all the tournament’s we play. It just feels like a bigger stage. Having those past experiences definitely helped me feel more comfortable.”

McClear is the fourth Hawkeye medalist at the Big Ten Championships in Iowa program history and the first since Alex Schaake’s brother Carson Schaake tied for first in 2015.

The Hawkeyes will now wait for an NCAA tournament bid. The selection show for the NCAA regional golf tournaments will be aired Wednesday at 1 p.m. on the Golf Channel.