The men’s team lost its first round matchup to Michigan State, and the women’s team was knocked out in the semifinals by Ohio State. 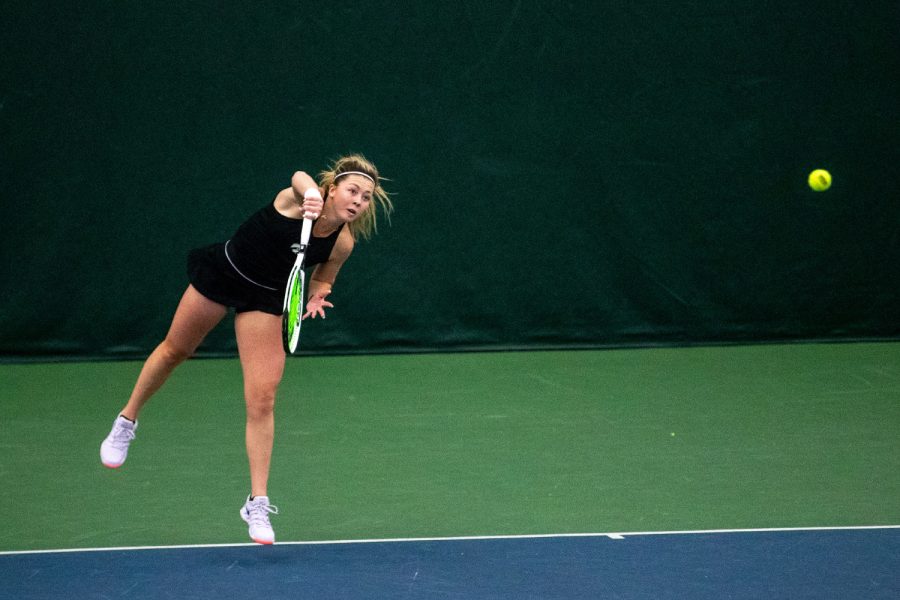 Iowa’s Alexa Noel returns the ball during a women's tennis meet at the Hawkeye Tennis and Recreation Complex on Thursday, Feb. 26, 2021. The Hawkeyes defeated the Hoosiers with a score of 4-3.

Iowa men’s tennis was defeated 4-2 by Michigan State in the first round of the Big Ten Tournament Thursday in Lincoln, Nebraska.

The loss to the Spartans is the final match that an Iowa men’s tennis team will ever play, as the team is slated for discontinuation after the spring 2021 season because of financial losses in the athletics department from COVID-19.

The first-round exit puts a cap on what has been a disappointing season for the men’s tennis team. The Hawkeyes went 5-13 on the year and ended the season losing nine of their final 10 matches.

Iowa head men’s tennis coach Ross Wilson’s decision to put the two freshmen of Rudra Dixit and Peter Alam together for doubles paid off, as they defeated the No. 66 ranked doubles pair of Kazuki Matsuno and Nick Williams and grabbed the doubles point for Iowa.

From there it looked like Iowa was in full control, as the Hawkeyes were 4-2 in matches where they had won the doubles point going into competition on Thursday.

The lower half of the lineup has been Iowa’s kryptonite all season, and they once again failed to put points on the board as Peter Alam and Nikita Snezhko were the first two Hawkeyes to lose in singles.

With the losses, Snezhko and Alam finished the season without a win in singles.

Michigan State’s Nick Williams beat first-team All-Big Ten senior Kareem Allaf for his first victory of the season at the No. 1 spot.

Okonkwo managed to keep the Hawkeyes alive with a win on court two, but his fellow Englishman Will Davies gave up a one-set lead to lose, 3-6, 6-1, 6-3, which sealed the victory for Michigan State.

On the women’s side, the Hawkeyes got the job done Friday in the quarterfinals of the Big Ten Tournament, with a shutout win over Maryland in Madison, Wisconsin.

“[Maryland] has been playing well, definitely a hot team,” Iowa head women’s tennis coach Sasha Schmid said in a release. “We had to dig in in those singles matches, and I was proud of how hard we fought on all courts.”

The Hawkeyes won the doubles point and proceeded to pick up points from No. 114 Elise van Heuvelen Treadwell and juniors Samantha Mannix and Michelle Bacalla.

The semifinal matchup for Iowa versus No. 13 Ohio State came down to the wire before the Buckeyes edged the Hawkeyes, 4-2.

After getting blown out in doubles on courts two and three, the Hawkeyes needed to come back and beat the tournament’s top seed on four singles courts.

The Hawkeyes received their first point on court one from No. 18 Alexa Noel. The freshman remained undefeated and grabbed her 23rd win after dominating No. 15 Irina Cantos Siemers, 6-1, 6-2.

Noel’s doubles partner, Samantha Mannix, followed up with a straight-set victory of her own.

After winning the first set, van Heuvelen Treadwell was in a tight three-set battle with the match on the line.

The Seaford, East Sussex, England, native has been a reliable finisher for the Hawkeyes all season, with six wins in seven three-set matches going into Saturday.

After taking a two-game lead in the third set, though, van Heuvelen Treadwell had an uncharacteristic loss of momentum and lost, 1-6, 6-3, 6-4.

“This was a huge heartbreaker,” Schmid said. “I think the team put themselves in a position to get four points today and unfortunately we didn’t get to the finish line in a couple of spots.”

The women find out if they made the NCAA Tournament Monday night.