After being swept by Northwestern during the regular season, the Hawkeyes came to play in the quarterfinals of the NCAA Tournament. 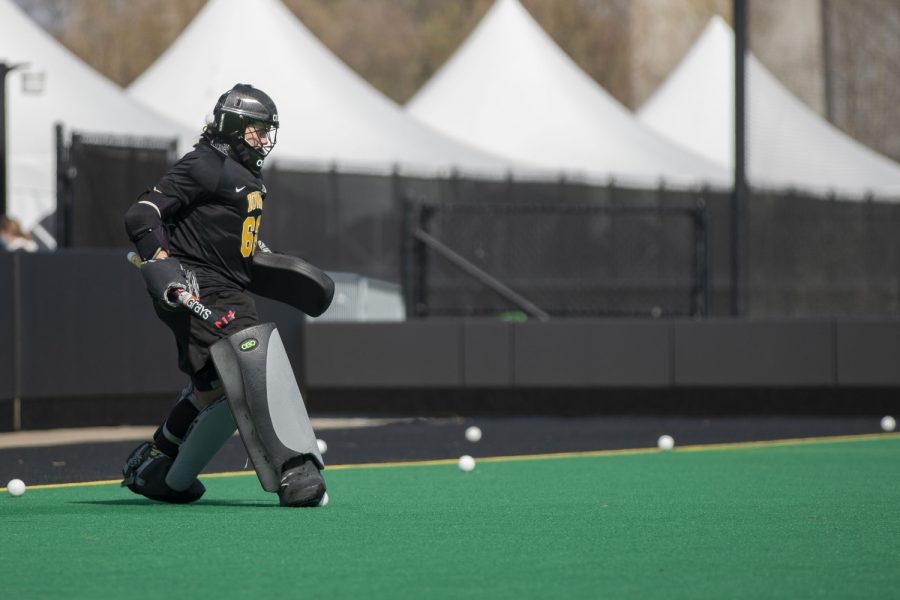 Iowa goalkeeper Grace McGuire practices before the Big Ten field hockey tournament semifinals against No. 1 Michigan on Thursday, April 22, 2021 at Grant Field. The Hawkeyes were defeated by the Wolverines, 0-2. Michigan will go on to play against No. 7 Ohio State in the championships on Saturday.

Winning is something Iowa field hockey has been accustomed to throughout this season, but Northwestern was one team Iowa could not get the upper hand on during the regular season.

That all changed in North Carolina Sunday, as the Hawkeyes ousted the Wildcats out of the NCAA Tournament with a 3-1 win.

Making it to their first Final Four since 2008 and 12th in program history was exciting for the team but getting revenge over Northwestern was even sweeter.

“It’s hard to beat a team three times, and I think Northwestern had that pressure on them,” Iowa head coach Lisa Cellucci said. “We finally put a full game plan together against them.”

It was a more open game than usual for Iowa, with there being 31 shots between the two sides. Both teams created quality chances throughout and Northwestern looked likely to score several times, but junior goalkeeper Grace McGuire came up with many big saves. Her save in the middle of the fourth quarter to deny Northwestern’s Ana Garcia was huge in preserving the Iowa lead late.

McGuire’s eight saves were a career high and huge in getting Iowa over the hump and into the next round.

“She’s a gamer, and in some of the biggest games she’s showed up,” Cellucci said. “She made a couple of multi-save situations early in the first half, and that set the tone for her.”

Although Iowa gave up more chances than usual, the offense created plenty. Iowa had 18 shots on the day and directed seven of those on target.

The Hawkeyes got off to a quick start thanks to a slick finish from Ciara Smith inside seven minutes. Smith’s goal was her first of the season and a huge confidence boost for the team.

The Hawkeyes came out strong in the second half and were quickly rewarded for their strong start. Murphy and senior midfielder Ellie Holley combined to assist Lokke Stribos off a penalty corner and extend the lead to two goals.

After missing Iowa’s last game due to a non-COVID-19 related illness, Murphy’s presence in the lineup was a welcome addition.

“She’s important in all facets,” Cellucci said. “It’s hard for us to play without Maddy Murphy, so we were glad she was back.”

Iowa held firm in the second half. Even after Northwestern pulled out its goalkeeper late in the fourth quarter, Iowa held firmly onto the 3-1 lead to advance to its first Final Four since 2008.

Iowa will play No. 1 North Carolina in the Final Four Friday. The two sides last met in last year’s NCAA Tournament in the quarterfinals. North Carolina got the 1-0 victory over the Hawkeyes in that match.