Three Iowa football players have now been selected in this year's draft. 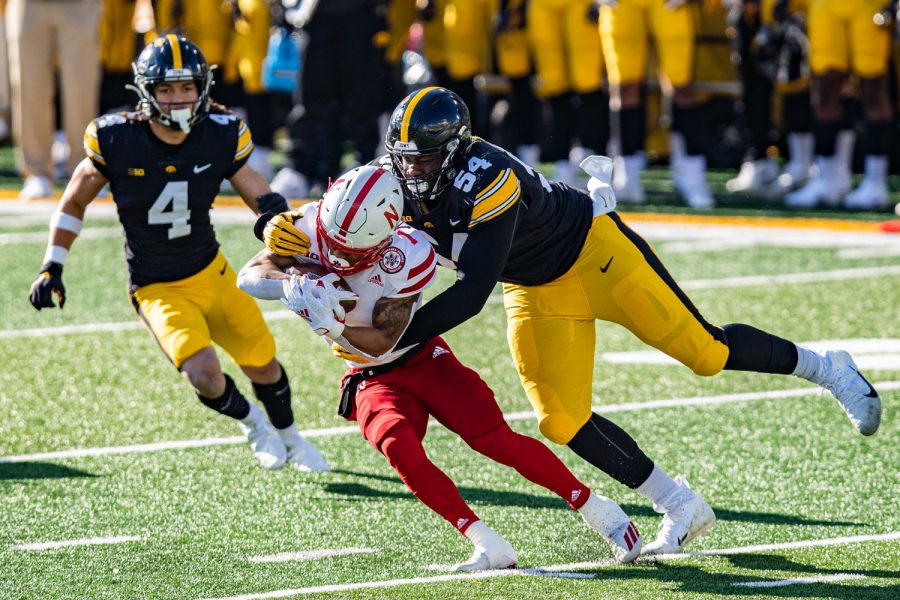 The wait is over for Ihmir Smith-Marsette and Daviyon Nixon.

Nixon (defensive tackle) and Smith-Marsette (wide receiver and kickoff returner), both former Hawkeye football players, were selected with back-to-back picks in the fifth round of the 2021 NFL Draft Saturday afternoon. The Minnesota Vikings made Smith-Marsette the 157th overall pick in this year’s draft. The Carolina Panthers selected Nixon one pick later at No. 158 overall.

Smith-Marsette (6-foot-1, 181 pounds) is the first Iowa wide receiver drafted in nine years and only the program’s second since 2002. The speedy New Jersey native ran a 4.43-second 40-yard dash at his pro day and put that speed on display during his Hawkeye career.

A frequent pass-catcher for Iowa the past four seasons, Smith-Marsette finished his Iowa career with 110 receptions for 1,615 yards and 14 touchdowns. He also ran for four touchdowns and averaged 28.8 yards per return as Iowa’s kick returner, scoring on special teams in back-to-back games to close the 2019 season.

Smith-Marsette was the offensive MVP of the 2019 Holiday Bowl, a game in which he scored a touchdown via a rush, reception, and kickoff return.

Nixon only started one season for Iowa, but made it count.

The 6-foot-3, 313-pounder earned consensus All-American honors as a junior in 2020. Nixon elected to forgo his senior season and enter the draft.

Nixon was disruptive on seemingly every snap in 2020, but his signature play came against Penn State, when he picked off Nittany Lion quarterback Sean Clifford and ran 71 yards for a touchdown. On the way, Nixon pulled out a euro step to evade Clifford. The play was an impressive athletic feat for a player the size of Nixon.

The Kenosha, Wisconsin, native played one season at Iowa Western before joining the Hawkeye program in 2018. Nixon redshirted in 2018 and only started one game in 2019 before becoming one of the best players in the country in 2020.

Three Hawkeyes have now been selected in this year’s draft. Defensive lineman Chauncey Golston was selected in the third round Friday by the Dallas Cowboys.

Back-to-back Hawkeyes go off the board in the #NFLDraft❗️@HawkeyeFootball star @DaviyonNixon is about to #KeepPounding with the @Panthers: pic.twitter.com/Opyqbjo9aH

What are the @Vikings getting in @_ihmirr_?