At the beginning of the 2021 season, freshman Brylee Klosterman hit ninth in the Hawkeyes lineup. Now, she’s Iowa’s leadoff hitter. 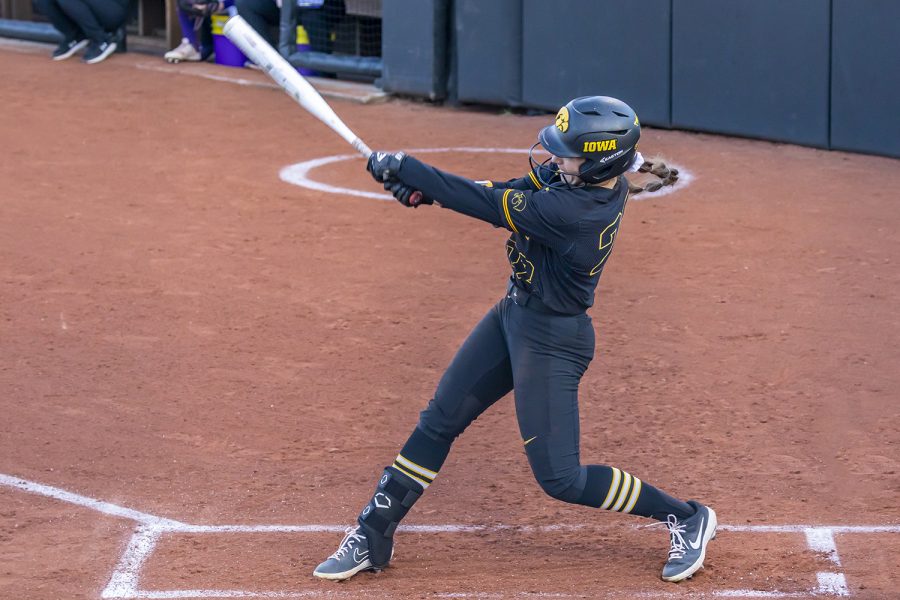 Ahead of Iowa softball’s series with Rutgers this weekend, Hawkeye freshman Brylee Klosterman has settled into her role at the top of the Iowa lineup.

Klosterman began the 2021 season hitting out of the No. 9 spot in the Hawkeyes’ lineup. Since then, she’s become Iowa’s leadoff hitter.

“With being the leadoff batter, I just want to get on for my team, so they can bring me around,” Klosterman said. “And when I do come up again, I can bring them around to score them also … It was a pretty big role to fill, but going from nine to one, nothing changes. You’re still up at the plate, you’re still facing the same pitcher, you’re still on the same team.”

Batting leadoff is nothing new to Klosterman, who did so during her time at Iowa City Liberty High School.

“[Klosterman is] a great leadoff,” Hawkeye head coach Renee Gillispie said. “And she’s been that way in high school, so she’s used to that position … She just does a great job of seeing good pitches and making good decisions at the plate.”

While her transition from high school to Division I softball has not been seamless, Klosterman has still made an immediate impact in the Black and Gold. In 27 starts this season, Klosterman has manufactured a .250 batting average and a .634 on-base percentage.

“Confidence has really been the biggest thing for me this year,” Klosterman said. “It’s a lot different than high school, obviously. There’s better competition, a lot of competition within the team as well, so I think just being confident has really helped me step up my game.”

Heading into their four-game series against 7-25 Rutgers this weekend, Klosterman and the Hawkeyes’ overall record sits at 16-16.

Iowa has dropped its last three series, falling to Wisconsin, Northwestern, and No. 24 Minnesota in that order.

“It’s been a struggle,” Gillispie said. “The pitching was on early in the season, they were dominating and shutting people down, and we couldn’t get our offense going at all. But I think it’s just finding the way to put the pieces together. Our pitchers were getting frustrated because we weren’t hitting. And hitting takes a while to get going because we didn’t have a fall [season] and getting ready into the spring, we had the first 20 games as our fall season. So, our hitting’s now coming around, and now we’ve got to get the pitchers back on track again.”

Despite their struggles, the Hawkeyes remain confident ahead of their weekend tilt with the Scarlet Knights.

“We just need to continue to stay confident,” freshman first baseman Denali Loecker said. “We’ve had a tough series these past couple series, so going in just believing that we can win, and just competing, and having lots of energy is what’s going to carry us.”

Iowa and Rutgers start their four-game series on Friday at 2 p.m. in Piscataway, New Jersey. The Scarlet Knights and Hawkeyes will play two games Saturday with the series finale to follow on Sunday. All of this weekend’s Iowa-Rutgers games will stream on BTN+.