The 54-hole tournament will take place from Friday to Sunday at Crooked Stick Golf Club in Carmel, Indiana. 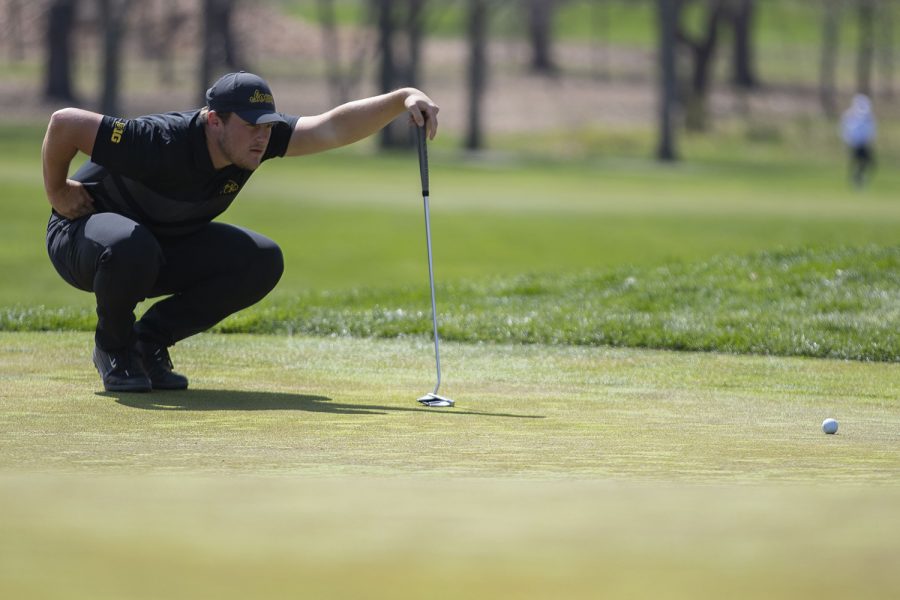 Iowa's Alex Schaake lines up a shot during the men's golf Hawkeye Invitational on Saturday, April 17, 2021 at Finkbine Golf Course.

The 39th-ranked Iowa men’s golf team will play in the Big Ten Championship this weekend at Crooked Stick Golf Club — a track that has hosted multiple PGA Tour events, including the 1991 PGA Championship won by John Daly.

2021 Big Ten Men’s Golf Championship live scoring will be available on GolfStat.com throughout the 54-hole event.

Leading the Hawkeyes into the postseason is senior Alex Schaake, who enters the Big Ten Championship fresh off four-straight top-five finishes.

In an interview with The Daily Iowan, Schaake said he’s playing at a higher level right now than he was two years ago when he won the 2019 Big Ten Men’s Golfer of the Year award.

“I have grown up so much since,” Schaake said. “Even though I won player of the year that year, I feel like my consistency this year is way better. I didn’t play very well in the first tournament [this year] in South Carolina, but I knew I was hitting the ball really well.”

Schaake, who describes himself as a super-competitive person, is excited to test his game against the Big Ten’s best golfers before he and the Hawkeyes travel to NCAA Regionals in mid-May.

Per GolfStat, Schaake is the 40th-best NCAA Division I Men’s Golfer in the nation. Illinois’ Adrien Dumont De Chassart and Michael Feagles are the only Big Ten golfers that rank higher than Schaake as individuals.

“Playing in a Big Ten Championship has a different feel,” Schaake said. “There’s just a little bit more added pressure and I like trying to test myself, to go out and try to prove myself with some really good competition from the Big Ten. And hopefully, I can recreate what my brother did in 2015, so he doesn’t have that on me anymore.”

In 2015, Alex’s older brother Carson won the Big Ten Championships as an individual, finishing the tournament at four-under-par. Carson Schaake co-medaled at the event with Illinois’ Nick Hardy.

Alex Schaake has never finished higher than 18th at the Big Ten Championship.

Joining Alex Schaake in the Black and Gold this week will be sophomores Mac McClear and Garrett Tighe, junior Gonzalo Leal Montero, and senior Jake Rowe.

McClear picked up an individual win at the Spartan Collegiate in Sea Island, Georgia, earlier this season, and Leal Montero has clocked in as high as No. 18 in GolfStat’s individual rankings.

Hawkeye head coach Tyler Stith believes that, if his team plays to its capability this weekend, it can claim its third victory of the year.

“It’s always about our process,” Stith said. “I just want us to be solid operators and stick to our routines and the same things that we do every day. Have a good strategy, good course management, have a good mindset on the golf course, being patient, and playing disciplined. If we do all those things, like we have at times this spring, really well, I have no doubt that this team will find itself in a position heading into the final round with at least a chance to win.”

Like his coach, Schaake is also confident in the Hawkeyes’ ability to top postseason leaderboards.

“If we’re all on our game the same week, it’s going to be scary,” Schaake said. “I think we’re one of the best teams in the country if that happens.”