The Hawkeyes will journey to Bob Kaufman Field in Bloomington, Indiana, this weekend for a three-game tilt with the Hoosiers. 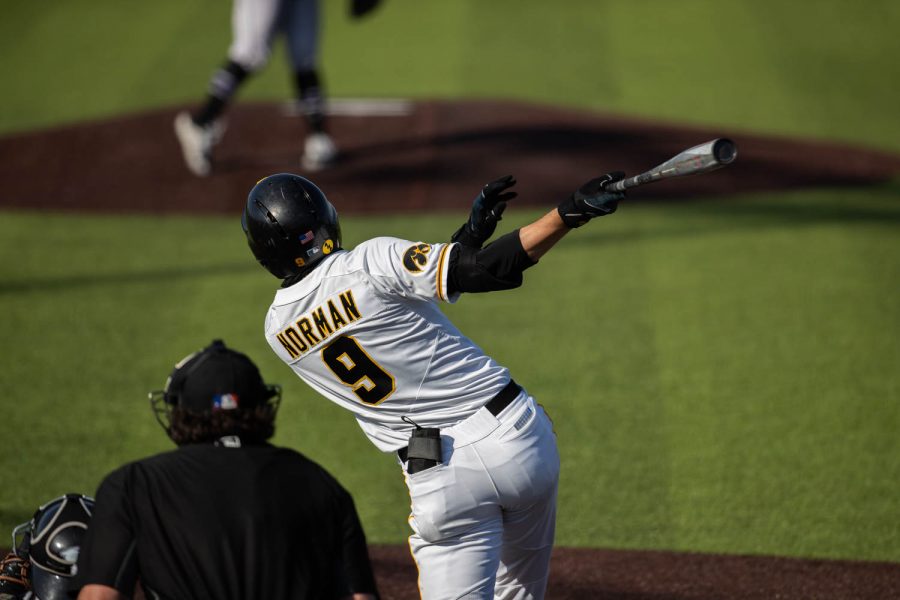 This weekend, Iowa baseball will journey to Bob Kaufman Field in Bloomington to take on Indiana.

The Hawkeyes will make the trip east short on rest. For most of the 2021 season, Iowa has had four days off between series. This week, the Hawkeyes only had three days to rest, recover, and practice before their first game against the Hoosiers.

The last contest of Iowa’s most recent four-game tilt ended Monday. The Hawkeyes downed the Wildcats in walk-off fashion, 12-9, to finish the weekend 3-1.

Today at 4 p.m., Iowa will play its first of three games against the Hoosiers.

“We’re usually off on Mondays, and we start up Tuesdays again,” senior outfielder Ben Norman said. “Honestly, playing on Monday is kind of nice because it kind of keeps you in that game rhythm, and keeps you even closer to that game on Friday. So, I don’t think it’ll be too big of a problem for us.”

Iowa has played four-game series the last two weekends, which, according to Hawkeye head coach Rick Heller, can really burn a team out.

“I will tell you that [four-game series] take a toll, especially when it’s all [Big Ten] games,” Heller said. “Every weekend takes a toll, and it’s stressful because every team you play is good. You’re playing a quality team every single weekend … The two four-game series in a row against really good teams — one of them on the road — there were guys that were really tired.”

Heller also noted that he changed his team’s weightlifting, rest, and practice schedules this week, taking the Hawkeyes’ short turnaround between series into account.

Over the last two weeks, Iowa has played two teams that currently sit in the top half of the Big Ten standings — Maryland and Rutgers.

Indiana’s 18-8 record is good for second in the Big Ten standings behind only 20-7 Nebraska.

The Hawkeyes are 18-11 on the season. So, Iowa could climb as high as second in the Big Ten standings with a three-game sweep of the Hoosiers.

“Without getting really deep into the scouting report, we all know [Indiana] has some really, really frontline arms,” Heller said. “We’re going to see three high-quality starters. The top five guys in their lineup are really good players. I don’t know a whole lot, since we didn’t play them last year, on the next four guys.”

“[Grant] Richardson, guys like that that we’ve seen, they’re tough and they’re tough at home,” Heller added. “[Bob Kaufman Field] plays small. So, that could work out to our favor this year. Who knows? You know, we’ve got some guys that can hit the long ball as well. We’re just going to have to pitch a lot better the first two games. If we do that, I feel like we can beat anybody in the country.”

Two of the three pitchers that are likely to start for the Hoosiers this weekend boast ERAs under three.

The Hawkeyes may enter their three-game tilt with the Hoosiers a little short-handed, as redshirt freshman first baseman Peyton Williams suffered an injury in Iowa’s win over Northwestern Monday.

During a postgame meeting with reporters on Monday, Heller said Williams likely injured his quadricep.

All three of this weekend’s Iowa-Indiana games will be streamed on BTN+. Saturday’s contest begins and 1 p.m. with the series finally to follow on Sunday at 11 a.m.