University of Iowa President Bruce Harreld is slated to give up $2.3 million in deferred compensation after he leaves May 16. On Thursday, he told the regents he hopes it will be used for a proposed project to relocate the cultural centers to the center of campus. 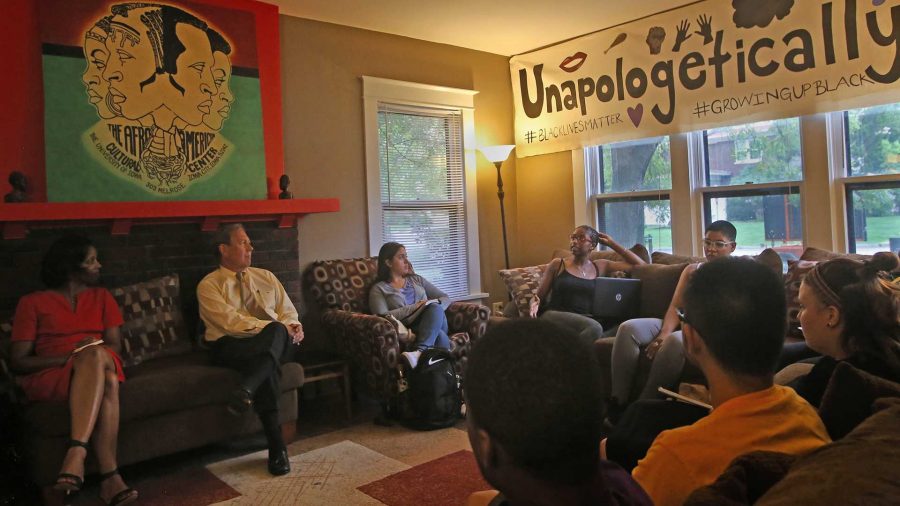 University of Iowa President Bruce Harreld listens to UI senior from Student Government Diversity Committee Chair Adetayo Oladele-Ajose during a meeting at the Afro-American Cultural Center on Monday, August 29, 2016. The group discussed both short and longterm plans for a cultural houses on campus. (The Daily Iowan/Joseph Cress)

Outgoing University of Iowa President Bruce Harreld told the state Board of Regents on Thursday he had “always planned” to use any deferred compensation for relocating cultural centers to the heart of campus. Harreld’s last day on campus is May 16, earlier than his initial contract renewal through 2023. He is forfeiting $2.3 million in deferred compensation.

Harreld told The Daily Iowan in 2017 that he and student government were having conversations about improving the cultural centers, conversations that included creating a Ped-Mall-like “cultural corridor” where the centers could all be in a central location.

To the regents on Thursday, Harreld said he hoped they would strongly consider the proposal once it crossed their desks, which he said would bring the west-side cultural houses “from the fringes of our campus to Hubbard Park.”

“I just want to remind some of you, politely, that Mary and I have always planned on giving that back those funds, back to the university specifically to assist the university in relocating our cultural houses to Hubbard Park,” Harreld said. “Hubbard Park, as most of you know, is right in the center of our campus, which is where I think the cultural centers belong.”

Harreld’s last day is May 16, and the regents met Thursday and will meet Friday to interview and evaluate four finalists to be his successor. A new president is expected to be announced on Friday at 4 p.m.

Harreld acknowledged, however, that he would be giving up control over where to put the funds.

“And while obviously Mary and I have lost control of those funds, when it comes before you, it’s our fervent hope that the board will look very favorably on this proposal to relocate our cultural houses from the fringes of our campus to Hubbard Park and the proceeds of our long term incentive… be used to assist in funding this effort,” he said.

A November 2020 Campus Planning Committee meeting note document described the project as “A neighborhood of the Cultural Centers” that has been  envisioned to “create autonomy yet collaborative space in a more central location on the main campus.”

The notes identified the southwest segment of Hubbard Park as “an optimal location.”

The Campus Planning Committee is an 18-member committee that plans improvements for campus buildings and other physical campus structures.

In an emailed statement on behalf of the UI emailed to the DI by Assistant Vice President for External Relations Jeneane Beck, the university needs to receive permission from the state Board of Regents to proceed with planning, as with any construction project. Plans have not yet been brought to the regents.

The UI would also need to coordinate with other campus areas, such as the Center for Advancement, for philanthropic support on new major campus projects.

“The university appreciates President Harreld making the Cultural Centers a priority during his tenure,” the statement read. “Like with all major campus projects, the university would need to coordinate with Center for Advancement to determine potential philanthropic support and with Campus Planning and Development.

“Their work includes evaluation of space uses, benchmarking of space standards, both within the university and with peer institutions, and coordination of project-specific programming.”

According to the most recent meeting notes of the Campus Planning Committee, the committee discussed that plans to relocate the cultural houses to “main campus” would allow the UI to potentially build a parking structure to accommodate hospital staff and patients.

At the meeting on Thursday, the regents passed a resolution praising the outgoing head Hawkeye, whom they selected in 2015. The nine-member board’s resolution gave a nod to the signing of the $1.65 billion public/private partnership with private energy conglomerate Engie and Meridiam to operate the university’s utility systems. The agreement, which has distributed $9.5 million in funding this year, is expected to distribute $15 million every year to fund strategic projects.

The regents also wrote that as 21st president, multiple construction projects were started and/or finished including the Stead Family Children’s Hospital, the College of Pharmacy, Catlett Residence Hall, Hancher Auditorium, and the Stanley Museum of Art. In fiscal 202, the regents noted, the UI reached a record-breaking $666.2 million in external funding, such as research grants.

Harreld thanked the regents for the comments.

“All the accomplishments that were just mentioned a few minutes ago, in no way refer to me alone,” Harreld said. “All great achievements are the result of great teams. And we have an incredible number of people on our campus who work hard, have a shared purpose and set aside their individual needs for the good of the institution. And this, your comments really reflect largely very largely on so many others, and I want to thank them.”