Where Hawkeyes are projected to go in the 2021 NFL Draft

Five Iowa football players were selected in last year’s draft, and the program could top that mark this weekend. 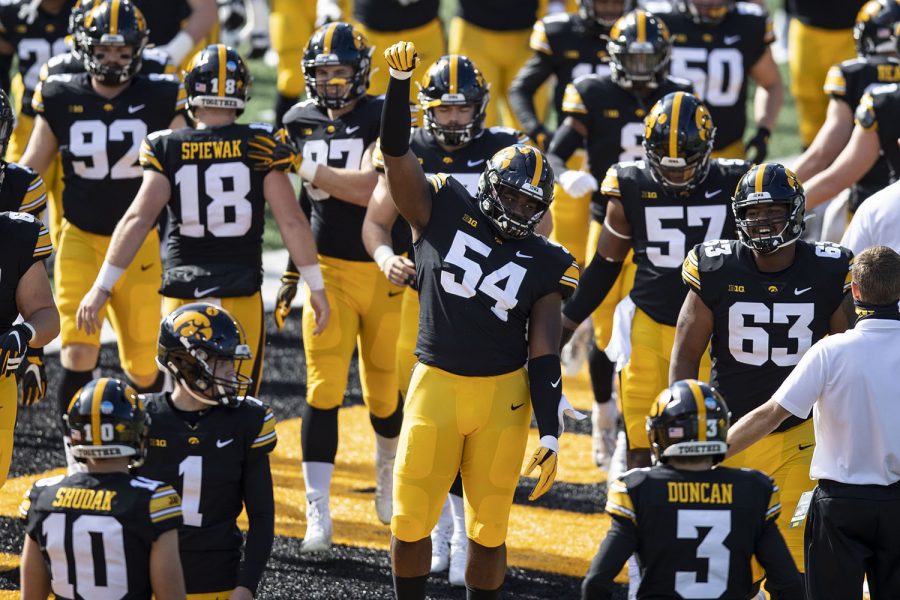 The Iowa football program has had a player selected in the last 42 NFL Drafts. From Thursday through Saturday, the Hawkeyes will bump that up to 43.

The 2021 NFL Draft kicks off Thursday night in Cleveland, Ohio, with the first round of selections. Rounds two and three will follow on Friday, and the draft will conclude Saturday with rounds four through seven.

At least a handful of Hawkeyes are expected to hear their names called this weekend. Here’s when those players might come off the board.

Nixon declared for the draft after a consensus All-American junior season. Once ESPN draft guru Mel Kiper Jr.’s top defensive tackle and No. 10 overall prospect at the end of the 2020 season, Nixon is now likely to be drafted on day two. Kiper Jr. does not list Nixon in the latest version of his first-round mock draft.

Pro Football Focus projects Nixon to be drafted in the fourth round by the Cincinnati Bengals, while Brugler sees Nixon as a third-round pick to the New York Giants. Ourlands predicts Nixon will go in the second round.

The 2020 Big Ten Defensive Player of the Year, Nixon tallied 13.5 tackles for loss and 5.5 sacks in eight games last season.

Golston was a first team All-Big Ten performer on the defensive line for the Hawkeyes last season. But he may have to wait his turn this weekend.

The two-year starter at Iowa is The Athletic’s No. 16 edge rusher prospect, and the No. 13 defensive end according to Ourlands. Golston is projected to go in the fourth round by both of those publications, and Pro Football Focus sees him as the No. 166 overall prospect, equivalent to a fifth-round pick.

Niemann’s breakout senior season (77 tackles in eight games, third-team All-Big Ten) may have worked his name into the draft. His brother, Ben Niemann, went undrafted in 2018 but has played for the Kansas City Chiefs the last three seasons.

The Athletic has Niemann going in the sixth round, while Ourlands projects Niemann to go in the seventh round. Pro Football Focus does not project Niemann to be drafted.

RELATED: ‘I was coming back for sure’: Despite NFL interest, Tyler Linderbaum was set on returning to the Iowa football program

One of the most dynamic playmakers in recent Hawkeye history, Smith-Marsette is now looking to run back kicks and catch passes in the NFL.

Smith-Marsette is projected to go anywhere from the fourth to seventh round this year. So day three of the draft will be an interesting one for the New Jersey native.

Smith-Marsette finished his Iowa career with 110 receptions for 1,615 yards and 14 touchdowns. He also ran for four touchdowns and averaged 28.8 yards per return as Iowa’s kick returner, scoring on special teams in back-to-back games to close the 2019 season.

Jackson started four years at left tackle for Kirk Ferentz and the Hawkeyes and was a first-team All-Big Ten selection last season.

Smith was injured for a portion of his junior season and underused at times as a senior, but when he was thrown the ball, he was one of the best red zone threats in the Big Ten. Smith caught 91 passes, including nine touchdowns, as a Hawkeye and consistently made receptions in traffic.

Ourlands graded Smith as the draft’s No. 25 wide receiver and projects him to go in the sixth round to the Los Angeles Chargers. Smith is the Athletic’s No. 53 wide receiver prospect, and the outlet sees him as a priority undrafted free agent.

The six players above, according to most outlets, are not expected to be drafted this weekend.

However, the expectation is that Beyer (No. 20 tight end prospect according to The Athletic), Banwart (No. 25 guard), Sargent (No. 42 running back), Heflin (No. 26 defensive tackle), Duncan (No. 7 kicker), and Wade (No. 46 linebacker) would all sign free agent contracts with NFL teams if they were not drafted.

The Athletic lists Beyer, Banwart, and Heflin as priority free agent targets if they are not selected.