University of Iowa presidential finalist Daniel Clay says higher education changed the trajectory of his life. Clay, currently dean of the UI’s College of Education, is the only internal candidate in the search – giving some faculty pause. 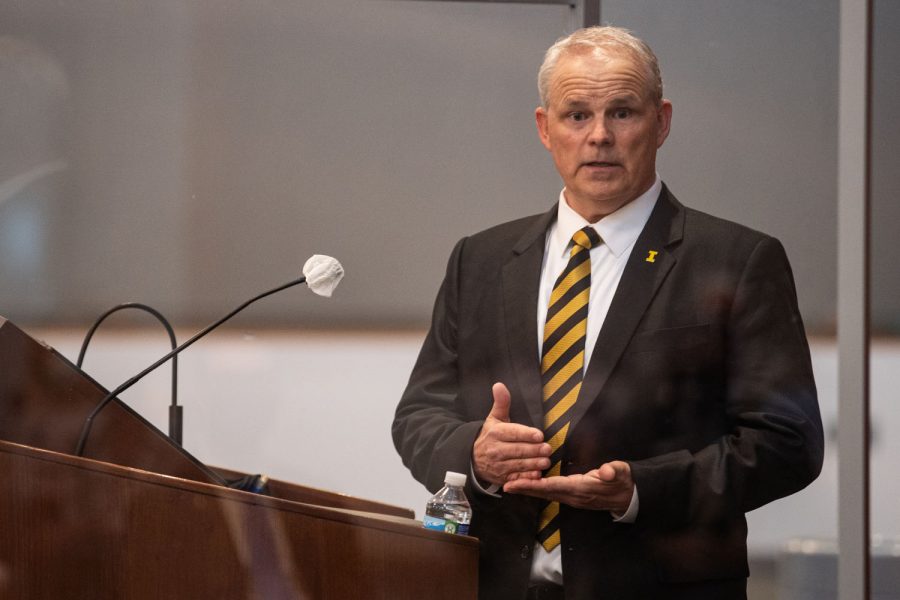 Dean of the UI College of Education Daniel Clay addresses spectators and answers questions at the Levitt Center for University Advancement on Thursday, April 22, 2021. Clay is one of four finalists to become the next president of the University of Iowa.

This profile of Daniel Clay is one of a series of profiles on the four finalists for the University of Iowa presidency. The head Hawkeye, slated to be announced on Friday, will oversee a 31,730-student, 25,287-employee institution with a sprawling health care system and a reputation as a writing university. Read about other finalists Penn State Law Dean Hari Osofsky, University of Illinois Systems Executive Vice President Barbara Wilson, and Georgia State University Provost Wendy Hensel.

Higher education changed the trajectory of Daniel Clay’s life. Now one of four finalists for the University of Iowa presidency, Clay recently attributed his success in higher education to the mentors and donors who supported him as a first-generation college student with potential but without means.

Clay, currently the dean of the UI College of Education, said in a forum on April 22 that he is uniquely qualified to take on the position of head Hawkeye because he has already been a leader at the university for six years.

“College changed my life because it challenged me and expanded my world views in ways that were sometimes really uncomfortable, and at the time I didn’t understand but now I do,” Clay said in the forum. “It introduced me to the arts and the humanities and sciences.”

Clay is the only internal candidate in the search. The UI College of Education, which has almost 1,200 students, is ranked No. 48 for best Graduate Colleges of Education by the U.S. News and World Report.

He holds a Ph.D. in counseling psychology and an MBA from the University of Missouri.

Since the announcement of Clay as a finalist on Wednesday, the DI asked several College of Education faculty members to interview about Clay, but each sent an emailed statement to the The Daily Iowan or were not available for an interview.

Clay himself declined to be interviewed for this article. Three out of the four finalists declined an interview with the DI for this series of profiles.

Erica Lembke, interim dean of the University of Missouri College of Education, worked with Clay as a faculty member and department chair during his time at Mizzou. She said her experience working with Clay was very positive.

“I enjoyed his straightforward, no-nonsense approach. Add to that a great sense of humor and a keen vision,” she wrote in an email to the DI.  “He was driven to not only be a successful leader of our college, but to develop his own skills to take the college forward.

In an email to the DI, College of Education Staff Council Chair and Past Chair Judith Brewer and Brian Campbell, respectively, said they would support any faculty or staff member’s decision to pursue a greater leadership role at the UI.

“The College of Education Staff Council has appreciated Dean Clay’s responsiveness to requests and support for staff in the college by providing budget for professional development,” Brewer wrote in a statement to the DI.

UI Professor Jodi Linley, chair of the Faculty Advisory Committee in the College of Education, wrote in a statement to the DI that she works with Clay on college-level issues such as budget decisions and policy communications.

Clay consults the committee whenever he has a decision in mind to present the idea to faculty and hear their responses, Linley wrote.

“He is responsive to feedback and appreciates FAC bringing any questions, issues, or concerns among faculty to his attention,” Linley wrote.

According to a letter from UI Provost Kevin Kregel, Clay was reappointed to his dean position on Jan. 13. He was appointed to serve through 2026.

In his letter, Kregel said Clay had achieved recognition as a campus-wide “thought leader,” and developed strong external relationships and an enhancement of scholarly growth and productivity.

Leadership at the University of Missouri

In his campus forum on April 22, Clay spoke about his experience working at the University of Missouri in 2015 when students protested racism on campus for several months, leading to the resignation of chancellor R. Bowen Loftin and president Tim Wolfe.

“When I was at the University of Missouri, I was there during the student protests, and we had a lot of students in our community from the Ferguson area after Michael Brown was killed — they were scared, angry, they were confused, and they wanted to talk,” Clay said during his forum. “And our campus leadership at the time failed to listen.”

Clay was one of nine deans who signed a letter calling for Loftin’s removal, according to the Kansas City Star.

“Our college was seen as a leader on campus during that time in terms of communication with our students, faculty, and staff,” Lembke wrote. “Dan had a close relationship with his academic leadership team and they completely supported efforts to personally connect with students (as an example) during that time.”

On his CV, Clay describes himself as having extensive experience as a “business founder/co-founder and investor.”

The business ventures listed on Clay’s CV include co-founding Intellisee, a UI-based start-up company that offers AI security products. Clay, who is on the Board of Directors, co-founded the venture with UI Provost Kevin Kregel, and several other Iowa researchers.

He also founded Mizzou Academy, a K-12 correspondence program. According to the Kansas City Star, the academy is currently being sued by High School Servicos Educacionais, a Brazilian education firm, which alleges that Mizzou K-12 violated the terms of its contract, and plagiarized content from the company.

Clay is not named as a defendant in the suit.

He is also involved in an ongoing lawsuit, filed by Pam Ries, who is suing the university for gender, age, and pay discrimination. Then 63-year-old Ries led REACH, a transitional program based in the College of Education for students with cognitive and learning disabilities, from 2013-17.

Ries alleges in the suit that Clay gave her the choice to retire from her position or be fired, though she had received positive performance reviews from the previous dean, and praise from UI President Bruce Harreld.

According to the court documents, Ries alleges she was fired and replaced by a younger man who was paid more money than she had been in the same role.

Ries alleged in the suit that Clay demoted other older workers in the College of Education and replaced them with younger employees.

“The University of Iowa categorically denies the allegations made by Dr. Ries, and is vigorously defending the lawsuit.  We look forward to the presentation of the University’s defense in court by the Attorney General’s Office,” the university said in a statement.

The trial is scheduled to begin Dec. 13 in Polk County.

Regan Smock, president of UI Undergraduate Student Government, said that — while initially she was hesitant about Clay’s experience as an internal candidate — she was impressed by his comments.

“I think he has, in some ways, convinced me that an internal candidate would be really good for the University of Iowa and in other ways just shown how much his experience at the College of Ed has made him a great leader — a lot of different people and different experiences,” Smock said.

Smock said she appreciated that Clay’s academic experience is in the field of education, having worked for two years as the director of academic affairs for USG.

“Sometimes faculty value teaching second. Teaching might be a stop on the way to your tenure or your research position,” Smock said. “I think that a big pro for me, especially in my old role and having that perspective, is to have someone who values education.”

Loren Glass, president of the University of Iowa chapter of the American Association of University Professors, said although he was impressed with all of the candidates, he was more impressed by the first three finalists that visited campus than Clay.

Glass said the rollout of the candidates reminded some faculty of the hiring of current UI President Bruce Harreld in 2015. Harreld, a non-traditional candidate without prior academic experience, was the last candidate brought to campus — speaking in a public forum on Monday and named the next president on Thursday.

Harreld was largely unpopular among faculty, with just 1.8 percent of faculty surveyed responding that they thought he was qualified for the job.

“I’m not privy to the decision-making process behind that, but to have three very qualified women, and then one white man, who looks like an inside candidate — that was destabilizing for me,” Glass said. “But I think Clay was very good in his speech and questions.”

During his forum, Clay said the biggest challenge he would face as an internal candidate would be to assume he already knows everything about the university.

“I think the most important thing for any president is to spend the first 100 days or so listening — and not listening for you to stop talking so I can tell my story, but listening to learn,” Clay said.

David Cwiertny, professor of Civil and Environmental Engineering, said he would prefer an external candidate to bring new thoughts and ideas to the university.

Cwiertny met with the four finalists as part of a group of faculty with the Office of the Vice President for Research.

“I think we should use this as a chance not to look internally. We have a lot of positions that have been filled internally, sometimes without searches,” he said. “I think there’s a lot of worry in the faculty and the staff, and others at the university, after the last search, that this is some sort of predetermined outcome, and I think some look warily at Dean Clay in that regard.”