The University of Iowa Presidential Search Committee could not ask questions relating to a candidate's race, religion, sexual orientation, national origin, physical disability, health, age, or familial status during the search process to find the UI’s next top leader. 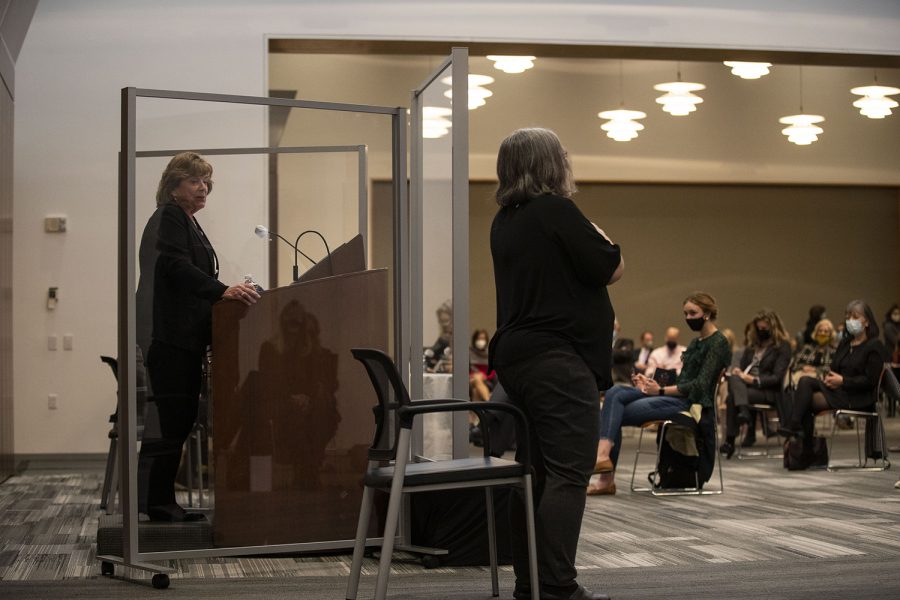 Katie Goodale for The Daily Iowa

Unlike the 2015 University of Iowa presidential search, which featured four men, three of the four finalists are women. Some University of Iowa community members lamented the lack of people of color among the four finalists. However, the UI Presidential Search Committee did not request information about the candidates’ identity in efforts to diversify the candidate pool for the UI presidential search.

Co-chair of the UI Presidential Search Committee Sandy Daack Hirsch wrote to The Daily Iowan that the committee does not know the complete status of any of the presidential applicants, including the four finalists.

“It would be wrong for us to include or exclude anyone in our pool,” Daack-Hirsch wrote. “However, we understand that this can be challenging when we want the pool to represent all of the wonderful ways in which people are diverse.”

“The campus in people’s mindsets and thinking about these things change over time,” Keller said. “I would certainly imagine that the job description and leadership attribute that was put in place for when Mary Sue Coleman was applying for the President’s job back in ‘95 would be much different than they are now.”

The UI Presidential Search committee could not ask, directly or indirectly, questions that relate to race, religion, sexual orientation, national origin, physical disability, health, age, familial status, or any other particular as described in the UI’s non-discrimination statement, Daack-Hirsch wrote in an email to the DI.

Josh Lehman, the regents’ senior communications director, wrote in an email to the DI that AGB Search, who was hired to assist the committee and the Board with the recruitment of candidates, has a strong history of helping in the hiring outstanding university presidents.

“We are very pleased with AGBs efforts to recruit as diverse a pool of candidates as possible, and are extremely happy with the quality of the candidates that applied,” Lehman wrote.

RELATED: The next steps of the University of Iowa president search

“The Presidential Committee was hired to work with AGB because of their 50 percent placement rate for women and people of color into presidential and chief executive offices,” Daack-Hirsch wrote. “The Presidential Search Committee and partners advertised the position to a diverse and wide spectrum of places where potential candidates can have access.”

Daack-Hirsch wrote that AGB Search communicated directly with more than 2,900 people about this search, with leaders and members of more than 20 higher-education organizations, and posted the presidential leadership profile at venues including:

Keller said the topic of diversity was front and center in every one of the listening sessions that the committee held.

“Diversity, equity, and inclusion is an issue that has been highlighted in the current university strategic plan and in the upcoming new strategic plan that’s being developed now,” Keller said. “It’s just something that has almost become standard practice.”

Moala Bannavti, President-elect of the UI Graduate and Professional Student Government said she has been following the UI presidential search closely. She said a university president does not have to come from a diverse background to understand that diversity is important to fight for.

“I was looking more for diversity and experience than ethnic diversity. I’m a Black woman and I would have loved to see more ethnic diversity, but the fact that there wasn’t any didn’t bother me as much as the lack of experiential diversity,” Bannavti said.

Sally Johnstone, president of the National Center for Higher Education systems said evidence shows open searches can lead to limiting the size of the candidate pool. The UI has conducted open presidential searches since the 1995 search that resulted in the hiring of former UI President Mary Sue Coleman.

Louisiana State University was involved in two lawsuits of a violation of Louisiana’s public records law after withholding names of candidates for a top university position. Louisiana State is currently in the search process to select a new president. The university did release the names of the candidates.

“When a sitting president says, ‘Oh I am interested in the University of Iowa,’ the Board usually takes that as a sign that they are no longer interested at the university at which they were,” Johnstone said.

Daack-Hirsch said the committee knew that there are some candidates that don’t want to put their name in because of the open search.

“We would accept a close search if that’s for the Board because it’s their prerogative, but campus accepts an open search, and I think that’s pretty true of most public universities. So, it’s an interesting dichotomy,” Daack-Hirsch said.

The Board of Regent is expected to select the next UI president on April 30.