New Faculty Senate officers were announced on Tuesday. Teresa Marshall, the new president of the Faculty Senate, said the new leadership would prioritize a “strong working relationship” with a new UI administration. 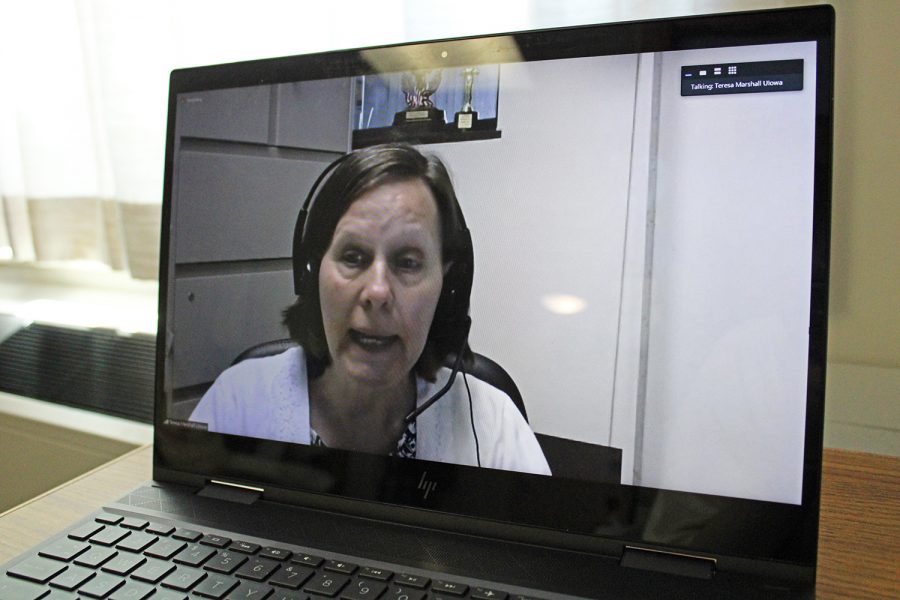 New leaders will take the helm of the University of Iowa’s faculty representative branches for the 2021-2022 year, along with a new UI president.

Following the traditional Faculty Senate system, Dentistry Professor Teresa Marshall was appointed as the new president after serving as vice president of the shared governance branch during the 2020-21 academic year, election results announced at the body’s Tuesday meeting showed. Associate Professor of Spanish Ana Rodríguez-Rodríguez will serve as this year’s vice president and Associate Professor of Nursing Melissa Lehan Mackin will be the next secretary.

Former Faculty Senate President Joseph Yockey, a professor in the College of Law, told the senate that the current vacancies will be filled in the fall 2021 semester.

In Marshall’s opening remarks as the new president, she told the senate that faculty representatives have identified better communication methods with UI administration to ensure continued importance placed on shared governance.

“A priority for Faculty Senate, and our officers, is to establish a strong working relationship with our new administration, to facilitate communication and informed decision making with faculty perspectives,” Marshall said.

After the state Board of Regents selected Harreld as the university’s next top leader in 2015, faculty condemned the appointment. Harreld, a former business executive, was largely unpopular among faculty as a candidate, scoring the lowest out of the four candidates as “qualified” for the position. The search for Harreld’s successor is expected to come to an end on Friday, when the regents are scheduled to announce the next president. Unlike the 2015 search, each finalist boasts academic administrative experience.

Another issue both Yockey and Marshall mentioned in their remarks was the recent questions about free speech and tenure policies from the Iowa Legislature.

“Tenure is first and foremost about academic freedom, but the security of the position that tenure affords is also critical for protecting faculty rights and governance,” Yockey said. “…We should be positive examples. We should be fair minded, evidence based, and vocal about both the bad and the good.”

Yockey encouraged the new Faculty Senate to be vigilant, active, and informed. As the UI prepares for a new president to take the helm of the university, he said he can’t wait to see what the shared-governance branch accomplishes.

Yockey will serve in the 2021-22 academic year in an officer role as the past president for the Faculty Senate.

As Marshall moved into her new position, she reminded the Faculty Senate to recognize the impact the COVID-19 pandemic has had on academia and faculty as individuals.

“By nature, faculty are resilient creatures,” she said. “We wouldn’t have survived graduate or professional school, early course evaluations, grant reviews or manuscript rejections without developing resilience. It’s in our nature to take a moment and evaluate feedback…We need time and space to regroup and continue our individual and collective mission.”