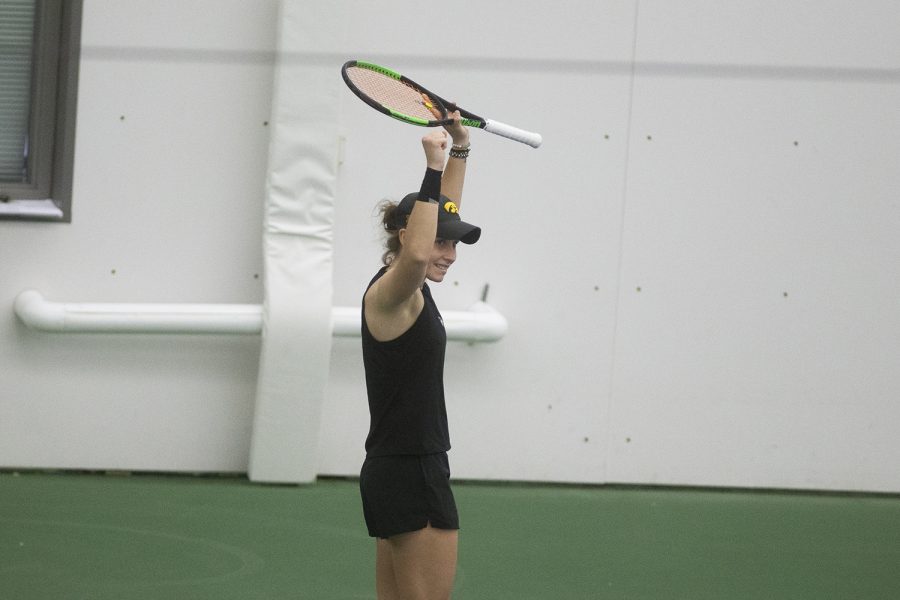 UI senior Elise van Heuvelen Treadwell pumps her fists after winning her singles match at the women's tennis meet against Nebraska on Sunday, March 28, 2021. The meet was the labeled as "senior day," which was also the 2021 home finale meet. The Hawkeyes defeated the Nebraska Huskers 4-2.

As the No. 4 seed in the west division, the Iowa men’s tennis team will face Michigan State in the opening round with a chance to take on top-seeded Ohio State in the quarterfinals.

The women’s standings are not split into east and west divisions. After earning the No. 4 seed in the tournament, the Iowa women’s tennis team drew an automatic trip to the quarterfinals.

“You just know with postseason play that if you lose, you’re out,” senior Elise van Heuvelen Treadwell said. “I think it just makes it more exciting because these are the times we practice for and live for.”

Senior Kareem Allaf will head into Thursday’s match fresh off of receiving first-team All-Big Ten honors for the second season in a row.

The Dubai, United Arab Emirates, native is the first player to earn All-Big Ten recognition in consecutive seasons since Stuart Waters did so in 2002 and 2003.

Allaf is also the first player to earn all-league honors in three consecutive seasons since Tyler Cleveland achieved the feat in 2001 and is only the fourth player in program history to do so.

“They still need to put up my banners from last year,” Allaf said. “I’ve done a lot for this program, and I’ve done just as much as any player who has come through.”

Iowa’s last matchup against Michigan State ended in a demoralizing 4-3 loss at home. It was the third loss of an eight-match skid that the Hawkeyes went through during the second half of the season.

“Michigan State and Nebraska were two of our worst losses,” Allaf said. “Obviously that hindered our season a lot because it was a match we were expected to win very smoothly…We should try and beat them 4-0 this time and not hang around and wait for them.”

With only five wins in the regular season, an early exit this week would almost certainly mean the end of Iowa’s season and the end of the Iowa men’s tennis program.

The program will be discontinued after this season as the result of financial troubles in the athletics department from the COVID-19 pandemic.

“There’s no pressure really,” Allaf said. “We didn’t have the season we wanted but that is what it is.”

The women’s team is in a much different situation from the men.

The Hawkeyes come into the postseason having set the program record for conference wins in a season with a 12-4 record. With a No. 42 national ranking, the Hawkeyes are on the bubble to make the NCAA Tournament if they do not win the Big Ten Championship.

“We all know the importance of this tournament with postseason play,” van Heuvelen Treadwell said. “The focus is on the first match on Friday and then just moving forward from there.”

Rutgers, Maryland, and No. 48 Nebraska are all programs the Hawkeyes went undefeated against in the regular season, and Iowa is confident that it can repeat those performances again.

“They have been really tough matches even though the score might not reflect that,” van Heuvelen Treadwell said. “[Nebraska] is a really good team. They’ve improved a lot, but I just think we have practiced well, we’ve trained very hard… and we just know what we have to do.”