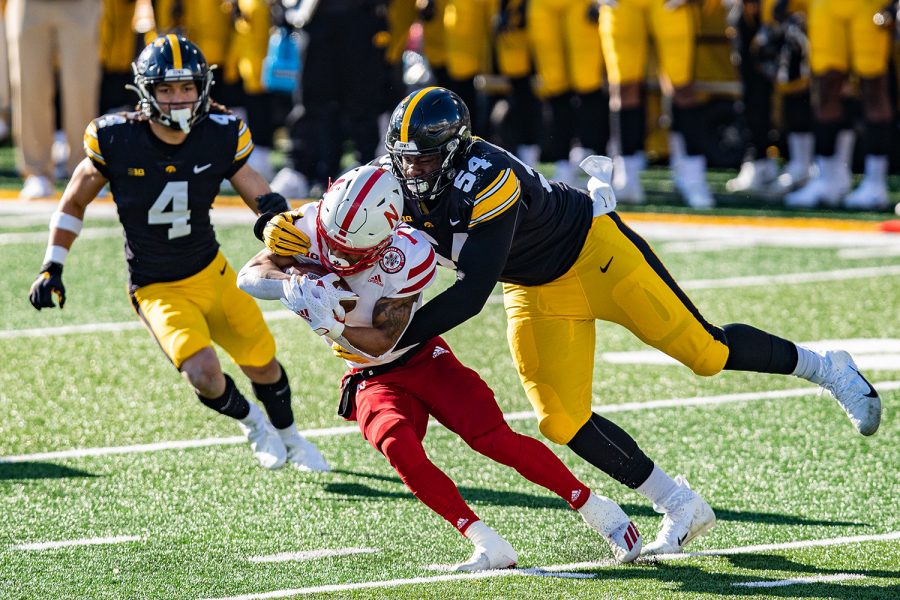 Point/Counterpoint | How many Hawkeyes will be selected in the 2021 NFL Draft?

Six Hawkeyes will be drafted

I suppose this is where constantly reading NFL mock drafts comes in handy for me.

During the first round of last season’s draft, I had a story prepared in case offensive tackle Tristan Wirfs was drafted No. 4 overall by the New York Giants (he ended up going 13th to the Tampa Bay Buccaneers, which worked out just fine). I don’t think I will be as busy on the first day of the draft this year.

But plenty of Hawkeyes will still hear their names called between Thursday and Saturday.

All-American defensive tackle Daviyon Nixon will likely be the first Iowa player selected this year. At one time Nixon was ESPN draft guru Mel Kiper Jr.’s No. 10 overall prospect, but for whatever reason Nixon’s name has cooled off since then.

I’d expect Nixon to go sometime in the second or third round. After that, it’s a guessing game.

The predictions on the five players listed above are all over the place. Most projections have all of them sprinkled throughout rounds four through seven. Some analysts don’t project Smith to be drafted, but I’d figure some team will pick up on his elite ability to make contested catches.

There are other Hawkeyes who could be drafted, including running back Mekhi Sargent, defensive tackle Jack Heflin, tight end Shaun Beyer, offensive guard Coy Cronk, kicker Keith Duncan, and offensive lineman Cole Banwart. I think all those players will end up in NFL training camps. But I don’t think they’ll be drafted.

Me being wrong is a strong possibility though. So, tune into the 2021 NFL draft starting Thursday and follow The Daily Iowan’s coverage of the draft.

Five Hawkeyes will be drafted

With the NFL Draft slated to begin just one day from now, the professional dreams of some former Iowa football players will be realized, while others’ futures will remain uncertain.

Of those players, five are likely to be drafted.

Daviyon Nixon appears to be a shoo-in, projected by some to be a first-round draft pick prior to the end of the 2020-21 college football season — though many draft experts have since flexed Nixon into a second or third-round pick since.

Smith-Marsette also seems to be a sure-fire late-round draft pick, given his explosive playmaking ability both as receiver and a returner on special teams.

Smith has a good chance to be drafted too. His 6-foot-2 frame and ability to corral jump balls make him a great red zone weapon for NFL teams.

The recent success of Iowa offensive linemen and defensive players in the NFL will likely help Jackson and Golston land on NFL rosters this fall as well.

I don’t think Cronk, Niemann, or Beyer will be selected in this year’s draft.

Cronk’s injury problems may sway teams from spending any draft capital on him.

Beyer wasn’t the best tight end on the Hawkeyes’ roster last season — that title goes to Sam LaPorta. I don’t think NFL franchises are willing to spend a draft pick on a player that wasn’t even the best at his position on his college team.

The first round of the 2021 NFL Draft begins at 7 p.m. Thursday, with subsequent rounds to follow on Friday and Saturday.