The women wrapped up their season at the Big Ten Championships while the men tuned up for their conference tournament at the Robert Kepler Intercollegiate. 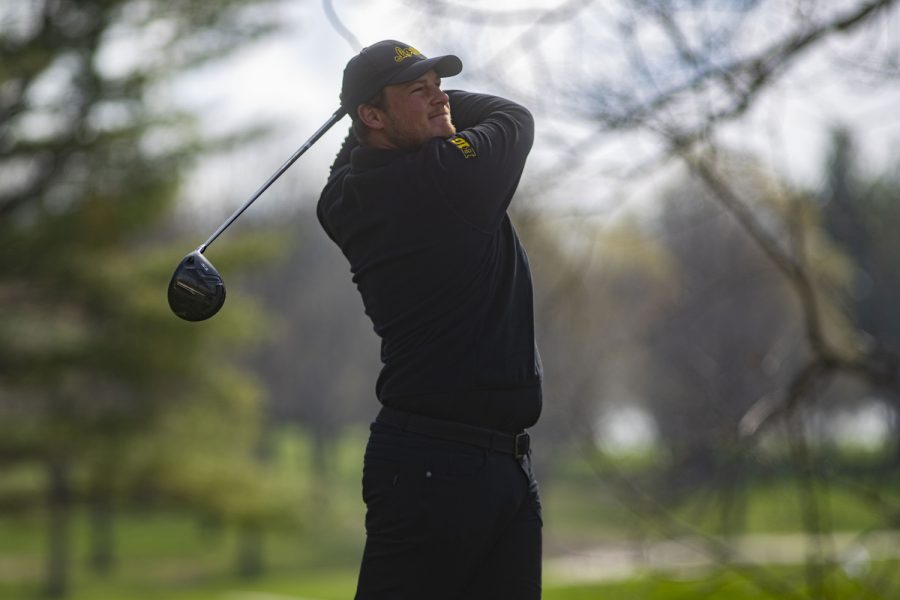 The No. 39 Hawkeyes found themselves alone in second place on Ohio State’s Scarlett Course, trailing eighth-ranked Illinois by just seven shots with nine holes to play, but faded to finish the tournament in a three-way tie for fourth place.

Over the final nine, the four Iowa players whose scores counted toward the team total tallied just two birdies combined against nine bogeys, playing the final stretch in seven over par.

Stith was happy with the fight his team showed to get into contention even though Iowa couldn’t win the event.

Iowa began the final day in sixth place, 13 shots behind the leaders.

“We didn’t play our absolute best on during first two rounds,” Stith said. “But the guys managed to just fight and grind the whole day [Saturday]. We finished Saturday afternoon’s rounds strong, and we moved up and kind of got ourselves back and to contention. We continued our strong play on Sunday morning and were in solo second with nine holes to play, and I just think we just kind of ran out a little bit of steam.

“I’m really proud of the way the guys worked this week. I mean everybody was grinding. I think the experience that we gained play that golf course is going to serve us well heading into the Big Tens this week.”

Senior Alex Schaake continued his run of stellar play with a runner-up finish to Kent State’s Cade Breitenstine for the individual title. Schaake tied with Jeff Driscoll of Northwestern for second place.

Schaake, an Omaha, Nebraska, native, carded a closing round of one-over-par 72 to conclude the 54-hole event at one-under-par. On the final day, Schaake never got to within less than two of Breitenstine’s lead, who finished at three-under-par.

“I played really well,” Schaake said. “I knew that going to the Scarlet Course, the course was really tough and somewhere around even-par every round would be really good and beating a lot of the field. I’ve played there multiple times throughout college. So there’s usually never more than four or five guys under par and this week, there were only three. I knew if I got under par, somehow that down the stretch, I would have the chance to win.”

The reigning Big Ten Player of the week, following his individual title at the Hawkeye Invitational in Iowa City April 18, played his final nine holes in two-over-par with two bogeys and seven pars.

“All week I put myself in some really good spots off the tee, and I was driving really well,” Schaake said. “But that back nine for some reason, that last round, I really just wasn’t putting myself in the perfect spots to attack any pins. I was scrambling a little bit, that’s why I didn’t make a single birdie on the back nine there.”

Despite his struggles, Schaake said he still believed he could pull out a victory until the final putt dropped as Brieitenstine played his final nine holes in three-over-par.

The Robert Kepler Intercollegiate marked the fourth-straight top-five finish for the 2019 Big Ten Men’s Golfer of The Year, who said he’s playing better right now than he did two seasons ago.

Sophomore Garett Tighe turned in the second-best Iowa total for the week. In his first team action of the year, the Algonquin, Illinois, native finished in a tie for 25th at seven-over-par.

Tighe, who cracked the starting lineup after impressing the coaches with a good showing when he played as an individual at the Hawkeye Invitational two weekends ago, totaled ten birdies over the three rounds in Columbus, leading the team.

Meanwhile, the women’s team finished 10th out of 13 teams at the Big Ten Championships this weekend at TPC River’s Bend in Maineville, Ohio.

After missing Iowa’s most recent tournament with a wrist injury, freshman Klara Wildhaber tied for 24th in her return to action. She and sophomore Morgan Goldstein, who finished in the same position, led the way for Iowa.

The lefty from Switzerland is right on the bubble to make NCAA Regionals as an individual and will have to wait until Tuesday to see if she made the cut.