The Terrapins defeated the Hawkeyes, 8-6, at Duane Banks Field in Iowa City Saturday. 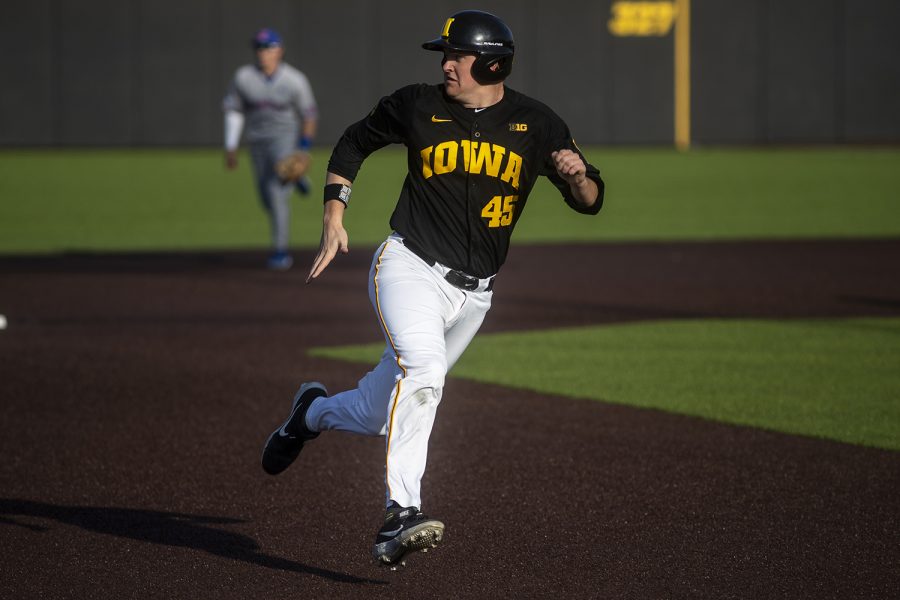 Iowa first baseman Peyton Williams watches where the ball is while racing to third base during a baseball game between the Iowa Hawkeyes and the Kansas Jayhawks on Tuesday, March 10, at Duane Banks Field. The Hawkeyes defeated the Jayhawks, 8-0.

On a sunny and windy Saturday at Duane Banks Field in Iowa City, Hawkeye baseball’s starting second baseman, Izaya Fullard,  stepped into the batter’s box in the bottom of the ninth inning with two of his teammates — center fielder Ben Norman and shortstop Brendan Sher — on first and second base, respectively.

As Fullard began his at-bat routine with his walk up song — Trey Songz’s “Bottoms Up” — playing over Duane Banks Field’s sound system, the Hawkeye faithful in attendance waited with bated breath to see if the North Liberty, Iowa, native could tie the game or cut the Hawkeyes’ 8-5 deficit down.

Fullard’s contact brought Iowa’s fans to their feet. The ball he had hit, however, was not destined to leave the yard, as Maryland’s left fielder, freshman Matthew Shaw, caught Fullard’s ball on the warning track in center field.

As Fullard headed toward the dugout, Hawkeye first baseman Peyton Williams got his first crack at Bello. After fighting to a 2-2 count with Bello, Williams drove a ball deep to right field. Once again, the Terrapins made a catch on the warning track, retiring Williams.

With Williams and Fullard down, Hawkeye catcher Austin Martin needed to reach first base to extend Saturday’s game. Like Williams and Fullard, Martin drove a ball to the warning track. Terrapin center fielder Chris Alleyne caught the ball Martin hit, ending the game and dealing the Hawkeyes an 8-6 loss.

“It was a bad day,” Hawkeye head coach Rick Heller said postgame. “I loved the fight. We never gave up. We just kept coming after them. Most days, we hit two home runs in the ninth inning and we’re all celebrating. The ball Fullard hit was as hard as he could possibly hit it, and usually that’s across the road. The ball that Martin hit, same story. That’s over the batter’s eye, most days. The wind [was] just hawking in today, just bad luck for us.”

The Hawkeyes did have their share of opportunities to overtake the Terrapins Saturday. On the game, Iowa outhit Maryland, 9-12.

Including the ninth inning, the Hawkeyes stranded runners on base in six different frames.

“It’s just baseball,” Williams said. “It’s something that we know that, there’s a lot of things on our side that we can fix. If we can fix those things, we know we’re not gonna have to worry about those plays. We can’t really say those tough breaks are what cost us. We dug ourselves in our own hole, so we need to fix that and not worry about anything else. We need to control what we can control.”

Iowa trailed for the entirety of Saturday’s game, as Maryland took a 3-0 lead in the top of the first inning via a three-run home run off of Hawkeye hurler Drew Irvine and never looked back.

Even when the Hawkeyes cut the Terrapins’ lead to one run in the sixth frame, Maryland responded, hanging four runs on Iowa in the top of the seventh inning.

“When we came back and scored runs in the sixth, I think we scored three in the sixth, I felt like we were gonna come back and find a way to win the game,” Heller said. “Unfortunately, we went out, we didn’t have a shutdown inning. We gave up four in the seventh after we scored three. That was big … I knew we weren’t gonna quit. You know, we were gonna try to find a way back into it, but we just dug ourselves too big a hole.”

Iowa returns to Duane Banks Field Sunday afternoon for its first matchup with Northwestern this season. Action between the Hawkeyes and Wildcats will begin at 4:02 p.m. and air on the Big Ten Network.