We need to make sure Iowa’s redistricting process is completed with integrity this year, so we remain an example for the rest of the nation. 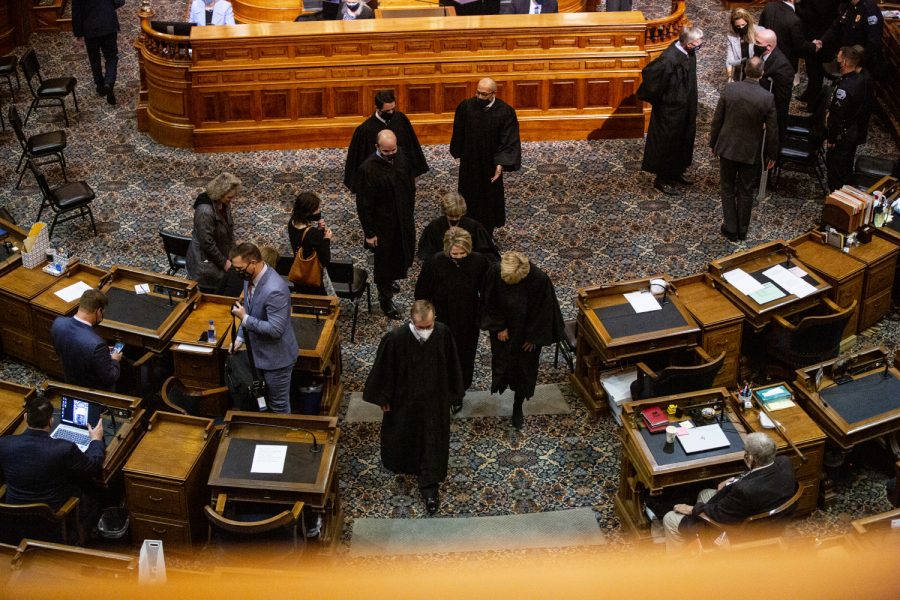 Members of the Iowa Supreme Court exit the house chamber following the State of the State address at the Iowa State Capitol on Tuesday, Jan. 12, 2021 in Des Moines. Gov. Reynolds highlighted in the address expansion of broadband internet, a push for in-person learning, and economic recovery from the COVID-19 pandemic.

Iowa’s voter redistricting process is unique and one of the fairest in the country, but it’s about to face a new challenge.

The delay in U.S. census results caused by the COVID-19 pandemic means that the state government will likely not pass a redistricting plan by its Sep.15 deadline.

Under the plan, members of the Iowa Legislature nominate Iowa residents to a nonpartisan commission which draws up the district map. When drawing the map, the commission prioritizes equal representation, contiguousness, and compactness. The commission is not allowed to consider political data like the addresses of incumbents, voter affiliation, or demographic data other than what is required by federal law.

Other states, like North Carolina, without these prohibitions have faced challenges to their maps based on racial bias, with citizens alleging that lawmakers intentionally diluted the power of the Black vote when drawing its 2011 map.

Iowa’s procedure is intended to reduce or eliminate gerrymandering, as seen in states with districts drawn by partisan legislatures. The Iowa Legislature still votes on the plan presented, but it can only amend a third plan if two rounds of proposals fail to pass by a yes or no vote.

In every redistricting since the procedure was adopted in 1980, the Legislature has approved one of the plans put forth by the commission without amendment. This has limited the influence individual legislators have in redistricting and has resulted in more competitive elections, and elections that more adequately represent the will of the people.

This year’s map must be confirmed and enacted by Sep. 15, or the Iowa Supreme Court will be given the responsibility to set districts by Dec. 31.

The Iowa Supreme Court released a statement on April 8 saying the court “tentatively plans to [implement] a process which permits, to the extent possible, the redistricting framework presently set forth in Iowa Code chapter 42 to proceed after September 15.”

The state Supreme Court should allow the Legislature extra time to enact its usual process. The extraordinary circumstances of the COVID-19 pandemic should be considered, but they should not disrupt the process that has worked so well in the past.

By contrast, states like Wisconsin face disputes to the maps drawn by partisan legislatures, with voters arguing that the Republican-controlled legislature suppressed Democratic votes. The Wisconsin map, which resulted in 60 of the 99 state Assembly seats going to Republicans, despite Democrats winning a majority of the votes, was ultimately struck down by the district court and Wisconsin’s appeal to the U.S. Supreme Court was dismissed for lack of standing.

In this context, it’s more important than ever to protect Iowa’s valuable redistricting procedures. Fair apportionment of districts and equal representation is just one component of restoring citizens’ faith in our democratic system.

Iowa has a long way to go in terms of expanding and protecting voting rights and access, but this redistricting process is part of what we’re getting right. We should preserve this process so we can continue to be an example for other states.