The Hawkeyes split the last series against the Wolverines and are looking to keep up the momentum built from Wednesday’s 3-0 win over Maryland. 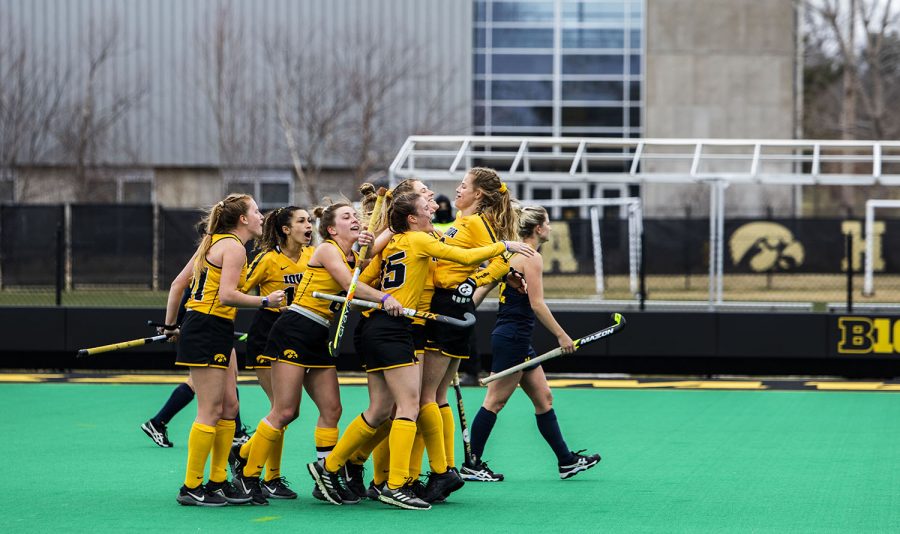 Hawkeyes celebrate their first point during a field hockey game between Iowa and Michigan at Grant Field on Saturday, March 15, 2021. The Hawkeyes defeated the Wolverines, 2-1, in a shootout.

Iowa’s fast start allowed the team to take their foot off the gas for much of the game, and although there is some fatigue, it was an ideal start to the tournament for the Hawkeyes.

“We’re a bit tired,” Iowa head coach Lisa Cellucci said. “But we did not have to press as much, and we knew we had to be more tactical with how we played.”

The two sides split their regular season series. In the first match, Michigan converted one of its few chances against the Hawkeyes to secure the 1-0 win. Iowa outshot Michigan, 13-2, but could not convert any of its chances.

The second time around, Iowa came out on top after winning a penalty corner shootout for the first time under Cellucci.

In both games, Iowa dominated both the possession and the shot counts, but ultimately couldn’t convert as it scored just one goal on the weekend.

After Wednesday’s confident and clinical offensive performance where Iowa put away three of its eight chances, the Hawkeyes are feeling ready to have another go at the Wolverines.

“We’ve been waiting for another crack at Michigan,” Cellucci said. “We thought we played them really well in both games this season, and we ended up splitting, so no better time than now to take another stab at the Wolverines.”

Iowa had 12 penalty corners the first time the two sides met and couldn’t score off any of them. The Hawkeyes are feeling more confident about their ability to tuck those away after converting one of the two they were awarded in Wednesday’s game.

“We had good vibes all day,” freshman forward Alex Wesneski said. “So for us to come in and get the win was a big deal.”

Michigan showed its vulnerabilities in its series against Northwestern, where it lost once and conceded two goals in the other match.

Iowa’s game against Michigan may have major implications regarding the NCAA Tournament. Iowa is currently ranked fourth in the latest National Field Hockey Coaches Association poll, but may need to make the conference finals at the very least to ensure a spot in the field.

That is because this season only 12 teams will take part in the NCAA Tournament. Two teams will receive at-large bids, so if the Hawkeyes don’t win Thursday, it will be an agonizing wait to find out the tournament field.

Ohio State and Northwestern will contest the second semifinal, which will occur after the conclusion of the Iowa-Michigan game.

The Iowa game will start at 4 p.m. at Grant Field and will be televised on BTN.