Many community members have taken to social media, city council meetings, and solidarity displays to support Naa Adjeiwa Tackie, a Black business owner who says she was wrongly evicted from her boutique. 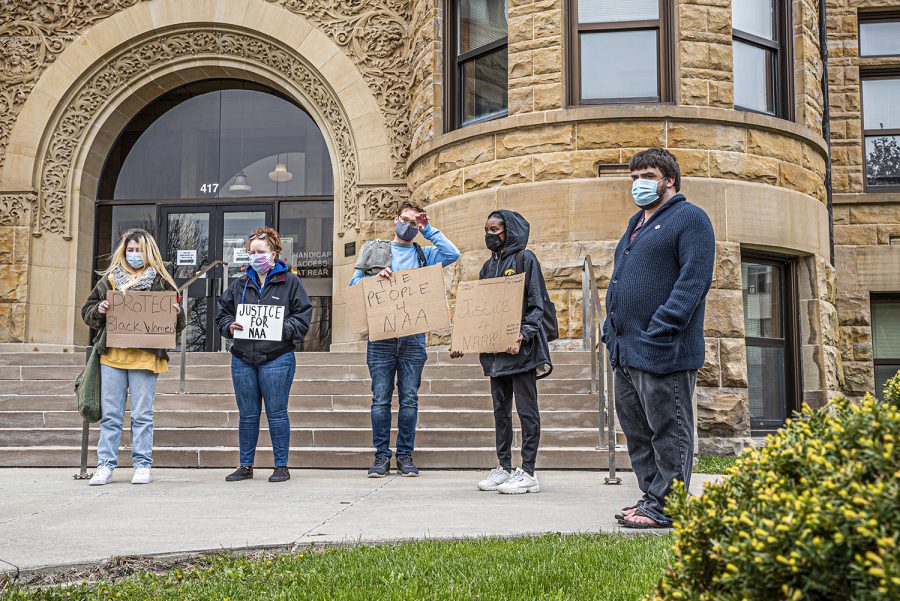 A group of protesters gather outside of the Johnson County Courthouse to advocate for Iowa City resident, Naa Adjeiwa Tackie on Monday, April 19, 2021.

Iowa City small business owner Naa Adjeiwa Tackie, 34, is currently looking to keep her lease and dismiss a motion from her landlord to evict her from her space, accusing him of wrongly evicting her.

According to court documents, a notice of termination of Tackie’s lease was served by her landlord on March 26.

Court documents show Tackie made multiple requests to pay her February rent, but after the second attempt on Jan. 18, according to court documents, she received a message saying that her payment was being refunded because of her lease being terminated.

After attempting to pay her rent and being rejected on multiple occasions, the court document said Tackie was sent an invoice of the cumulative payment she allegedly owed, demanding she pay the outstanding balance on March 3.

This is the second eviction attempt on the property, with the first one being dismissed with prejudice in March.

Tackie’s business, NaNa’s African Boutique and Gift Shop, is located at 5 Sturgis Corner Dr., and the building is owned by Midwest Development and Investment, based out of Fairfield, Iowa.

“I’m facing eviction and unlawful detainer,” Tackie said. “My landlord is trying to get me out of the property, and this is the second case, so the last case was on the first of March, that was dismissed with prejudice, and then he just found another reason to bring me in here. I’m just trying to fight it.”

A case dismissed with prejudice, according to Cornell Law, means the court makes a final determination on the merits of the case, and therefore the plaintiff is forbidden from filing another lawsuit on the same grounds.

In an email to The Daily Iowan, Alan Marks, principal and president of the Midwest Development and Investment Corporation, wrote that the company filed an eviction based upon the tenant not paying rent.

Marks wrote that Midwest Development and Investment Corporation initially sent Tackie an invoice for rent owed for the months of February and March but received no response.

After this lack of response, Marks wrote that the company sent a second legal notice asking for both the February and March rent payments, with the reminder that if left unpaid, the lease would then be terminated, to which the company received no response from the tenant.

“The Tenant failed to respond to the invoice and notice and then subsequently only tried to pay April rent after the lease had been terminated due to the non-payment of February and March rents,” Marks wrote. “MDIC could not legally accept rent once the lease was terminated. This resulted in the eviction steps.”

Marks added that MDIC is currently working on an agreement between the corporation and Tackie, and to dismiss the current eviction proceeding scheduled for Thursday afternoon.

“Despite this costly and time-consuming process for MDIC, MDIC has reached out to the Tenant and is now attempting to reach an agreement on a payment plan for the Tenant to stay in the space and dismiss the eviction proceeding,” Marks wrote. “At no point has MDIC ‘run the Tenant out of business.’”

Immigrating from Ghana almost 20 years ago, and a graduate from the University of Iowa Tippie College of Business, Tackie said she has paved her way as a business owner in Iowa City.

“It’s a business that I’ve been running for the last three, four years for my community because it helps out the African community and minorities in general,” Tackie said.

Tackie had an eviction hearing scheduled for 2:30 p.m. on Monday afternoon to discuss her motion to dismiss the eviction charges. Tackie is represented by Kevin Brown, who practices law with Iowa Legal Aid, a private, not-for-profit law firm that provides free civil legal aid to low-income Iowans, based in Des Moines.

Marks’ representation in this case is attorney Joseph Moreland, who said during Monday’s hearing that his team needed more time to review Tackie’s motion to dismiss. The judge ruling supported this, postponing the hearing until Thursday afternoon at 3:15 p.m.

The DI reached out to Moreland for comment but did not receive a response.

During the Iowa City City Council meeting on Tuesday, community members and Iowa Freedom Riders organizers spoke during public comment regarding Tackie’s eviction hearing, and criticized city council for their alleged lack of assistance to Tackie.

Coralville resident and Iowa Freedom Riders supporter Dan Kauble said he was contacted by Tackie after she said she was unable to effectively reach members of council and city government. He shared her story at the first meeting of the Peoples Truth and Reckoning Commission meeting on April 15.

Coralville resident and IFR supporter Nicholas Theisen, said he believed Tackie’s difficulties in finding legal representation during this process was due to Moreland being a law partner of Bergus’.

“She had an impossible time finding legal representation, despite being willing and capable of paying, because of the political connections of opposing counsel,” Theisen said. “The lawyers just knew it wasn’t worth it for them to take this case on because it had the potential to upset the precious equilibrium, where everyone says they care about social justice, but when push comes to shove, will defend the interests of capitals of landlords, because their livelihoods depend on it.”

Organizers from Iowa Freedom Riders and community members gathered on Monday afternoon outside and within the Johnson County Courthouse to show their support for Tackie, with signs defending her business and protesting against area landlords.

There were also supporters who expressed concerns regarding the connections between Moreland and Iowa City Councilor Laura Bergus.

Moreland is a partner of the law firm Hayek, Moreland, Smith & Bergus, L.L.P., where Bergus is also a law partner.

Bergus said due to her firm’s involvement in this case, there was a conflict of interest on her part where she could not talk about the case or personally assist Tackie.

“I do think there’s just a lack of understanding that it’s a conflict of interest, and what that means to me in terms of my ethical obligations, is that I really can’t be involved on either side,” Bergus said. “It doesn’t mean it’s corruption… conflicts exist and they suck. They really do. That’s why they’re a thing that people talk about. It’s not a great position to be in. It’s not a great position for her to hear her elected official not even say I can’t help you.”

Despite this conflict of interest, Bergus said she contacted several attorneys and sent referrals of qualified attorneys to Mayor Pro Tem Mazahir Salih who was assisting Tackie in her search for legal representation.

“I said, ‘I unfortunately cannot assist, but I would love for her to have a good attorney, so I want to make some referrals,’ and I sent her an email with I think seven or eight names of people at four different firms, and also I reached out individually to a couple of attorneys just saying ‘hey, I’m sending this your way, please consider helping and short turnaround, you know Joe Moreland’s on the other side,’” Bergus said. “That’s how we work in the legal community, I think every lawyer you would ask believes that every person who’s in the legal system, deserves good representation.”

IFR Organizer David Drustrup, who is a fourth-year graduate student at the UI, said at the event on Monday that the group decided to support Tackie after the first meeting of the Peoples Truth and Reckoning Commission.

“We had an African immigrant woman say that she’s being wrongfully evicted, and looking into the case it’s very clear there’s racist and misogynistic implications behind this,” Drustrup said on Monday. “She reached out to the city council, they did not help. They refuse to help and actually some of her requests for assistance are now being used as evidence against her in her case.”

Iowa City Yotopia owner Veronica Tessler said at Monday’s event that there are several small business owners that are in similar situations to Tackie, facing wrongful eviction and conflicts with landlords.

“The same thing that’s happening tonight is happening across the city, including to my business, and it’s just wrong,” Tessler said on Monday. “We’re still in the midst of a pandemic and this is people’s livelihood. This isn’t just like a side project, people rely on this for their livelihood.”

Tessler said she did not want to further expand on her business disputes.

The Centers for Disease Control and Prevention extended the eviction moratorium to protect residents from being evicted based solely on failure to make rent payments. However, Tessler said this does not apply to commercial tenants.

“Small businesses are just suffering just as much as individuals right now,” Tessler said. “We have had no protections at all.”

Tackie said she wants to continue to fight for her business and her space within the building, and to set an example and inspire other small business owners, especially African women who find themselves in similar situations.

“I believe it will just teach other people to be strong and fight because I know there’s other people going through this,” Tackie said. “You never know who it might inspire and encourage to stay, and also just to kind of send a message letting them know that you can’t just keep people this way.”

Editor’s note: This article has been updated to include comments from Iowa City Councilor Laura Bergus.