Sen. Chuck Grassley has maintained for months that he is still deciding whether he will run for an eighth term in the U.S. Senate, while aggressively fundraising. In emails, his campaign is sounding the alarm about Democrats in D.C. and critiquing the state senator who has declared his candidacy. 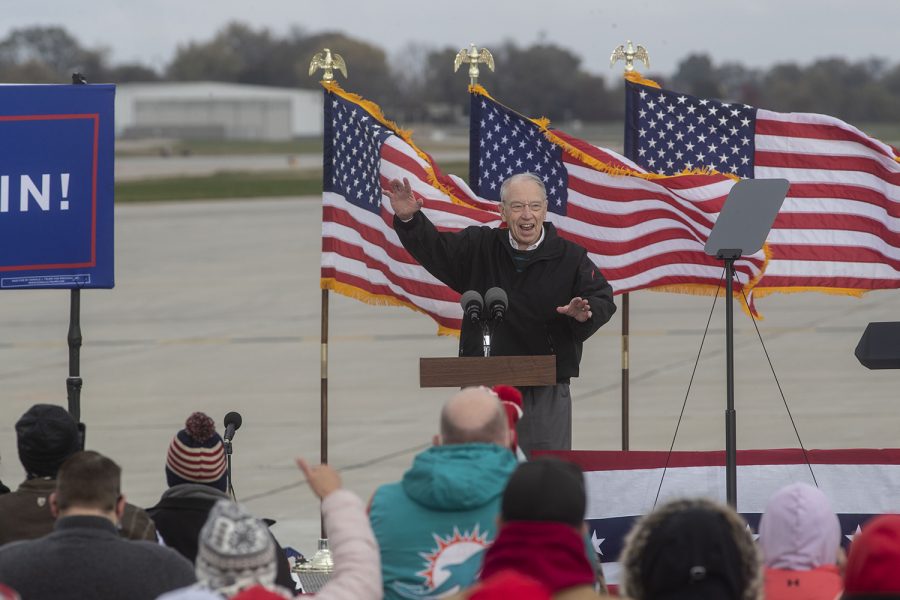 While Sen. Chuck Grassley, R-Iowa, has yet to confirm whether he will run for reelection in 2022, he has not been shy about sending weekly fundraising emails, alerting supporters about “socialism incoming,” “a migrant surge,” and how “Chuck Schumer and D.C. Democrats want to flip this seat BLUE.”

A message sent April 3 detailed a tour to the southern U.S. border, describing children and teenagers held in processing centers at overcapacity facilities, and a briefing on how minors are exploited by drug cartel and human traffickers. At the end of the email from his campaign account, he asks for donations to secure the southern border the U.S. shares with Mexico.

But in calls with reporters, the 30-year senator has been more evasive about whether he wants to launch another bid for a term in the senate to push those policies.

“I’m going to listen to the people of Iowa, listen to my family, and make a decision in October, November, December,” Grassley told reporters on a call on March 10.

The Grassley Committee has continued to push for donations since early this year, sending out weekly emails.

His messages have critiqued the Biden Administration’s plans regarding gun control, and handling of the southern border, claiming that, as a candidate, President Joe Biden, “telegraphed an amnesty message on the campaign trail.”

Grassley has also used the controversy surrounding Rita Hart’s contest of the election in Iowa’s 2nd Congressional District to motivate donations. Hart lost to Rep. Mariannette Miller-Meeks, R-Iowa, by six votes, but her contest said 22 lawful ballots were left out of the state’s election results. Hart withdrew her contest in March, citing the political disinformation around the contest.

Grassley has yet to announce if he’ll run for reelection in 2022, but without launching a formal campaign, Grassley already has filed a statement of candidacy with the FEC and is pushing fundraising goals.

On the morning of Feb. 28, Grassley told his email list his team was short of its end of month goal by $11,345 and asked his supporters to get him back on track with a donation that would be matched 200 percent.

Then, as the first quarterly fundraising FEC deadline approached, Grassley wrote, “This deadline is critical to outraising the Democrats and preventing them from funding any more Socialist candidates. Candidates who are actively working to flood our border, take away your guns, and spend your money to fund projects in Deep-Blue States.”

As previously reported by The Daily Iowan, Grassley is the second longest serving currently seated senator. During the Trump administration, he was president pro tempore from 2019-21. Grassley began in the U.S. Senate in 1981, after serving three terms in the U.S. House. He has represented Iowa in 24 consecutive U.S. Congresses. Before his career in Washington began, Grassley served in the Iowa House of Representatives from 1959-74.

Since his initial election in 1980, Grassley has swept Senate races. In 2016, he beat his Democratic challenger Patty Judge by 376,547 votes, winning reelection by 8 points.

One of Grassley’s fundraising emails painted state Sen. Jim Carlin, R-Sioux City, as an opponent in the 2022 race, despite Grassley’s insistence that he is still considering whether to run.

“I’ve got no comment on anybody who’s running for any office,” Grassley said Feb. 24, when asked about Carlin’s comments. “Everybody’s got the right to run for any office they want to run for as long as they meet the constitutional requirements.”

But the fundraising email sent a different message.

“Even though Senator Grassley has one of the most impressive conservative records in the history of Congress, another Republican has decided to challenge him in the next election. Nothing could be worse for Iowa,” reads an email sent on Feb. 17.

Public opinion on another Grassley term

Kevin Brown, chair of the Republican Party in Clay County, told the DI that, during a small county meeting in March, he spoke to Republicans with varying opinions on Grassley’s action regarding renewable energy and the 2020 election results.

Some of the attendants also disapproved of how Iowa’s congressional delegation responded to the presidential election results, Brown said.

Trump’s legal team claimed wide-spread voter fraud lost him the election, but judges across the country struck down these claims, saying there was no proof of election tampering.

Speaking more generally, Brown said he felt Republicans in his community were satisfied with Grassley’s leadership and his work on the Senate Judiciary Committee, where he served as the chair from 2015-19 and currently serves as ranking member.

Micah Broekemeier, a 29-year-old undergraduate and member of University of Iowa College Republicans, said Grassley represents his values as a conservative, including raising concerns about government spending. Broekemeier said he also appreciated Grassley working in a bipartisan way to lower prescription drug prices.

Broekemeier voted in Nebraska prior to 2020, so the 2022 race would be his first chance to support Grassley if he chooses to run.

“Personally, I don’t think that anybody would have a chance to beat Grassley,” Broekemeier said. “If he were to run again, I don’t think it’d be possible to primary him … I would, as of now, support Grassley, but I do have to do quite a bit of research on the other candidates prior to whatever election takes place here.”

The only concern Broekemeier said he had with Grassley as a candidate was his age.

“I think that he’s been spry, he was constantly working and running even when he had COVID and stuff, so I think he’s a bit of a badass, but with every new election when you’re in your upper 80s, that does raise more questions,” he said.

Age was also a concern for Johnathan Bartholomew, a 19-year-old studying finance at the UI and another member of the College Republicans. Bartholomew said Grassley has done a good job representing Iowa overall, particularly in serving on the Senate Judiciary Committee, but that he wants to see a younger conservative voice in that seat.

When his current Senate term ends, Grassley will be 89 years old. He told reporters in February that if he chooses to pursue an eighth term, he hopes age won’t be a factor for voters.

Grassley also told reporters in March that he wouldn’t be dissuaded from running for reelection based on a poll from the Des Moines Register/Mediacom showing that most Iowans, and one-third of Iowa Republicans, did not want Grassley to pursue another term.

Grassley added that polls are not always accurate representations of how Iowans will vote.

Meanwhile, no Democrats have officially announced a bid for the seat, though Rep. Cindy Axne, D-Iowa, is considering running for Senate, governor, or reelection in the House in 2022.

“Regardless of whether Chuck Grassley runs or not, it’s going to be an extremely vulnerable seat and Iowans clearly aren’t interested in seeing him run for another term,” state Democratic Chairperson and Rep. Ross Wilburn, D-Ames, said, referring to a Des Moines Register/Mediacom poll conducted March 7-10.

Wilburn said he expects the Democrats’ delivery of the American Rescue Plan on the national level will attract Iowans to support a Democratic nominee.

The last Democrat to represent Iowa in the U.S. Senate was Tom Harkin. After representing Iowa for 30 years, he retired in 2015 and was replaced by Sen. Joni Ernst, R-Iowa. Democrat Theresa Greenfield challenged Ernst in 2020 but lost by 6 percentage points.

Axne is the only Democrat in Iowa’s congressional delegation, after the current representative, Republican Ashley Hinson, beat incumbent Democrat Abby Finkenauer, and Miller-Meeks replaced Democrat Dave Loebsack, who did not seek reelection in 2020.