Dealing with infertility as a college student

Dealing with infertility is hard considering the stigma and lack of resources for people my age, but I’ve gotten hope as I’ve lived with it. 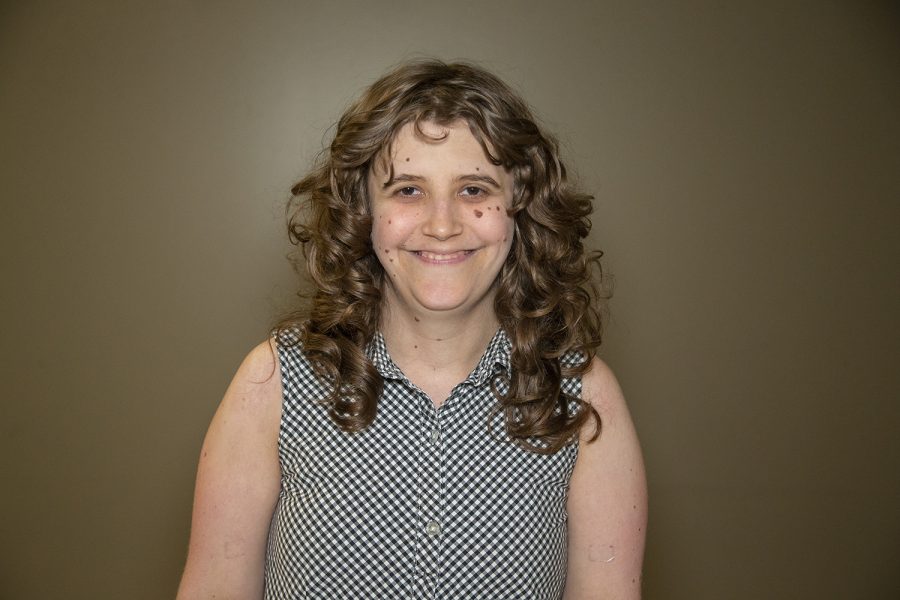 One of my fondest memories from my childhood is babysitting my little sister, who was an infant at the time, while she took a nap and my mom was busy with housework. I loved stroking her hair and hearing her breathing. This made me yearn to have kids of my own someday, only to find out years later I will never be pregnant.

I have Turner syndrome, a genetic disorder resulting from a missing X chromosome which causes infertility. Turner syndrome occurs in 1 in 25,000 births worldwide.

When diagnosed, every grown-up woman I knew told me how lucky I am because I could forego the pain that comes with pregnancy. I don’t feel lucky. Despite being just 22 years old, I’ve thought extensively about my future as a parent.

I want to become a mom the same way all the women I knew did. Growing up, I was embarrassed at the thought that I couldn’t. I felt like a failure — completely overlooking that my worth comes from who I am as a person and not what my body can do. The more I thought about it though, the heavier my funk became.

The inability to have biological kids hurt so much — infertility was what I reacted to the worst when finding out it was a symptom of Turner syndrome. When I was diagnosed at 10 years old with Turner syndrome, I was told both about infertility and the need to take growth hormone shots every night for years until my body stopped growing. After I stopped taking growth hormone shots at age 18, my cardiologist told me I would eventually need open-heart surgery.

My eyes were dry when hearing about open-heart surgery and growth hormone shots, but the waterworks exploded out of me when finding out Turner syndrome meant I can’t have biological kids. The day I was diagnosed with Turner syndrome, I left the hospital red-eyed and full of emotions not because I would need to take a growth hormone shot in less than 48 hours, but because I would never be able to produce a child, something which did not affect me immediately at 10 years old.

Considering everything else Turner syndrome has put me though, infertility should be the least of my worries.

Whenever I think of dating, I imagine it not working out because my prospective partner might want to have biological kids. I’ve never been in a relationship before, but I have still thought about the dilemma that comes with being someone who can’t have biological kids while dating.

When do you tell someone whom you are in a relationship with about your infertility?  On one hand, I don’t want to freak out my hypothetical future boyfriend because I am thinking too far ahead into the future. On the other hand, I also don’t want him to be mad at me if I hide it for too long.

I assume my dating life is dead upon arrival before it has even begun because of infertility, and I overlook that I know others with Turner syndrome who are happily married. Plus, if someone is willing to end a relationship with me because I can’t have biological kids, doesn’t that say more about them than me?

My mom said her grandma would always tell her to not waste her tears because then when something worth crying over happens, there won’t be any left. I have already wasted so many tears over something which, so far, has not caused any actual problems. I’m done wasting my tears.

“One of the issues with infertility is the stigma. It’s not something that people talk about,” Pawlak said. “People often do not realize their friend, neighbor, or someone else they know might have it.”

The media also doesn’t help by portraying infertility in a way which adds to the stigma. In the Nicholas Sparks book, The Longest Ride, the main character can’t have biological kids and uses that as a reason to break up with the woman he loves.

The couple does eventually get married, but the woman has spells of anger and depression because of it. To someone who is afraid about being dumped for the inability to have biological children, the portrayal of infertility as something ruining even true love did nothing but unleash preexisting depression and anxiety within me.

Because my friends never talk about infertility and the sense of taboo around the subject, feelings of loneliness would overwhelm me because I felt nobody my age could understand what I was going through. If more people talked about it, there would be less stigma around it because we would realize just how many people actually can’t have biological kids.

Nearly 6.1 million women in the U.S. between the ages of 15-44 have difficulty getting or staying pregnant. Globally, between 48 million couples and 183 million individuals live with infertility. Male infertility occurs in 30 percent of infertility cases.

Yet, we don’t realize how common it is because we don’t want to talk about it. This causes so many people to needlessly deal with shame and devastation. 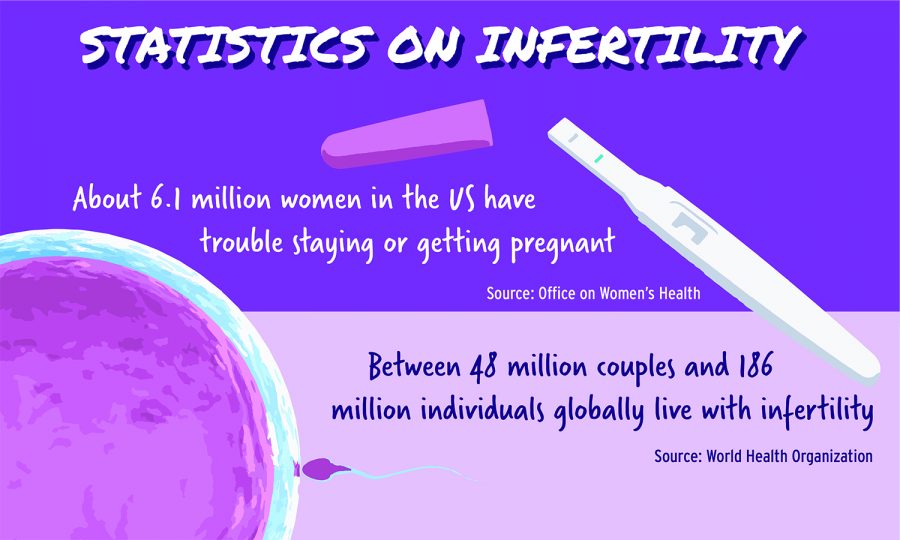 Pawlak said college students should have access to the same resources as older women who are infertile.

“The stress that comes with infertility is not specific to age,” Pawlak said.

I would love it if the UI or Iowa City provided support groups for college students who can’t have kids biologically where we can talk about our feelings with others going through the same situation.

Pawlak said another thing the UI could do is have its Student Wellness center talk about infertility, what causes it, and what services there are for it.

Jessica Kresowik, reproductive endocrinologist at UI Hospital and Clinics, said UIHC provides In Vitro Fertilization (IVF) and information about adoption for patients who are infertile.

IVF is a procedure in which eggs are taken from the ovaries and fertilized by sperm in a lab.  Then, they are transferred back to the uterus with the hopes of the women whose uterus it is being implemented into getting pregnant. This procedure typically takes three weeks, but — sometimes — the steps are split and it takes longer.

Common causes of infertility are problems with ovulation, sperm, uterus, and the fallopian tube, Kresowik said. She said her clients often get asked insensitive questions, such as why they have not had a baby yet. To prevent these types of questions, society needs to be more aware of infertility.

Kristin Ramseyer, a UI graduate student working toward a doctorate of musical arts in choral conducting, said she was diagnosed with infertility in November 2020 after she and her husband spent a year trying to get pregnant following a miscarriage. She said the doctors don’t know what caused it.

“At the time, I was just very depressed, and it was debilitating,” Ramseyer said.

Ramseyer said she went to a private counselor in Iowa City and that talking about infertility with someone who has an outside perspective helped. She said she and her husband are friends with a couple going through IVF and know others who conceived with IVF.

“It’s been encouraging to know I’m not the only person who struggles with this,” Ramseyer said. “There’s something to be said for the stories of people who are still fighting to build a family.”

Ramseyer said people should not project their own feelings about pregnancy, infertility, and other reproduction issues onto others.

“The most important thing that I’ve learned is to expect the unexpected,” Ramseyer said. “Don’t expect that a woman should feel a certain way about having a baby or losing a baby.”

Ramseyer said she and her husband hope to have kids but haven’t decided between adoption and IVF.

Personally, my doctors don’t recommend me carrying a pregnancy because of my congenital heart defect. I have an enlarged aortic valve and pregnancy will be too much of a strain on my heart.

I must adopt, and while part of me still longs for a biological child of my own, I also realize there are many kids in orphanages longing for and deserving a loving home. According to the United Nations International Children’s Emergency Fund (UNICEF), there are about 140 million orphans globally.

My inability to become pregnant is my ability to create a home for a child who otherwise might have never known motherly love. Maybe I will make a child’s dream come true because of a condition I cried over for hours.

I hope my story inspires others to share theirs. We need this conversation to continue to decrease the stigma around infertility and realize it does not prevent someone from being a person worthy of love.

I can still love a child unconditionally. I can still provide as warm and nurturing an environment as anyone who has biological kids. I may never feel a baby kicking in my stomach, but I know someday I will feel the motherly love for a child.