In a public forum on Monday, Provost and Senior Vice President for Academic Affairs at Georgia State University Wendy Hensel emphasized the importance of holding a university’s administration accountable and keeping higher education accessible for all students. 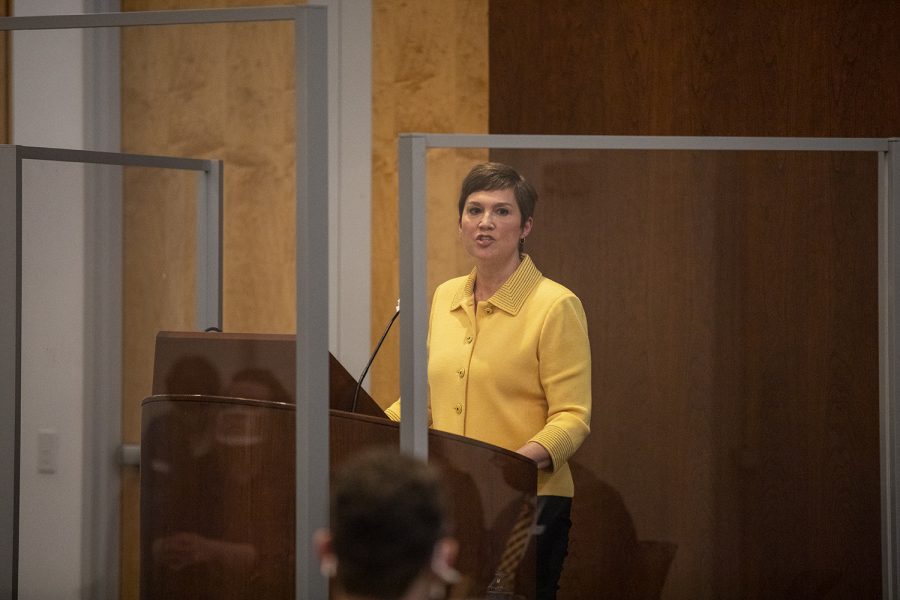 The third finalist for the University of Iowa’s presidency, Wendy Hensel, characterizes her roles in the past as being a “complex problem solver, change agent, and educator.”

Hensel is the provost and senior vice president for academic affairs at Georgia State University. She worked at the university for more than two decades before beginning her current position in October 2019.

She said she plans to support financial and academic accessibility for students, build relationships with the Iowa City community through conversation, and take action in all diversity, equity, and inclusion efforts instead of just talking about changes.

With a background in labor and discrimination law, Hensel said she believes it’s important to focus on making sure students with disabilities have access to resources they can use to be successful.

She added that professors need to recognize the needs of students with disabilities within the classroom, and the UI also needs to provide accommodations to faculty and staff who require them to do their jobs.

“That’s a foundational component to equity and diversity, and something I take very seriously,” Hensel said.

Hensel also emphasized the importance of focusing on student success through erasing barriers for students from lower socioeconomic backgrounds or with parents who aren’t involved with their education.

“We can eliminate all barriers to student success if we look at ourselves, rather than at students and ask what barriers we have intentionally or rather unintentionally erected that keep them from success,” Hensel said.

“To have there be actually no gap at Georgia State right now between white students and students of color, students of the LGBTQ community, first gen students, and low income students, is impressive,” Smock said. “We have a large gap in that area and we’re doing a lot to fix it, but it’s really difficult.”

Hensel said as the president of the UI, she would work to raise the UI’s graduation rates and to close the gaps in the graduation rate between students of color and white peers. According to a fall 2020 state Board of Regents report, 72 percent of UI students in the 2014 cohort graduated in six years, and 55 percent of students in the 2016 cohort graduated in four. Although the report doesn’t separate the three public institutions, underrepresented groups across Iowa’s public universities graduate at a rate 9-12 percentage points less than white students, according to the report.

“That’s a critically important thing that needs to happen,” Hensel said “I think working together, we have a really good shot of making that happen.”

As previously reported by The Daily Iowan, the UI saw an improvement in graduation retention for the 2020-21 academic year.

Hensel said through providing more assistance in answering financial questions for students and helping them navigate course loads, graduation rates can improve and the time students spend earning a degree will decrease.

She said Georgia State has started using artificial intelligence systems such as chatbots to help answer questions students might have at any time of the day between the time when students commit to the university and start classes in the fall.

“Students don’t necessarily like to reach out and ask these questions,” Hensel said. “They want the information brought to them, and using a system of nudges and guidances through the use of electronic artificial intelligence programs that we have, that can seriously save a lot of money by reducing the time period.”

This also eliminates any embarrassment students may have about the question they’re asking. If the chatbot can’t answer, the system notifies an advisor to reach out to the student the next day to better address the question, she added.

The support from using chatbots and other AI technology would focus on retaining students, increasing graduation rates, and working with students to finish their degree in less time, saving them money in the long-run, Hensel said.

She said the use of chatbots and other technology gives students more guidance and prevents them from wasting time taking courses that don’t count toward completing their degree.

Hensel said the UI should be committed to keeping tuition costs as low as possible, as well, so students aren’t facing debt that will affect the rest of their lives. She added that the UI should be working with donors to increase scholarships and other types of financial support, pushing costs down for students.

During the forum, Hensel emphasized the importance of taking action and having conversations with campus stakeholders about diversity, equity, and inclusion.

She said it’s important to have these conversations before action is taken and speak to people with differing opinions to work toward a solution.

When asked about hiring diverse administrators and faculty at the UI, Hensel said oftentimes, a goal to see numerical progress of diversity on campus and to hold the administration accountable is not set.

She said one of her first duties in her position as provost at Georgia State was to hire a diverse cabinet.

“When I took the position of provost, I didn’t wait for an opening,” Hensel said. “I created that position. I would expect that as part of a diversity initiative that we would develop those accountability measures together, that we would discuss it routinely, that we would measure what we care about.”

Hensel said she believes searches to fill administration vacancies need to be open and transparent to build trust in the process and between administrators, students, faculty, and staff.

While serving as provost, Hensel said she offered an interim dean the position on a permanent basis, citing stability the administrator could bring amid challenges brought on by the pandemic as her reasoning for the appointment.

“The concept created some mistrust because the process wasn’t followed, even though it was a legitimate offer of choice on the part of the faculty,” she said. “It turned out, in my mind, to be something of an unforced error because it created the impression among some that their voice was not being heard and that the full process was not being respected.”

Two top administrators at the UI, Provost Kevin Kregel and Executive Officer for Diversity, Equity, and Inclusion Liz Tovar, were permanently appointed from interim. Current UI President Bruce Harreld said at the time their extensive service in the roles meant a search was not needed.

When asked about mistakes that Hensel has made in the past, she said she has learned that the process is important, and it is easy to make a mistake by not including people in the conversation.

At Georgia State, Hensel said she made a mistake by not consulting others when creating the presidential Office of Diversity, Equity and Inclusion to provide accountability at the presidential level.

“Fortunately, that involved two hours of a very painful conversation of saying ‘I’m sorry, that was wrong, and I understand why you feel upset about this.’ The only failure here is if we fail to keep doing the really important work together, understanding that the intentions are in the right place, even if sometimes the actions didn’t reflect those intentions,” she said.

Hensel added that Georgia State is now in the process of developing the presidential DEI office.

Smock said as a UI student, she thinks it is important for administrators to be able to recognize their mistakes and try to create transparency and build trust with students and faculty.

“I felt that every candidate was very willing to talk to students and always have students as a priority, which obviously is my priority when looking for a candidate,” Smock said.

When asked about police reform, Hensel said she would not defund or reallocate funds away from the UI Police Department, but she said she supports a holistic approach to safety, which is one of three models being presented to Harreld to change the UI’s approach to campus safety.

Selection of a plan is set for sometime this spring, with the university potentially implementing those changes over the summer. Harreld’s last day is May 16, and current co-chair of the search committee, John Keller will fill in the gap as interim president before the new person starts.

“I don’t think the defunding is the answer in the sense that we need to fund anything that helps us meet the needs of our students,” Hensel said. “There’s certainly mental health issues, social workers clearly can be a better source of that, and you can be part of the solution, but we also need the police to help us.”

UI senior Taylor Kohn shared her thoughts via Twitter about Hensel after watching the forum virtually. Kohn wrote in a message to the DI that she disagrees with Hensel’s claim that the UI needs police.

“Last summer alone, UIPD tear gassed protesters on June 3rd and targeted and arrested members of our community,” Kohn wrote. “Having cops on campus doesn’t make Iowa City or the university safer. The funds that go to UIPD are our tuition dollars actively being used to endanger us.”

However, Kohn wrote that the fact that Hensel supports the holistic model was encouraging.

“I consider the Holistic Model a good starting point for addressing policing on campus and investing in other programs and resources that would actually protect and support students,” Kohn wrote.

The regents are slated to pick the next UI president on April 30. Campus can submit feedback on the candidates until April 26 at 5 p.m. via an online form. The final candidate will be announced Wednesday at 8 a.m., with a public forum Thursday at 3:30 p.m.

Smock said compared to all the candidates so far, she is the most impressed with the second finalist, Barbara Wilson, who is the executive vice president and vice president for academic affairs for the University of Illinois System, because of her work experience.

“I think all three candidates have brought such strong values of diversity, equity and inclusion and academics and the things that students I think are asking for the most,” she said.