This week, the University of Iowa will host the Big Ten Field Hockey Tournament for the first time since 2012. 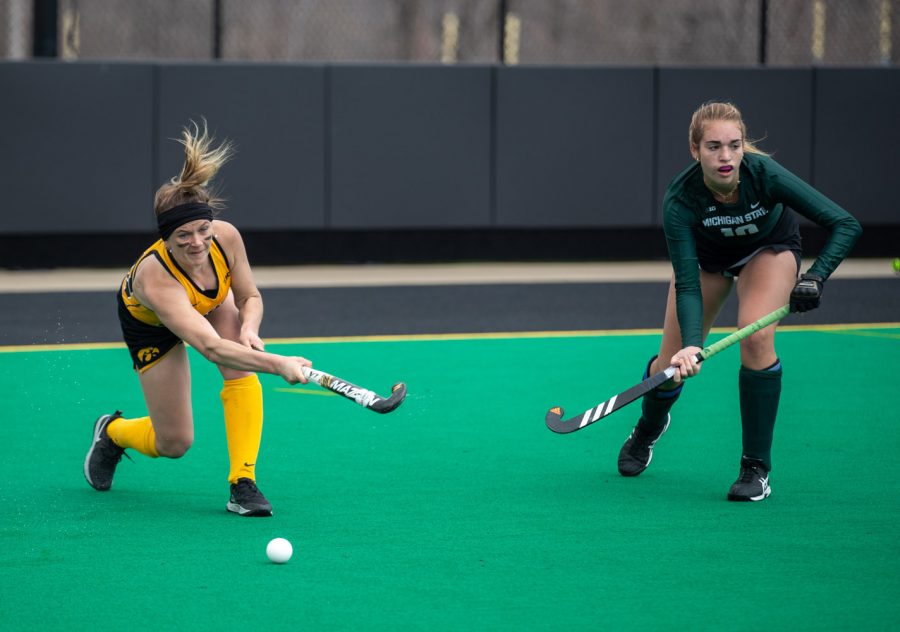 Iowa Forward Maddy Murphy sends the ball upfield during a field hockey game between Iowa and Michigan State at Grant Field on Friday, March 28, 2021. The Hawkeyes defeated the Spartans 2-0.

For the first time since 2012, the University of Iowa will host the Big Ten Field Hockey Tournament. Counting this year, the Hawkeyes have hosted the event five times since its inception in 1981.

“We have a comfort there, and it is awesome to be able to come into your home venue and the team is really excited to be the host,” Hawkeye head coach Lisa Cellucci said.

During the 2012 Big Ten Tournament in Iowa City, the then-fourth-seeded Hawkeyes won their first-round matchup against Michigan State, 2-1, and proceeded to lose to Penn State, 3-2, in the second round.

Since then, Maryland and Rutgers have joined the Big Ten Conference, adding two teams to the 2020-21 Big Ten Tournament field that did not compete the last time the event was held in Iowa City.

“Within the top six teams, there has not been a single game that has been a blowout,” Cellucci said. “We’re all going to be battling and it’s going to be some intense field hockey.”

Michigan enters the tournament as the top seed, finishing the regular season with 10-2 overall and 6-0 conference records.

“There’s so many ranked teams in the Big Ten,” senior Maddy Murphy said. “It’s going to come down to which teams can perform under the high pressure.”

The Hawkeyes are seeded fifth in the year’s Big Ten Tournament. So, Iowa will take on Maryland in its tournament-opener Wednesday at 1:30 p.m.

The Hawkeyes and Terrapins split their two regular season matchups in 2020-21. Maryland claimed the first match that counted toward the Big Ten standings, while the Hawkeyes won the second game that was accounted for in the national rankings.

Fans will be allowed to attend the 2020-21 Big Ten Tournament at 50 percent capacity at Grant Field in Iowa City. The attendance limit complies with the current Iowa Athletics protocol that was put in place in March.

Michigan State and Indiana will kick the tournament off on Tuesday at 1 p.m. First-round action will follow on Wednesday.

The tournament’s semifinals will be played Thursday, with the conference championship game to follow on Saturday at noon.

All 2020-21 Big Ten Tournament games will air live on the Big Ten Network.