The freshman hit the big home run in the first inning. 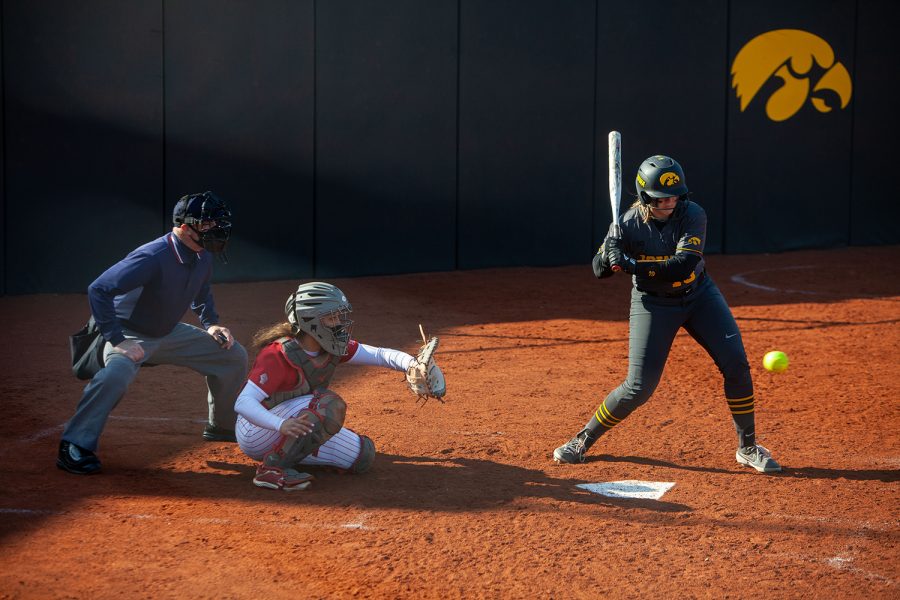 Iowa utility player Lindy Milkowski watches the ball at bat during a softball game between Iowa and Indiana at Bob Pearl Softball Field on Friday, April 2. After nine innings of play, the Hoosiers defeated the Hawkeyes 4-1.

Iowa softball had failed to get a home run in the first three games of its series against Northwestern, but the Hawkeyes got one in the fourth game that proved big.

Freshman designated player Lindy Milkowski hit a grand slam in the bottom of the first inning to left field to give the Hawkeyes the boost they needed to win, 5-2, at Pearl Field Sunday

“It felt so amazing,” Milkowski said. “… I was screaming the whole way around the bases. I was just super excited. It’s the best feeling when you hit a home run, especially when there’s bases loaded.”

Though freshman center fielder Brylee Klosterman struck out to begin the inning, the Hawkeyes got two consecutive singles from junior left fielder Riley Sheehy and freshman Denali Loecker against Northwestern’s Lauren Dvorak. Those singles were followed with a walk from freshman catcher Marissa Peek.

A home run wasn’t what Milkowski had in mind when she first stepped up to the plate as the No. 5 hitter.

“Just trying to hit a single or trying to score a run,” Milkowski said. “There’s are lot of ways to score runs when bases are loaded. You could squeeze the ball. You can also hit a sac fly which I’m really at. But just trying to find a hole, and she just gave me the perfect pitch, and I just saw a good pitch and I hit it.”

Previously, Milkowski had been batting higher up in the lineup, as she had batted in the No. 3 spot in Saturday’s doubleheader. Though she got one RBI and two hits on that day, head coach Renee Gillispie wanted to make a change.

“She asked why she wasn’t catching, and I said, ‘It’s not about the catching right now, it’s about you going to the five spot, we’re going to need some power in that five spot,’” Gillispie said. “I think she took it to heart. She was just ready. She lives for that moment to have bases loaded.”

RELATED: Iowa softball’s bats recover a day after being no-hit

By giving the Hawkeyes a 4-0 lead, Milkowski provided an early boost to the Iowa bench.

“That got us all super hyped,” senior pitcher Lauren Shaw said. “That was awesome for a freshman to step up and get that grand slam. That thing, I think it’s still in the air. It was awesome. It kept our energy going, kept the momentum, started the first inning hard, and we carried that throughout the whole game.”

Gillispie said the team’s number one thing for the game was about momentum. Any time the Hawkeyes saw the momentum shifting, they took it right back.

The Hawkeyes other run of the day came in the third inning when freshman third baseman Sammy Diaz hit a single to right field to score sophomore right fielder Nia Carter. The hit gave Diaz her first RBI of her career.

“For her it was just having the confidence at the plate again,” Gillispie said. “She was seeing a lot of balls. The zone was a little bit wide today. We really had to work on being able to be tight at the plate, and Sam if you watch her, her toes are on the line, and she’s ready to find a pitch that she can drive. So she did a great job of making the adjustment and getting that chance for the RBI.”

After failing to get any runners on base Friday, the Hawkeyes finished the series with 27 hits. All nine batters reached base safely Sunday, and Denali Loecker went 7-for-13 on the weekend.

Milkowski explained the team’s shift in its hitting approach throughout the weekend.