The Hawkeyes recorded numerous career-bests at both meets. 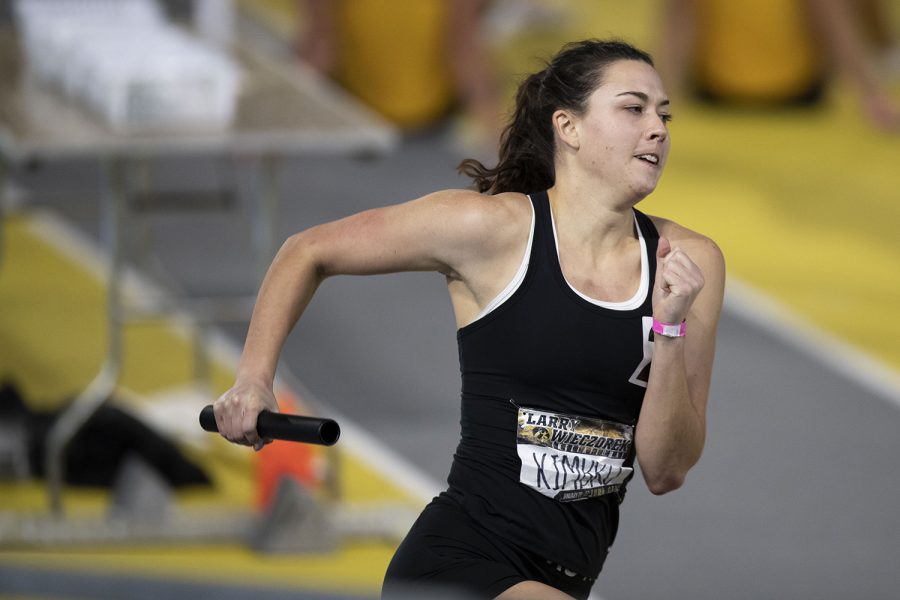 Iowa multi events competitor Jenny Kimbro runs unattached in the 4x400m relay during the second day of the Larry Wieczorek Invitational on Saturday, Jan. 23, 2021 at the University of Iowa Recreation Building. Due to coronavirus restrictions, the Hawkeyes could only host Big Ten teams. Iowa men took first, scoring 189, and women finished third with 104 among Minnesota, Wisconsin, Nebraska, and Illinois.

The Iowa track and field team had all eight of its athletes set personal records and record four all-time top 10 performances in school history at the Indiana Big Ten Invite No. 3 Friday.

In Indiana, Kal Lewis earned the bronze medal in the 1,500 meters with a time of 3:43.42, beating his previous personal record by six seconds. His career-best time puts him second all-time in program history, a half-second short of the record holder, Jeff Thode, who recorded a time of 3:43.02 in 2010.

Emma Gordon had a career-best time of 17:07.07 in the 5,000 meters, giving her 16th place and doing better by over a minute than her previous best time. Nathan Mylenek finished seventh with a career best of 13:54.15, a time 15 seconds ahead of his previous personal record and currently second all-time in program history.

In the 10,000 meters, a career-best time of 28:48.18 gave Daniel Soto the silver medal. Soto’s time is second all-time in school history and is four seconds behind Stetson Steele’s mark set in 2000. Noah Healy finished fifth with a time of 29:56.30, giving him ninth best time in program history.

“This was an incredible night for the distance crew,” Iowa assistant track and field coach Randy Hasenbank said in a release. “We had a lot on the line and poured all our chips into this meet and the squad just competed so well.”

Paige Magee placed runner-up in the 100 hurdles, running 13.57 in the finals and recording the sixth best time in school history in her outdoor season debut. Myreanna Bebe also set a personal-best, placing seventh in 13.80.

Jamal Britt finished the 400 hurdles with a time of 51.55, giving him the silver medal. Austin Lietz finished right behind Britt with a career-best time of 52.23.

In the men’s long jump, James Carter earned the bronze medal with a jump of 7.43 meters.

On Saturday, Jenny Kimbro got the gold medal in the heptathlon after starting the day in first place. She finished strong in the final three events, which included a career-best in javelin with a mark of 35.53 meters.

“Jenny Kimbro led the way for the women in the Heptathlon,” Iowa director of track and field Joey Woody said in a release. “She had a huge PR in the Javelin and went for it in the 800 to win the event and set her up for a big score in her first Heptathlon in two years. I can’t wait to see the progression of our entire multi group over the next four weeks as they prepare for the Big 10 Championships.”

Peyton Haack finished with a career best score of 7,300 points, a total that ranks fourth all-time in program history. That point total gave him seventh place.

“I thought Tysen competed very well by fighting all the way to the finish line in the men’s 800 to finish runner-up and continue to prove he’s one of the best Mid-distance athletes in the conference,” Woody said.

The Hawkeyes will to Champaign, Illinois, next to compete in the Big Ten Preview from April 23-24.