The men’s team took down Wisconsin Friday, and the women’s team capped off its historic season with a win against No. 44 Nebraska Sunday. 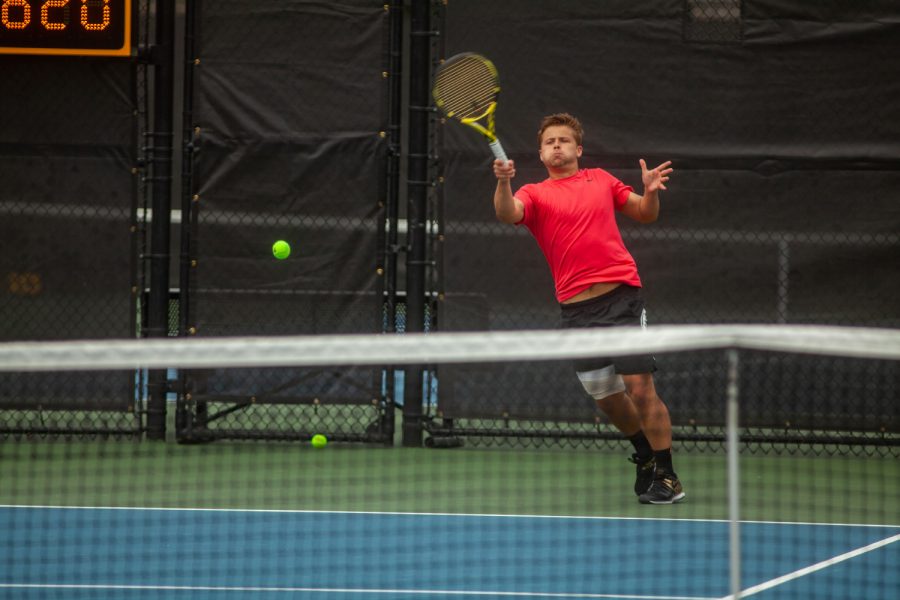 Iowa’s Will Davies hits the ball during a men’s tennis meet between Iowa and No. 14 Illinois on Friday, April 9, 2021 at the Hawkeye Tennis and Recreation Complex. The Fighting Illini defeated the Hawkeyes 5-2.

After eight matches, the Iowa men’s tennis team finally managed to snap its losing streak with the 4-3 win over Wisconsin Friday.

The Hawkeyes completed the season sweep against the Badgers with singles victories from Iowa’s top four players.

The match was back and forth throughout. After losing the doubles point to open up the match, junior Joe Tyler responded for Iowa with a quick 6-4, 6-2 victory on court three.

From there on out, every time the Hawkeyes grabbed a win on one of the singles courts, the Badgers responded right back with a win of their own.

With the score tied at three, junior Will Davies found himself in a familiar spot with the match on the line. The Norwich, England, native rallied after losing the first set to come back and clinch the dual match victory for Iowa with the 18th three-set win of his career.

Along with his singles win, Davies tied former Hawkeye Will Vasos as the program’s leader in career doubles wins with a 6-3 victory Friday.

Iowa head men’s tennis coach Ross Wilson decided to split up the No. 2 pair in the nation of Davies and Oliver Okonkwo on Friday, electing instead to pair Davies with senior Kareem Allaf and Okonkwo with Tyler.

The move didn’t work out in fixing Iowa’s doubles struggles, as the Hawkeyes have now lost the point in 10 of their 17 matches this year.

The men’s season finale against No. 49 Minnesota that was scheduled for Sunday was postponed out of an abundance of caution.

It is unknown whether the decision was made because of a positive COVID-19 case in the Iowa program or the Minnesota program, but the two institutions are currently working with the Big Ten to identify rescheduling options.

The women’s team completed the Iowa tennis sweep this weekend with a dominant performance against No. 44 Nebraska.

“It was another great day, and a tough battle on the road against a quality Big Ten team,” Iowa head women’s tennis coach Sasha Schmid said in a release Sunday. “We have a ton of respect for Nebraska and the last time we played it was a battle, and it was no different today.”

Iowa has now won six straight matches, and the Hawkeyes will head into the postseason with their top three players red hot.

With the first regular season of her career now under her belt, Noel will head into postseason play having put up a 22-0 record in singles and 13-6 in doubles.

Her doubles partner, junior Samantha Mannix, has won five of her last six matches. No. 86 Elise van Heuvelen Treadwell will finish the final regular season of her career with an 18-3 record after beating Isa Adrover Gallego, 6-3, 6-1.

Sunday’s match was full of drama right out of the gate with doubles coming down to the wire.

After each team picked up a doubles court, it came down to a nail-biter on court one, with Noel and Mannix just managing to edge out Maja Makoric/Kristina Novak, 7-6.

“I was proud of doubles and to have No. 2 doubles fight back and win that close match,” Schmid said. “Then No. 1 doubles kept plugging away and kept competing and got the tie breaker, which was great momentum.”

From there Iowa’s big three took over, and Nebraska’s lone point came from a 7-5, 6-0 victory from Chloe Kuckelman over Iowa’s Michelle Bacalla.

The Big Ten Tournament for the women’s team is April 29-May 2 in Madison, Wisconsin.