The regular season comes to a close this weekend for both Iowa men’s and women’s tennis. 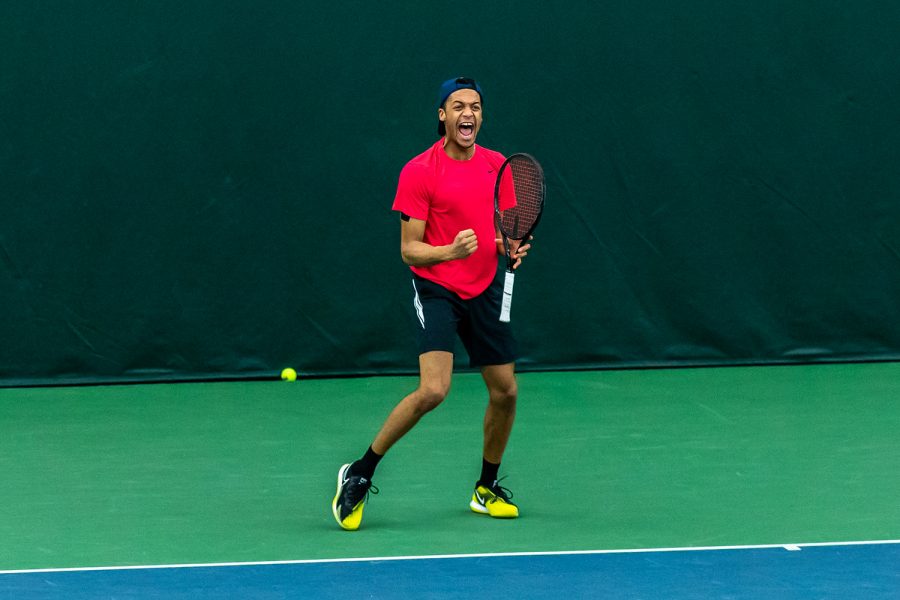 Iowa’s Oliver Okonkwo celebrates a point during the Iowa Men’s Tennis match against Minnesota on Mar. 14, 2021 at the Hawkeye Tennis and Recreation Complex. Minnesota defeated Iowa 4-3.

This weekend, both Iowa men’s and women’s tennis will return to the court to wrap up the 2020-21 regular season.

The Hawkeye women will travel to Lincoln to take on Nebraska Sunday, while the Iowa men journey to Madison and Minneapolis to take on Wisconsin and Minnesota, respectively.

On Wednesday, junior Will Davies and sophomore Oliver Okonkwo made Iowa men’s tennis history, earning a program-record No. 2 national ranking in doubles.

“A great accomplishment for Will and Oliver,” Iowa men’s tennis head coach Ross Wilson said in a Wednesday release. “They set out to play in the NCAA Tournament and become Iowa’s first-ever All-Americans. They are one step closer to accomplishing that goal.”

Davies and Okonkwo are 10-2 as a pair this season. Against ranked opponents, the doubles duo has gone 4-1.

The Englishmen picked up two of those wins over ranked foes last weekend against Northwestern’s No. 7 national pairing of Simen Bratholm and Nick Brookes, and Illinois’ No. 14 duo of Zeke Clark and Alex Brown.

Despite the success of their top pair, the Hawkeyes have struggled in doubles of late. Iowa has dropped the doubles point in five of its last six matches, dating back to March 21.

“We have a lot of guys that can play good doubles,” Wilson said. “We are just trying to find a combination that works where we can get two of the three matches.”

Like Okonkwo and Davies, Iowa women’s tennis freshman Alex Noel has also found a great deal of success this season, etching her name into the Hawkeye record books Tuesday with her program-high third Big Ten Women’s Tennis Athlete of the Week honor.

RELATED: The regular season comes to a close this weekend for both Iowa men’s and women’s tennis

On the season, Noel is 21-0, boasting the best single-season win percentage of any women’s tennis player to ever compete at Iowa.

Noel is joined in the ITA individual rankings by Hawkeye senior Elise van Heuvelen Treadwell, who checks in at No. 86 in the rankings.

As a team, the Hawkeyes have won five-straight contests, dating back to their March 19 win over No. 49 Wisconsin. Despite that, the Hawkeyes’ ITA team ranking has dropped every week since March 24.

Iowa is currently ranked 43rd in the nation, down from its season-best No. 37 ranking.

“We are looking forward to getting home and getting ready for our final conference match of the year at Nebraska on Sunday,” Hawkeye head coach Sasha Schmid said in a release.

Both tournaments begin on April 29 and end May 2.

The Hawkeye men will likely need to win the 2021 Big Ten Championships to qualify for the 2021 NCAA Championships, as Iowa’s record is currently 4-12.