Controlled burns were recently conducted by Iowa City Parks and Recreation. These burns in three separate parks were meant to kill off invasive species, promote biodiversity, and to prepare land for new plots of prairie. 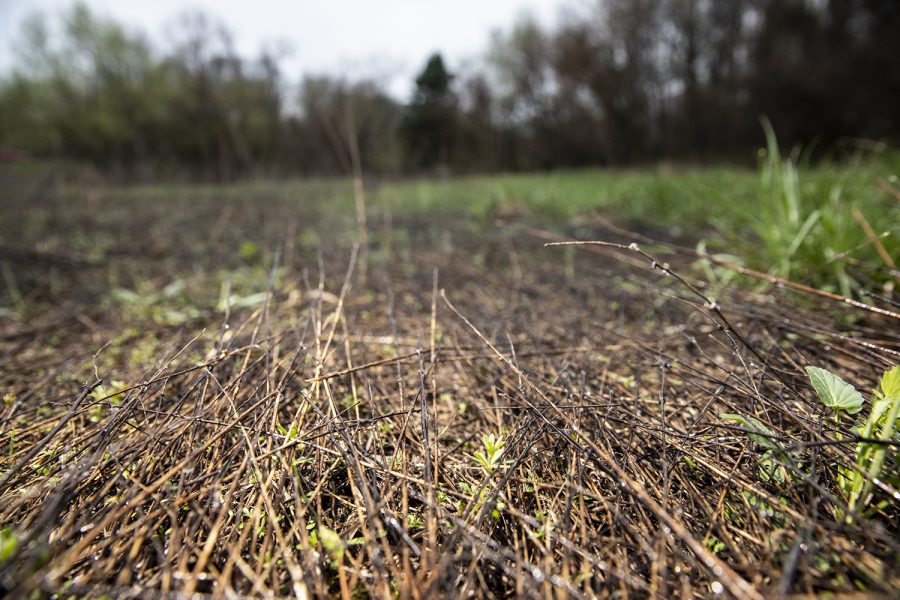 Areas where prescribed burns have taken place are seen at Hickory Hill Park on Friday, April 9, 2021. Prescribed burns are conducted to promote the health of an ecosystem, dampening the effect of invasive species while allowing native species a better habitat to grow in.

The Iowa City Parks and Recreation Department recently conducted prescribed fires at three Iowa City parks in an effort to protect the prairies that were there from invasive species, as well as to prepare the land for new plots of prairie.

“Prescribed fire reintroduces a natural cycle or natural disturbance to the prairie. These prairie plant communities evolved with fire as part of their cycle and their process, so fire has potential to impact these prairie plant communities in a positive way,” Schmidt said. “I think at the higher level that, prescribed fire or fire in general encourages native plant diversity, we’re trying to encourage native plant growth, diversity, vitality, and longevity.”

Schmidt said prior to the arrival of European colonizers on the prairies, some fires occurred naturally, and other controlled burns were used by Native American tribes.

“We think that it didn’t happen naturally, you know, maybe lightning strikes and things like that started fires naturally,” he said. “But we also know that Native Americans that live here in Iowa utilized fire as well for the benefit of themselves and the animal life around them.”

Josh Worrell, assistant superintendent of parks and forestry with the Iowa City Parks and Recreation Department, said these three parks had controlled burns conducted on them for different reasons.

Worrell said the burn at Terry Trueblood Recreation Area was to control cool season grasses, the burn at Kickers Park was for a new establishment of prairie land, and the burn at Waterworks Prairie was for rejuvenation and to control some autumn olive that was growing in the area.

Worrell said there was another burn that happened at Hickory Hill park, but the parks department contracts that out to separate companies or groups.

Worrell said while these prescribed fires have the potential to be dangerous or to get out of hand, they are very planned and there are preventative measures in place to make sure that the fires do what they are supposed to.

“There is a potential risk factor that goes along with them. We have a burn permit that we write out and turn in to the fire department that they sign off on,” Worrell said. “Then, we write what is called a prescription. We write it out, so we know exactly which way we want the wind to be, we know exactly the temperature range, the relative humidity range, and there is a prescription that we follow to help minimize any risk of a fire getting out of hand.”

Steve Woodruff, a biologist for the Iowa River wildlife unit of the Iowa Department of Natural Resources, said that it is important to restore and protect these prairies, as there is a very small amount of natural prairie left in the state.

“The wildlife areas, true natural prairies that are left, last I heard, was one-tenth of 1 percent of the natural prairie left in the state,” Woodruff said. “It depends on soil types and seed species that you plant, but we do try to restore as much prairie as we can in the suitable conditions.”