Hawkeye Marching Band selects next drum major, a woman in a position dominated historically by men

University of Iowa senior Amanda Thomas will serve as the band’s next leading Hawkeye, one of just a handful of women to do so in the band’s 140-year history. 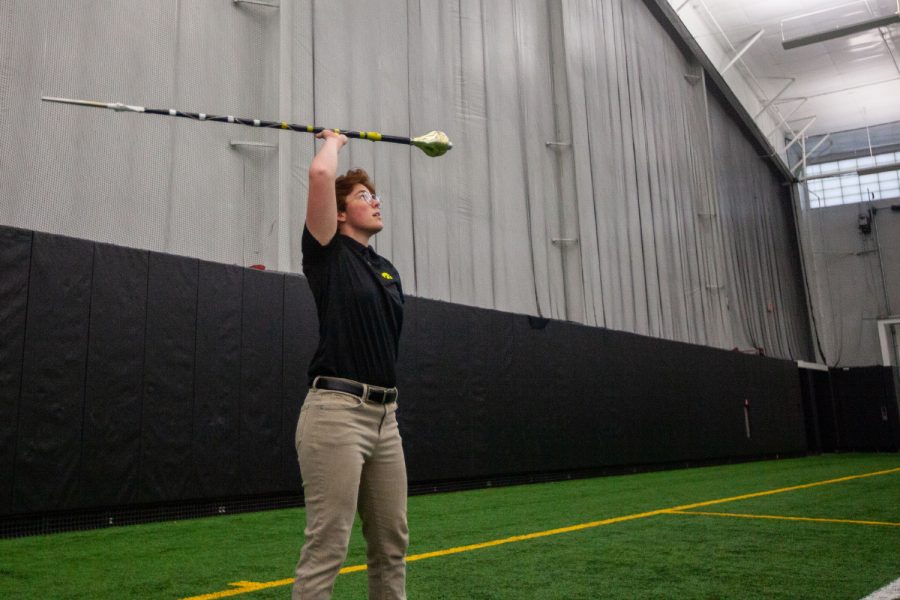 Amanda Thomas, University of Iowa Hawkeye Marching Band Drum Major, performs inside the Hawkeye Tennis and Recreation Complex on Wednesday April 7, 2021. “I am beyond excited to get started,” Thomas said.

As a high school student, Amanda Thomas declared to Twitter that she would become the Hawkeye Marching Band’s first-ever female drum major. Although that history was made before she came to the University of Iowa in 2017 by Analisa Iole as the first woman to hold the position since World War II, Thomas will now follow in Iole’s footsteps to lead 260 marching Hawkeyes into Kinnick Stadium.

The Hawkeye Marching Band drum major is the highest rank an undergraduate band member can hold. They teach marching fundamentals to the band, play a large role in outreach and community engagement, and perform energetic routines spinning a mace during pregame and halftime shows alongside the band’s Golden Girl, the marching band’s feature twirler.

Thomas will be a fifth-year music education and horn performance major next year, and previously served as the mellophone section leader for the past two seasons. She’s played in band since age 12, and became interested in marching band long before that, when her grandma would bring her to her cousin’s marching band performances. She said she liked to stand next to the drumline so she could feel the vibrations the instruments made while they warmed up.

A long stretch of time separated the first women to lead the band — in 1943 on a temporary basis — to Iole and Thomas’ leadership in the last five years.

In 1943, Rose Day of Mason City and Mary DuMont of Anamosa led the 90-person Hawkeye Marching Band as the first female drum majors, an October 1943 issue of The Daily Iowan reported. At the time, World War II raged across Europe, and college-age men were drafted into the U.S. military to be sent overseas.

Band Director Eric Bush said women were not permanently allowed into the band until after Title IX in 1972, and even after that, a long road awaited many women to be selected for leadership positions.

Even so, Thomas said she had several women to look up to while she prepared for her audition. The University of Iowa senior practiced becoming the band’s next leading Hawkeye for over two years, learning from past female drum majors, including Iole and her partner, who served as drum major for the Marching Illini.

“I’ve seen so many great leaders in this role before, especially Analisa, I really looked up to her,” Thomas said.

Thomas auditioned for drum major alongside five other students at the end of March, having prepared for the rigorous, six-hour process by practicing daily for a month prior to audition day, and often several times a week before that. She even held herself to a strict diet for four months before trying out, eliminating fast food, sugary drinks, alcohol, and ice cream to build muscle.

Once the audition ended, Thomas joked, she went straight to Culver’s to celebrate completing the process with a meal of chicken tenders, ranch, fries, and ice cream.

Outside of her band commitments, Thomas works as a safety supervisor at Cambus. She was in a Zoom meeting with other supervisors and managers when she got the call from Bush the Monday after her audition. She said she felt like her heart stopped when he formally extended the position to her.

“I started crying. I was shaking,” she said. “In my meeting, they had known I had worked for this, I talked to them about it at work, and so they all knew and they were like, ‘Oh my God, she got it!’”

Bush applauded Thomas’ many years of leadership, saying her energy, powerful field presence, and clear goals for the band’s next season made her the ideal candidate for the position.

“When she enters this position, she will automatically have the respect of her peers because of the work that she’s put in in her first four years in the band,” he said. “She’s a genuinely caring and humanistic individual who wants the band to succeed and also cares about the individual members.”

While the pandemic eliminated the band’s opportunity to play for 70,000 cheering fans in Kinnick Stadium this past fall, she said she’s hopeful for the opportunity to possibly play live next season and plans to teach and lead a new generation of marching Hawkeyes with refreshed determination.

“I think this generation of the Hawkeye Marching Band has the potential to be the best we’ve ever had,” she said. “These people know what it’s like to go through a struggle. They know what it’s like to have things they really truly love taken away from them, and I think when they get the opportunity to perform again, they’re going to be the most dedicated and hardworking people in the world.”

Thomas said that while she doesn’t feel any different than anyone else who has held the drum major position before her may have, she does look forward to the idea of being an inspiration to other young girls and women who haven’t previously seen themselves represented often in the position.

“I’m just hopeful that I’m not the last, I don’t think I will be,” she said. “There’ll be a lot more after me….there’s been a lot of female leaders for years that have been in section leader positions or undergrad staff positions that aren’t as recognized as me and I’d like to highlight them and their work for allowing this to happen.”