Student organizers put together a week-long popup clothing closest to provide an inclusive space for queer and trans students to find gender-affirming clothes. 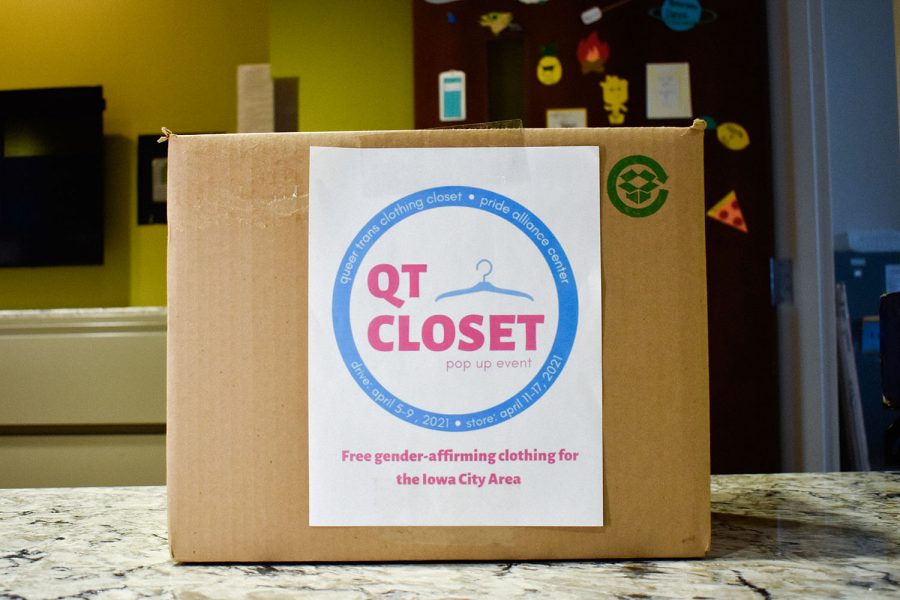 The QT Closet Drop Off box is seen at Peterson Residence Hall on April 8, 2021. The Queer Trans Clothing Closet was created by the Pride Alliance Center to offer free gender-affirming clothing for the Iowa City Area. The first pop-up will take place next week at the Pride House.

The project’s goal is to help meet the needs of queer and trans students on campus by providing donated casual clothing, said UI senior Savannah DeGroot, since replacing old clothes can become expensive.

“So that’s part of where the idea comes from,” DeGroot, one of the organizers for the event, said. “We were like, ‘it has to be free, and it has to be a queer-centered space.’”

The popup closet will be collecting donations until Friday, DeGroot said. Donors can drop off clothing at the Vice President for Student Life Office, IMU249 and Burge, Peterson, Catlett, and Mayflower main desks.

The first popup will be during the week of April 12-16 on an appointment basis. DeGroot added that all clothes will be sanitized before being set up in the popup, and students will need to sign up for a time so that staff can sanitize the area before the next appointment.

UI graduate student Alyssa Rae Plano, who is also helping run the event, said the organization has taken precautions to make sure the event will be safe for students who attend, such as limiting the number of people allowed in the space at a time.

“There will be no more than five people in the space at a time. We’re also sanitizing the space before and after people arrive,” Plano said. “We’re staggering appointments by 10 minutes to give people some time between appointments so that there’s no overlap. We have bathrooms for people to try on the clothes because we thought that was important and those clothes will be set aside so people know they’ve been tried on.”

According to organizers of the event, this project has been a long time coming. After having to delay the launch of the project because of the pandemic, DeGroot said they’re excited to open to students this week.

RELATED: University of Iowa to distribute vaccines for students and staff before semester’s end

UI senior Allie Beery, who plans to donate to the closet, said they find the idea of creating a safe space for queer and trans people to shop to be comforting.

“Being queer or trans, it’s kind of a scary thing to come into,” Beery said. “[At the closet] you’re getting hand-me-downs from people who have kind of experienced the same things in whatever way, so it feels like it’s connecting. It’s a really cool community thing. It’s lovingly being like ‘let me help you out and give you a safe space, so no one judges you when you go for masculine or feminine things.’”