Too soon to tell if Iowa will remain a purple state, politicos say, despite ruby red 2020 election results

Despite former President Donald Trump sweeping Iowa in 2016 and 2020, political-science experts say that Iowa will remain a swing state. 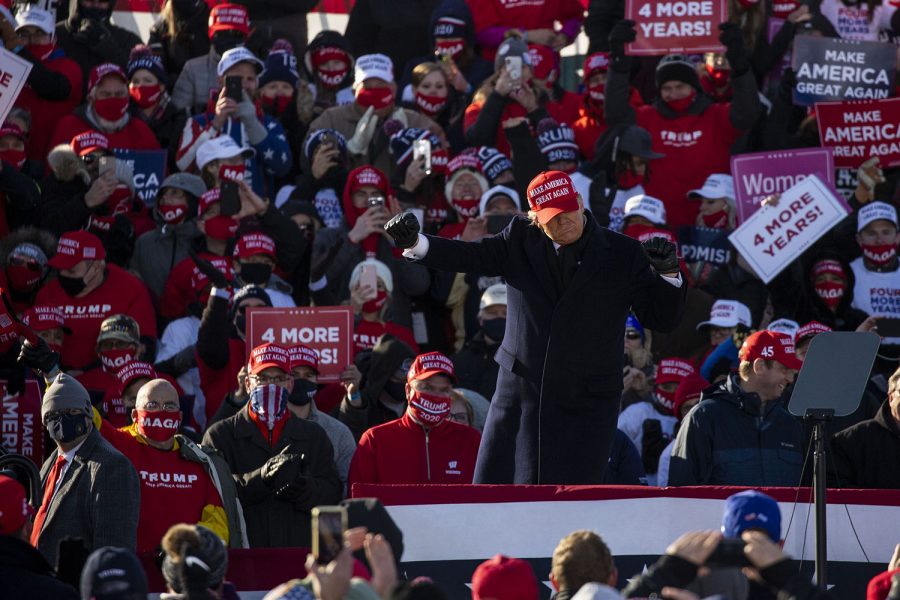 President Donald Trump dances during a “Make America Great Again” rally held at the Dubuque Regional Airport on Sunday, November 1, 2020. With two days before Election Day, this is President Trump’s second stop to Iowa in the past few weeks.

In the 2020 election, amid a global pandemic, former President Donald Trump won Iowa, Sen. Joni Ernst won reelection, two districts flipped from blue to red, and Republicans gained seats in the Legislature. Iowa, a historically purple state, may look like it will no longer swing, but experts say it’s too soon to tell whether Iowa will stay red for good.

Tim Hagle, University of Iowa political science professor and former adviser for UI Campus Republicans, said that while Iowans may have favored Republicans in the 2016 and 2020 elections, Iowa is still considered a swing state.

“Yes, we’re in a period right now where Republicans have been very successful in the voting booth,” Hagle said. “But it runs in cycles. There was a time when Democrats were in control not all that long ago.”

He’s referencing the period from 2007-2010 when Democrats held the Governor’s Office and a majority of seats in the two legislative branches.

Iowa Republican Party Chair Jeff Kaufmann said the Republican Party was able to get a leg up in the 2020 election because they still campaigned door-to-door while the Democrats decided, he said, to re-engage too late.

Citing the pandemic, many Democrat campaign events were held online or canceled in order to promote social distancing, while many Republican events remained in-person and in favor of interacting with voters.

“They should have been talking to voters, because you could do that safely and could wear a mask and stand back eight feet and put something on a door hanger on a door, and still interact with the voters,” Kaufmann said.

Republicans and Democrats both blame the other party for politicizing the pandemic. Kaufmann said Democrats were at fault for not giving Trump a genuine chance to prove himself.

“If you approach something that every single thing that a leader is going to do is going to be absolutely wrong before they even get the sentence finished, that’s politicizing it. And I think that’s what happened,” Kaufmann said.

Hagle said because of Iowa’s large number of registered no-party voters, it’s nearly impossible to tell which way the votes will always swing. He said “kitchen table” issues are the key — issues such as jobs, the economy, and health care that will determine how Iowans vote, and these issues were even more prominent during the pandemic.

Ahead of the 2020 presidential caucuses, 37 percent of registered voters in Iowa were independents, making them the largest registered group at around 740,000, and by January of 2021, that number dropped to about 675,000 and sent Republican numbers up.

Hagle said that because of the increase of absentee ballot-request forms sent by the Iowa Secretary of State’s Office during the pandemic, more Iowans registered as either Republican or Democrat since Iowans must claim a party affiliation to vote absentee in primary elections.

Between January and July of 2020, the number of no-party registered voters in Iowa dropped from around 700,000 to 600,000. For the first time in 20 years, there were fewer no-party voters than Democrats or Republicans, Hagle said.

While Iowa has a Republican governor and a Republican secretary of state, the state still has a Democratic state auditor and attorney general which, Hagle said, shows that Iowa is not as deep red as many think it is.

Iowa has had a mix of Republican and Democratic leaders over the last several decades. Tom Harkin, a Democrat, served as a U.S. senator alongside Sen. Chuck Grassley from 1985 to when he retired in 2015. His seat was filled by current senator and Republican Joni Ernst.

Former Iowa governor Tom Vilsack, a Democrat who is currently the U.S. Secretary of Agriculture, served as governor from 1999 to 2007. His seat was taken over by another Democrat, Chet Culver, where he served from 2007 to 2011.

David Yepsen, former Des Moines Register political columnist and host of Iowa Press, said regardless of the pandemic, he sees Iowa becoming redder because of the state’s demographic makeup — more specifically, the aging rural population. According to the Iowa Data Center, 17 percent of Iowans are over the age of 65, and in 2018, 78.5 percent of Iowans over 65 registered to vote.

“The question is, … is Trump on the ballot or not in 2024? That’s number one, because if he’s not, that could be a good year for Democrats because it takes Trump himself to turn out Trump voters,” Yepsen said.

As of April 1, there are 687,563 registered active Democratic voters and 715,342 registered active Republican voters, according to data from the Iowa Secretary of State. Yepsen said this is a fairly even split, which is good news for both parties heading into 2022 and 2024.

Muscatine County Republican Party Chair Fred Grunder said he thinks Democrats are becoming too progressive, and that might be a reason why more Iowans decided to vote Republican this year.

“It’s pure craziness out there,” Grunder said. “I think the people of Iowa, or at least the majority, are tired of it and fed up with what is going on on the left. There are a lot of good Democrats, but they are letting themselves be pushed farther to the left.”

Grunder said that the pandemic will be an issue when it comes to voting in the 2022 election and will hurt the Republican Party. He said that Reynolds did not keep the state open enough and Iowans will remember that, and it will reflect in how they decide to vote.

“That’s leadership, or lack thereof, at the top,” Wilburn said. “You know, the previous president tapping into fear, tapping into hate, tapping into misinformation, that that was the hallmark of his presidency.”

Reynolds never fully shut down the state. Specific hours and capacity of businesses were enforced, but Iowa never had a state-wide mandated lockdown.

Reynolds announced the first state of emergency concerning the coronavirus on March 17, 2020, and issued a mask mandate and re-introduced restaurant capacity limits from March eight months later on Nov. 16, 2020.

By November 2020 when the first mask mandate was put into place, Iowa ranked 28th worldwide for number of deaths per 1 million people and was one of the top 10 riskiest states to visit in the U.S. according to Forbes.

UI political-science professor Tom Rice said that with the polarization of the pandemic a wedge was driven between the parties even further.

“So, when you have this deep divide between parties and you lay on top of that, a very emotional and frightening issue like COVID, it can be politicized quickly and it can cause people to even sharpen their division,” Rice said.

This wedge has been around for a while, Rice said, because both parties already held a lot of distrust for each other, but COVID-19 allowed the parties to attribute the worst to the other.

Rice said many Democrats were expecting more of a blue wave this cycle because they wondered why anyone would want Trump to return to office, but he knew that may not be the case, and actually expected the state to vote redder this election. He said that the Democrats needed to walk in the shoes of those who supported Trump and try to understand why they support him.

“But I think I’ve always tried to understand why we people believe what they believe. That’s one of the things that’s really made me most curious about politics,” Rice said.

Rice said that the pandemic will not have a lasting impact on elections, because the U.S. tends to put these things behind it, and COVID-19 will be largely forgotten or ignored by the 2024 election. No one will be making their decisions in the voting booth based off of how the pandemic was handled, he said, because he expects when life and politics has returned to normalcy, the public will have new issues to focus on.

Kaufmann said that while the state became redder this past year, the Republican Party will still remain active and diligent to ensure even more Republican votes.

Wilburn said that moving forward, his party will focus on building relationships, organizing year-round, and informing Iowans about what laws are actually going through the Legislature.

Republicans across the state have mixed views on how Reynolds handled the pandemic. While some believe she applied too many liberal measures, others like how she managed to keep the state open.

Kaufmann said many Republicans and even some rural Democrats have coalesced around the governor. He said the way Reynolds walked the line between safety and keeping businesses open has brought conservative voters together.

“I think that has helped at the ballot box, definitely, I think it’ll help for 2022 and I definitely think it was something that helped in 2020,” Kaufmann said.

Iowa Democratic Party Chair and state Rep. Ross Wilburn, D-Ames, said that moving forward, his party will focus on building relationships, organizing year-round, and informing Iowans about what laws are actually going through the Legislature.

“That’s leadership, or lack thereof, at the top. You know, the previous president tapping into fear, tapping into hate, tapping into misinformation, that that was the hallmark of his presidency,” Wilburn said.