The Hawkeyes scored a 397.700 in the program’s final Big Ten Championships. 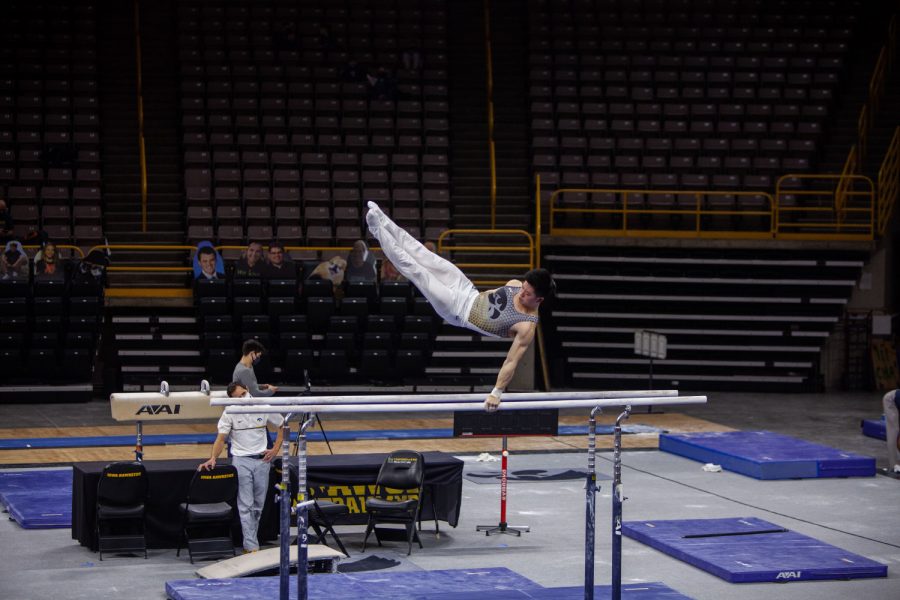 Iowa all around Bennet Huang performs on the parallel bars on Saturday, Feb. 20, 2022 during the Iowa vs. Penn State men’s gymnastics meet at Carver-Hawkeye Arena. Iowa defeated Penn State 398.850-393.550. Huang tied for first overall with teammate Carter Tope with a final score of 13.350.

The third-place finish is the best in the program’s history since 2006.

The competition is the last Big Ten Championships for the Iowa men’s program, as it is being terminated after the 2020-21 academic year because of financial implications caused by the pandemic.

Four Hawkeyes earned All-Big Ten honors, which was most in the Big Ten. Senior Bennet Huang led them Saturday. Huang finished fourth place in all-around with a total of 81.550. The score was good enough to earn the Palo Alto, California native first-team All-Big Ten.

On floor, Davis led the way with a career-high 14.600 to finish tied for second. Senior Kulani Taylor earned himself a season-best 14.200 to finish 12th. Freshman James Friedman had a career-high score of 13.950 to tie for 17th. Iowa finished the event with a season-high 70.500.

On the rings, Hobson notched himself a career-best to place tied for second. He scored 13.900 for the placement. Davis tied for 10th, while Friedman and Huang both shared 13th. Brown finished tied for 20th with a 13.200. Iowa posted a season-high on rings with a 67.400.

Huang once again led the way for the Hawkeyes on vault. His 14.400 was good enough to tie for seventh place. Brown scored a 14.350, placing him in ninth. Friedman earned himself a 14.250 for 13th and a career-best.

Davis was the highest finisher for the Hawkeyes on high bar. He finished 12th after posting a 13.150. Huang followed with a 19th place finish after scoring a 12.850. The Hawkeyes ended the last rotation with a score of 62.800.

With it being the program’s last Big Ten Championships, Iowa head coach JD Reive said it’s a memorable one.

Although it was the team’s final Big Ten Championship, they’re not done yet. Iowa will compete for a national championship in the NCAA Championships April 16-17 in Minneapolis inside Maturi Pavilion.