The GymHawks have had multiple recognitions pile up throughout the regular season as the team heads to the NCAA Tuscaloosa Regional. 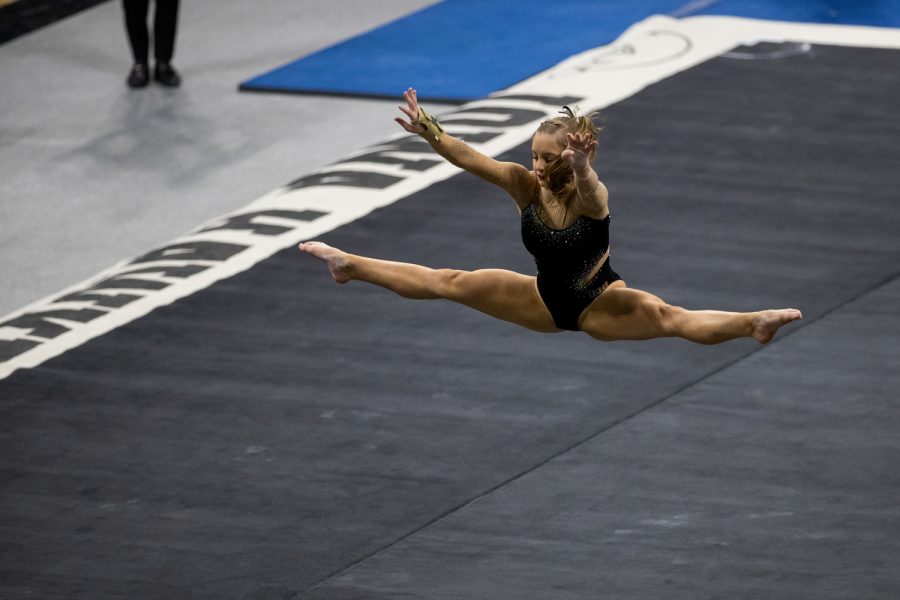 Iowa’s Lauren Guerin is seen doing a jump during her floor routine at a women’s gymnastics meet between the Iowa Gym-Hawks and the Minnesota Golden Gophers at Carver-Hawkeye Arena on Saturday, Feb. 6, 2021. The Hawks defeated the Gophers, 196.800-196.375.

While the team has been successful, numerous gymnasts and head women’s gymnastics coach Larissa Libby performed well enough throughout the regular season to be recognized following it.

Guerin and Henderson are the GymHawks third and fourth Big Ten champions on the floor and the first since 2004. Alexis Maday was the last GymHawk to win the floor title. Maday won three-floor titles in 2001, 2002, and 2004.

Guerin, Henderson, and senior Clair Kaji were all named to the Big Ten All-Championships Team thanks to their performance at the competition.

Freshman Adeline Kenlin has made her name known as one of the best freshmen in the country. After the Big Ten Championships, the Iowa City native was honored by being named the Big Ten Freshman of the Year.

Kenlin, who was also named to the first-team All-Big Ten, earned the award after her standout freshman season, where she won five event titles. She set a school record on beam, with a score of 9.975 on March 14 against Nebraska. She also earned four Big Ten Freshman of the Week honors throughout the regular season.

Alongside Kenlin, Libby was named as the Big Ten Coach of the Year. It’s the third time she has received the distinction and the fifth time an Iowa coach has received it. Libby previously won the honor in 2008 and 2017.

“You don’t win Big Ten Coach of the Year without a great staff and a great team,” Libby said. “That award is as much for my staff and my team as it was for me. It’s as much about recognizing what they did as my guidance in all of it. I’m very honored and humbled by the award and the love that came behind it.”

In 2021, Libby led the GymHawks to their first Big Ten regular season title in school history. During the season, Iowa reached as high as No. 7 nationally — the highest ranking in program history.

The GymHawks also earned three first-team honors, which is the most in school history. Iowa also had nine gymnasts earn Big Ten weekly recognition during the regular season, also a program high.

The awards and honors didn’t stop there.

Guerin was a first-team selection on floor, while Henderson and Kenlin were honored with second-team honors on floor and beam. It’s the first time in program history where the GymHawks had three All-American honors in the same season.

This is Guerin’s second All-American distinction, with the first coming in 2020, where she was a second-team All-American. The Austin, Texas, native earned the honor after having a 9.950 National Qualifying Score on floor.

The second-team honor for Henderson is the first of her career. She finished the floor with a National Qualifying Score of 9.944. The Peoria, Illinois, native and first-team All-Big Ten selection tied the school record on floor with a 9.975 against Minnesota and Maryland Feb. 13.

Kenlin earned her All-American distinction after finishing with a National Qualifying Score of 9.944 on beam. She scored 9.900 or higher on beam in five meets during the season, including tying the school record with a 9.975 against Nebraska March 14.

Libby couldn’t be more ecstatic about the recognition and performance of her team.

“It’s so exciting,” Libby said. “A first-team All-American and to have two young kids. Adeline’s a freshman and technically [Henderson] is too. It’s her first year competing. For those two to come out, and in a COVID year, win second-team All-American. They love to compete, and there is nothing better than being rewarded for your hard work, especially when you’re having fun. What a blessing.”

For the Iowa women’s gymnastics team, this season has been one for the ages, and it’s not done yet. The GymHawks start their road to the NCAA Championships with the NCAA Tuscaloosa Regional Friday at the University of Alabama.