Paving the way: Women in male-dominated fields detail their journeys to success

Fields with a focus on science or religion have traditionally dominated by men. This may be changing, but some women had to pave their own way to the career they desired. 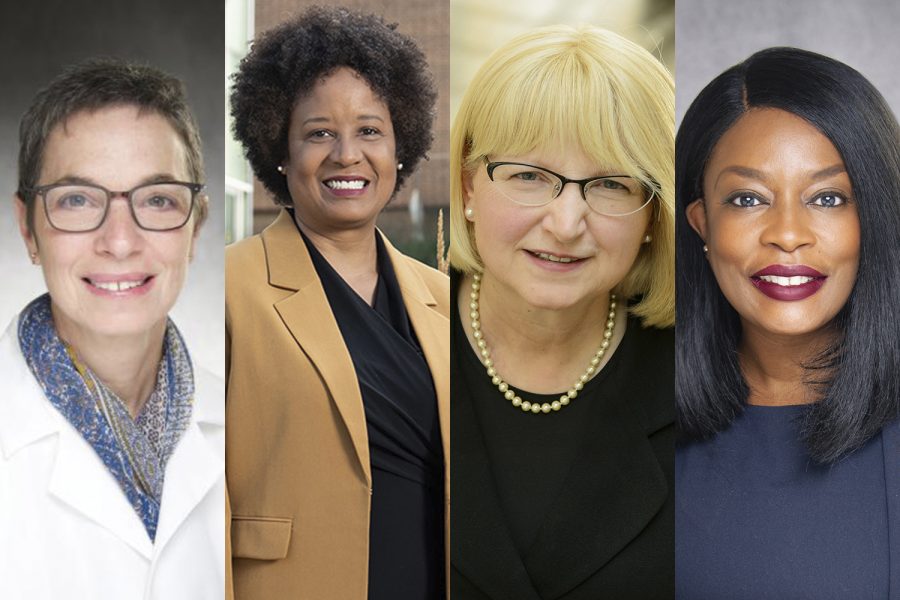 Women have been underrepresented for years in many science and religion-related fields. While the gender gap is improving, it’s still noticeable in some specialized areas.

The Daily Iowan interviewed women in public health, engineering, medical professions, and in religious leadership to detail the challenges and successes they’ve had throughout their careers as women paving the way for more women to enter the fields.

University of Iowa Clinical Assistant Professor of Internal Medicine Claudia Corwin started out her career as a transplant surgeon, but always maintained an interest in working in public health.

When Corwin was wrapping up medical school at Washington University, she said the dean told her it wasn’t possible to combine surgery and public health — the two fields weren’t compatible.

Corwin went on to work as a transplant surgeon, a highly specialized field that had few women working it, but she still wanted to work in public health. According to data from a survey conducted by the American Society of Transplant Surgeons Membership and Workforce Committee with responses from 72 transplant centers, 13.7 percent of transplant surgeons were women in 2019, compared to 3.7 percent in 1980 and 18.4 percent in 2010.

As she was leaving for maternity leave for her third pregnancy, Corwin got a call from the director of the Iowa Department of Public Health asking to interview her for a position.

She put her work as a surgeon behind her once she became the medical director of the state bioterrorism program and bioterrorism cooperative agreement, which involved preparing Iowa for a response to bioterrorism or other types of emergencies, including planning in the case of a pandemic, Corwin said.

She now combines her interests and works in environmental and occupational health.

“This is a field where I could really wear my public health hat and my clinical medicine hat at the same time,” Corwin said. “It also really allowed me to explore a really deep passion I’ve had since college, which is the health and public health related to people who fall into the very porous health care safety net.”

Corwin said her career path has been varied and involved deliberate steps on her part to find the right path for her. She said she had a vision of where she wanted to go and that now she gets to talk to people who share her passions, and feels she’s doing work that’s fulfilling her and making a difference in people’s lives.

“I loved surgery,” she said. “But at a certain time, I chose to go in another direction, and one thing I’m really proud of is being able to make a successful transition, and to have the big picture in mind, and not get lost in the weeds of the day-to-day uncertainties.”

Other women on campus have also experienced multiple career changes on the way to their current positions.

UI Hospitals and Clinics Chaplain Yolanda Kirk owned a salon, worked at a domestic violence shelter, directed a company that helped older adults stay in their homes, and worked at a halfway house before becoming a Baptist reverend.

Kirk said she felt a call from God to work in ministry but shooed the notion away because the field is male-dominated.

“They, for years, pretty much frowned upon women becoming reverends or ministers,” she said. “So, that was one of the reasons why I kind of said no, but God kept just pressing on my heart, that this was what He was calling me to do, and I finally said yes.”

As UIHC chaplain, Kirk said she visits patients throughout the day from a list she is given in the morning and makes rounds in the hospital’s burn unit. Outside of working at UIHC, Kirk said she teaches a Bible study group and assists her husband, who is also a minister, and the associate minister at their church in visiting and praying for parishioners.

One of the biggest obstacles Kirk has faced is working with people who don’t believe a woman should be a minister. She said it hasn’t been an issue with the people she’s serving, but more with leadership within the church who don’t believe women should be allowed to preach. She’s found it more of an obstacle in the Midwest than on the East Coast where she used to live.

“It’s pretty different here. On the East Coast, you will find more leaders, and pastors will have embraced that God can call a woman to minister,” Kirk said. “But in the Midwest, it is still in some areas a bigger struggle for men to agree that God can call whoever He’d like.”

According to a report from the Pew Research Center, nine Christian denominations allowed women to be ordained and serve in top leadership positions in 2016. At the time of the study, only four of those denominations had ever had a woman serve in the top leadership position — American Baptist Churches USA, Evangelical Church of America, Episcopal Church, and United Methodist Church.

Kirk said she just stays focused on the task at hand and tries to center herself, and she uses her faith as a reminder she’s doing what God intended for her.

UI Professor and Chair of Preventative Nutrition Education Linda Snetselaar studies dietary patterns and nutrition and said the type of research she does has frequently been led by a male principal investigator in the past.

According to data from the United Nations Educational, Scientific and Cultural Organization, 30 percent of researchers in the world are women.

Snetselaar said she found an interest in nutrition as an undergraduate at Iowa State University. She then came to the UI to be a dietetic intern and decided to earn her master’s degree here.

Snetselaar’s research currently focuses on how dietary patterns impact autoimmune diseases. She said she’s working with a lot of female researchers to conduct the study, which is something that’s become more common as her career has progressed.

“I think that male/female dominated science is incredibly important,” she said. “Often you’re recruiting people into a study, and it’s very important to people who sign up to be a part of a research study to be able to see both males and females directing a study matters a great deal.”

She said she believes having both male and female researchers involved in a study makes it richer and can make research participants comfortable, Snetselaar said.

Her career has been rewarding in terms of the results coming out of her research, but also in the way she’s learned how to juggle both home and work life. She said she’d love to see more women find the medical field as an option for a career because it’s possible to work and have a home life.

“I think it certainly shouldn’t be something that is of a major concern or something that stops a young person today thinking about going into the field of science,” Snetselaar said.

UI College of Engineering Dean Harriet Nembhard said she believes women can bring additional perspectives and ways of thinking to fields that are traditionally male-dominated.

“It’s important that we continue to try and build a society that recognizes and leverages the potential of every person, regardless of gender identity, race or ethnicity, or any other aspects of their identity,” Nembhard said.

From a young age Nembhard was always asking questions about how different systems worked. Later in life these curiosities made her realize she was meant to be an industrial engineer, she said.

For the first 10 years of her career, Nembhard said she focused on manufacturing systems, from automotive to carpet manufacturers, and to General Mills making cereal.

Her mother was diagnosed with late-stage breast cancer in 1997, Nembhard said, but had received false negatives during mammograms prior to her diagnosis. This caused her work to shift to a health care focus.

After about 12 years, Nembhard shifted direction again and began working in academia as an administrator at Oregon State University, she said. The profession had always made sense to her as a fourth-generation educator, she added.

Nembhard has been in academia for 26 years and was raising her family while on the tenure track, she said.  While it wasn’t unusual for women in academia to have families, Nembhard said it presented a number of challenges when it came to balancing her work and family life.

While an educator, Nembhard has been able to mentor many students on their way to completing a doctorate, as well as postdoctoral students and research assistants — something she said she is very proud of.

As an educator and engineer, Nembhard wants women to feel encouraged to pursue the careers they want to and contribute to those spaces.

“I think that having women understand from the very beginning that these can be your choices … here are the ways you can really have an impact,” Nembhard said. “Here are the ways that you can change the way even science works, and is interpreted, and is leveraged for our communities. That’s really what I see as critical.”