After struggling to beat ranked teams during the regular season, the Hawkeyes found success in the postseason. 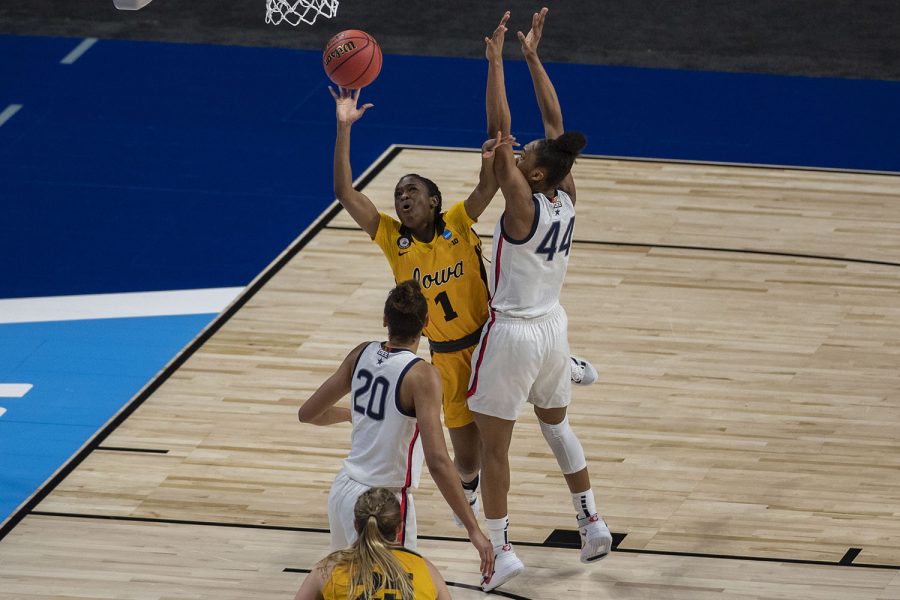 Iowa guard Tomi Taiwo attempts to shoot a basket during the Sweet Sixteen NCAA women's basketball championship against UConn on Saturday, March 27, 2021 at the Alamodome in San Antonio, Texas. The Hawkeyes were defeated by the Huskies, 92-72. While No. 5 Iowa played their last game today, No. 1 UConn will advance to the Elite Eight on Monday.

Iowa women’s basketball certainly had an unconventional 2020-21 season. Three of its games were postponed, its schedule was reduced from 29 games in 2019-20 to 22 in 2020-21, and it played all its games without fans in Carver-Hawkeye Arena’s stands because of COVID-19.

The Hawkeyes never had a chance to make an appearance in the 2019-20 NCAA Tournament after it was canceled in March 2020 when the coronavirus began spreading across the U.S., halting all sporting events and campus-related activities. This year, however, the Hawkeyes received their opportunity to compete against the NCAA Tournament’s field of 64 teams.

The Hawkeyes had trouble taking down the nation’s top teams during the 2020-21 regular season, although they kept their losses close. But the Hawkeyes exceeded expectations in the postseason.

Before the NCAA Tournament, Iowa upset then-No. 3 seed Rutgers in the Big Ten Tournament quarterfinals. In the league semifinals, the Hawkeye bested then-No. 7 seed Michigan State to advance to the championship game.

Iowa fell to Maryland, 104-84, in the conference championship game on March 13.

The only ranked team Iowa defeated during the regular season was then-No. 12 Michigan on Feb. 25.

Hawkeye head coach Lisa Bluder said the team had come a long way, after how hard this year has been because of the pandemic. With how young the team is, Bluder said she believes its only touched the surface and could go farther in future tournaments.

“The expectations should be extremely high,” Bluder said. “I mean, nobody else expected much of our team this year, but we did. We’re the most important people in that locker room that believed in each other, knew that we could have a special year. Moving forward, that’s just going to get better and better.”

Prior to their 2020-21 NCAA Tournament berth, the Hawkeyes last appeared in the national bracket in 2018-19. The Hawkeyes made it to the Elite Eight in that tournament, but fell to Baylor, who went on to win the national championship, 53-85.

The 2018-19 run is the deepest the Hawkeyes have made since their Final Four appearance in 1993.

Because of the shortened 2020-21 schedule, it is difficult to compare how Iowa’s overall record stacks up against its past records.

The Hawkeyes’ 20-10 record gives them a .667 win percentage this season, despite their second-in-the-nation, 86.1 points per game scoring offense.

Last season, Iowa’s win percentage was .767 with a 79.5 points per game average.

After their Elite Eight appearance in the 2018-19 season, the Hawkeyes had a win percentage of .806 and a 78.4 points per game average.

Compared to its most successful seasons since 1993, Iowa’s win percentage this year is a bit underwhelming. The Hawkeyes’ points per game average, however, was significantly higher than it has been in years past.

“Our goal is, we want to be in a Final Four,” Bluder said. “We want to take Iowa back to a Final Four. That’s where the direction that we’re trying to go, that we will go.”