Scouting report | Iowa women’s basketball matches up with No. 1 UConn in Sweet 16

The Connecticut Huskies' offense and defense rank top-five in the nation. 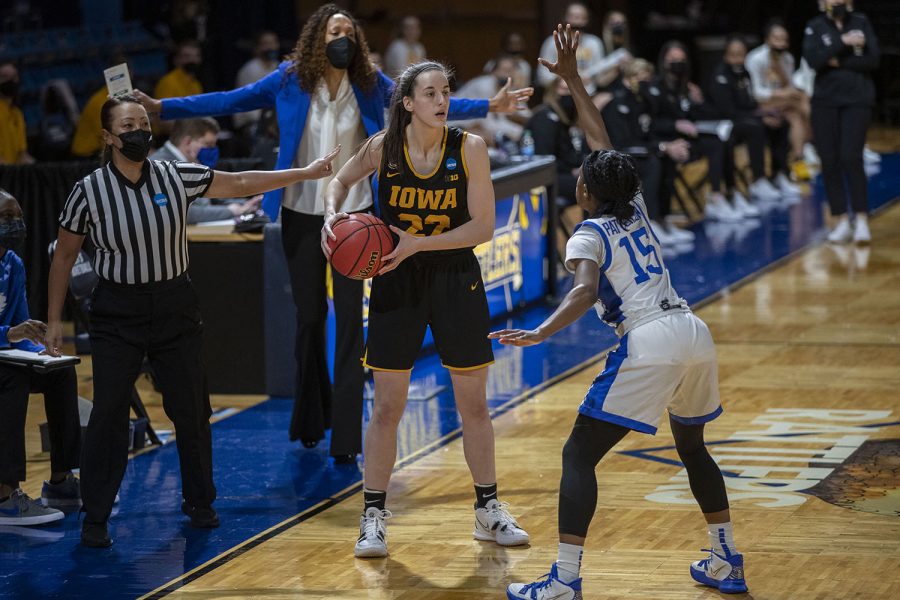 Iowa guard Caitlin Clark looks to pass the ball during the second round of the NCAA women's basketball championship against No. 4 Kentucky on Tuesday, March 23, 2021 at the Bill Greehey Arena at Saint Mary's University in San Antonio, Texas. The Hawkeyes defeated the Wildcats, 86-72. No. 5 Iowa will go on to play the winner of tonight's 8 p.m. game between No. 1 UConn and No. 8 Syracuse in the Sweet Sixteen starting on Saturday.

SAN ANTONIO — After taking down its first two opponents by double digits — 12th seeded Central Michigan, 87-72, and fifth-seeded Kentucky, 86-72 — Iowa women’s basketball is back in the Sweet 16 for a second consecutive NCAA Tournament.

And Iowa’s opponent is the top team in the country: University of Connecticut.

The fifth-seeded Hawkeyes will take on No. 1 seed UConn on Saturday at noon in San Antonio, and it’s Elite Eight or bust. The game will be broadcast nationally on ABC.

UConn, sitting at 26-1 on the season, has been at the No. 1 spot in the AP poll for the majority of the regular season, while Iowa (20-9) didn’t crack the top-25 ranking throughout the 16 weeks of regular season play.

On Saturday, the coveted matchup will be a high-scoring affair, as both teams rank top-five in offensive scoring in Division I Women’s Basketball.

Iowa averages 86.6 points per game – good for second in the nation. UConn is just two spots removed at fourth, putting up an average of 82.8 points per game. But the Huskies top the charts in team field goal percentage, making 51.7 percent of their shots.

“I love offense, and I love [UConn’s] offense,” head coach Lisa Bluder said. “I love how all five players can score, I love their high field goal percentage, their high 3-point percentage, and how they distribute the ball.”

UConn also touts a solid defense, allowing only 50.7 points per game. On the other hand, Iowa allows an average of 80 points per game, the highest in Division I Women’s Basketball.

“Great teams play both [offense and defense] right?” Bluder said. “To get to this level, they do both really, really well.”

Freshman point guard Paige Bueckers, the Big East Freshman and Player of the Year, leads the Huskies with 19.9 points per game.

Bueckers and Iowa freshman point guard Caitlin Clark have been constantly compared to each other throughout the season. But both emphasize that it not a Bueckers and Clark matchup in the Sweet 16 but Iowa and UConn.

“Obviously, one of our main focuses is on [Bueckers],” Clark said. “But they have so many talented players, so it’s going to be a whole team effort on every single person they have.”

UConn’s post player, Olivia Nelson-Ododa, stands at 6-foot-5, giving 6-foot-3 Monika Czinano a battle at the five-spot. Nelson-Ododa is the Huskies’ leading rebounder, averaging 7.7 per game, and carries a .582 shooting percentage in the paint.

UConn has been a familiar foe for teams in the NCAA Tournament. Since 2000, the Huskies have won 10 national titles and have appeared in 17 of the past 20 Final Four matchups.

As a young team and part of a program that has never won a national championship and only been to the Final Four once in program history, Clark said the Hawkeyes have nothing to lose Saturday.

They’re not going to be swayed by Huskies’ NCAA Tournament dominance.

“Personally, I’m not going to be starstruck,” Clark said. “It’s a team I grew up watching, but it’s a good opportunity more than anything else. That’s what the coaches have been telling us, ‘You have the chance to do something special here.’ And we’re going to believe we win, that’s what we come into every game thinking. We believe in each other, we believe in this team. When we step on that court, we’re not scared. We’re going to put everything on the line.”