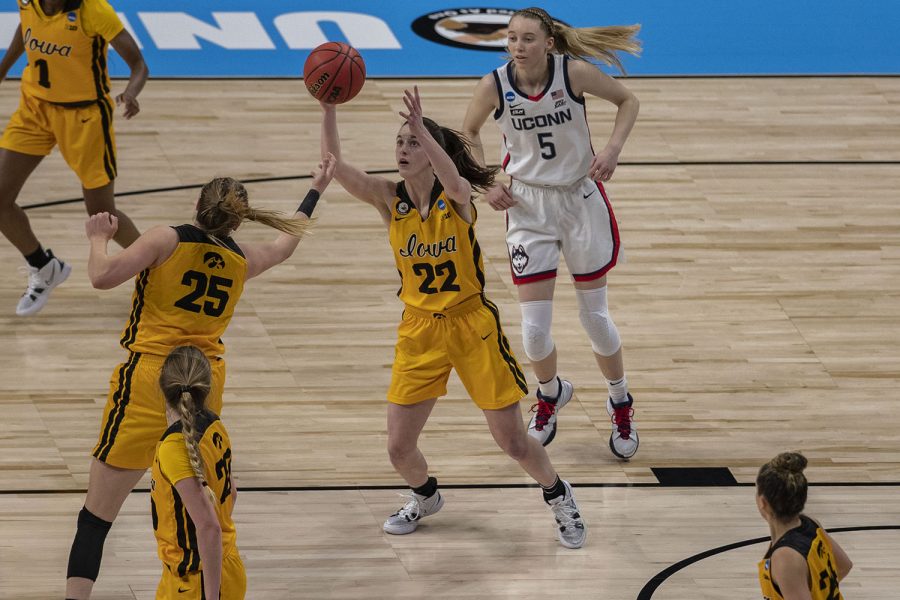 Iowa guard Caitlin Clark reaches for a pass during the first quarter of the Sweet Sixteen NCAA women's basketball championship against No. 1 UConn on Saturday, March 27, 2021 at the Alamodome in San Antonio, Texas. The Hawkeyes are trailing behind the Huskies, 49-35 at halftime.

SAN ANTONIO — The Elite Eight dreams of Iowa women’s basketball did not become reality Saturday, as the fifth seeded Hawkeyes fell to the top-seeded UConn Huskies, 92-72, in the NCAA Tournament’s Sweet 16.

After the Huskies won the opening tap, the first 90 seconds of Saturday’s game didn’t see a single shot drop for either team.

When a media timeout was called with 3:52 remaining in the first quarter, Iowa trailed, 18-10.

Hawkeye point guard Caitlin Clark scored her first basket of the game on a 3-point shot late in the first quarter. The shot cut the Hawkeyes’ deficit to five.

UConn struck first in the second quarter, dropping a layup to take a six-point lead.

As the second quarter progressed, the Huskies raced out to a 10-point lead over the Hawkeyes. With 4:55 remaining until halftime, UConn led Iowa, 36-26.

By halftime, UConn had extended its lead to 14 points.

The Huskies scored first in the second half, but Hawkeyes struck back, starting the half 4-of-5 from the field.

Despite Iowa’s hot second-half start, UConn still managed to push its lead to 15 with 4:34 remaining in the third quarter.

After a timeout, Clark made a 3-point shot, and Warnock drew a foul on a 3-pointer, sinking all three free throws to bring Iowa within nine points of UConn’s lead, 63-54.

Near the end of the third quarter, the Huskies went on a 7-0 scoring run, extending their lead back to 15 points.

Clark hit a 3-point shot at the buzzer to cap the Hawkeyes’ third-quarter performance. Even after Clark’s shot dropped, Iowa still trailed 72-61.

Iowa got within nine points of UConn’s lead with about seven minutes remaining in the game as sophomore guard Gabbie Marshall hit a 3-pointer to make the score 77-68.

The Huskies, however, responded yet again as freshman point guard Paige Bueckers dropped a 3-pointer of her own to push the Huskies’ lead back to double digits.

With five minutes left in the fourth quarter, Clark was hit in the face and she subsequently turned the ball over. UConn followed the turnover with a bucket, claiming an 82-70 lead with 4:54 remaining.

Sophomore guard Megan Meyer briefly relieved Clark, then returned to the bench when the Big Ten Freshman of the Year was ready to come back into the game.

Iowa struggles on the glass

UConn put its size advantage to good use on Saturday, as it heavily outrebounded Iowa, 42-25.

Husky post player Olivia Nelson-Ododa — who stands at 6-foot-5 —led all rebounders with 11.

Iowa head coach Lisa Bluder used her bench sparingly on Saturday afternoon, as freshman center Sharon Goodman and junior guards Megan Meyer and Tomi Taiwo were the only non-starters to see the court.

Taiwo recorded 16 minutes of game action, while Goodman played four minutes. Meyer checked into the game for less than a minute.