Iowa Republicans said the results of Iowa’s 2nd Congressional District race should stand and that Rita Hart should have exhausted her options to contest at the state level before taking the contest to the Democratic controlled U.S. House. 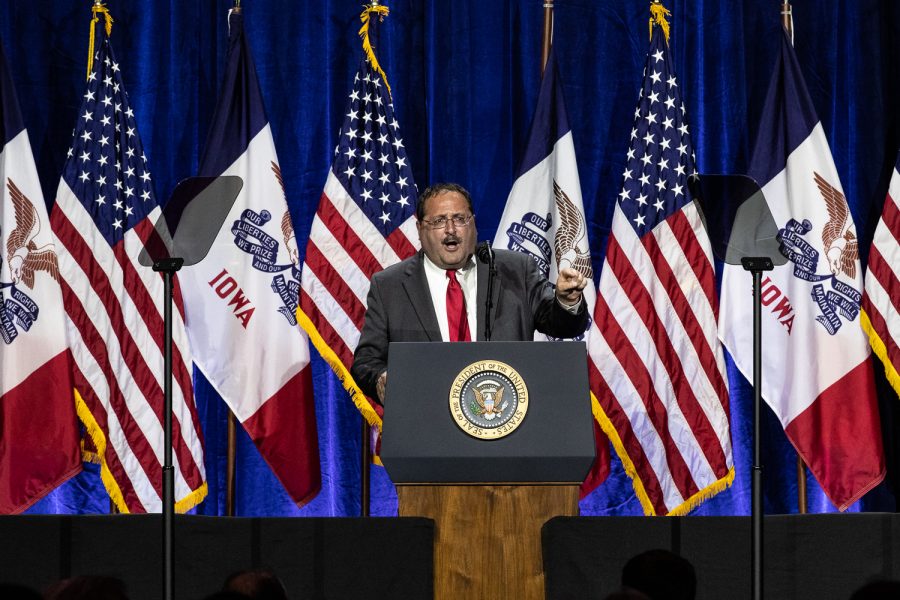 The Iowa Republican Party chairman Jeff Kaufmann speaks to the audience during the Iowa GOP's America First Dinner at the Ron Pearson Center in West Des Moines on Tuesday, June 11, 2019. President Donald Trump was the special guest for the event.

Reynolds was joined by Iowa Republican Chairman Jeff Kaufmann and Secretary of State Paul Pate on Thursday to address Rita Hart’s contest of election results in the U.S. House of Representatives. The three Republican officials said the state-certified election results should stand, which shows Republican and now-U.S. Rep. Mariannette Miller-Meeks in a six point lead.

They said Hart should have exhausted her options to contest at the state level before taking the contest to the Democrat controlled chamber.

Hart’s lawyer Marc Elias said they chose to file in the U.S. House because the review period provided by the Iowa court system was too short to conduct a full recount of votes in the district. Hart’s contest alleges that 22 lawfully casted ballots were not counted, and if they were to be counted, it would show Hart in a nine point lead over Miller-Meeks.

Pate said his office and the Iowa Supreme Court were ready to carry out the contest on the state level, and that the Hart campaign should have exhausted all state avenues.

Hart’s course of action is permitted under the Federal Contested Election Act.

“We’re not talking about legality, we’re talking about more morality here, and the right thing to do is take the Iowa process to the fullest extent to which we can go by our code,” Kaufmann said. “It is a fair process, it is our judicial system.”

Reynolds claimed that if the U.S. House unseated Miller-Meeks, state election law across the country would be threatened.

Republicans in Congress have also spoken out against the contest. As previously reported by The Daily Iowan, U.S. Rep. Ashley Hinson, R-Iowa, led 123 other Republican lawmakers in sending a letter to House Speaker Nancy Pelosi, saying it was hypocritical for Pelosi to claim national voter fraud doesn’t exist while going forward with an investigation into the Iowa election. Hart’s contest doesn’t claim fraud, but that legally cast ballots were excluded. The letter also critiqued Hart for not going through the state’s judicial system before bringing her contest to the House.

Some House Democrats, such as U.S. Rep. Dean Phillips, D-Minnesota, have also raised concerns about a House vote on the election results.

“Losing a House election by six votes is painful for Democrats. But overturning it in the House would be even more painful for America,” Phillips wrote on Twitter. “Just because a majority can, does not mean a majority should.”

Reynolds thanked Phillips and the other Democrats who have spoken out against the contest, but turned a critical eye to the only Democrat in Iowa’s congressional delegation, U.S. Rep. Cindy Axne.

Ian Mariani, Axne communications director, provided The Daily Iowan with a press release from December where Axne said the tight race was an example of how every vote matters in elections.

“It is critical that every Iowan’s voice is heard in this election — and to that end, Rita Hart has Constitutional and legal grounds to pursue that goal at the federal level,” she said. “I support a transparent process that ensures every properly-cast vote in this contest is counted. It is the only way to give Iowa voters full faith and confidence in the outcome of this historically-close election.”

Republicans have branded this process the “Pelosi Steal,” with Kaufmann claiming an investigation done by a Democratic controlled committee will not be a thorough investigation.

Hart lost the election in Iowa’s 2nd Congressional District to now-Rep. Mariannette Miller-Meeks, R-Iowa, by six votes. However, her contest argues that 22 lawful ballots, with votes cast for both Hart and Miller-Meeks, were left out of the final tally.

“It’s important to not lose sight of the fact that the right to put a ballot in a ballot box is not a right to vote unless you have your vote count,” Elias told reporters on Tuesday. “And 22 voters who did everything right, right now remain without their right to vote, because their votes have been counted.”

Elias said despite backlash from Republicans and hesitancy from Democrats, he expects representatives will respect the voters if evidence shows Hart received more lawful votes than Miller-Meeks.