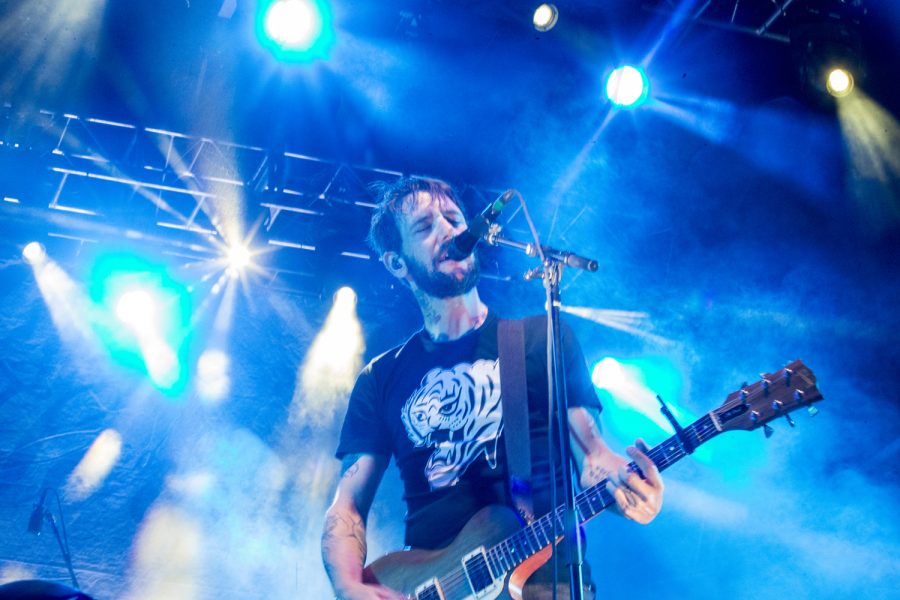 Ben Bridwell sings on Friday, August 3rd, 2018. He is the lead singer of Band of Horses, a popular rock band. This is Hinterlands fourth year in existence.

Hinterland Music Festival announced its lineup for its three-day outdoor festival last week, which will be held from Aug. 6 to Aug. 8. With several big-name headliners like the Avett Brothers, Leon Bridges, Black Pumas, and Tyler Childers and festival-goers eager to return to in-person live music events, the first round of tickets for the St. Charles music festival sold out within just 10 minutes.

The festival, which was canceled last year because of the pandemic, will be held at its standard location at the Avenue of the Saints Amphitheater. Festival Organizer Sam Summers described Hinterland as “a festival for people who don’t normally go to festivals.”

While Summers said the staff’s primary goal is to reproduce the same low stress, cheerful environment as its 2019 festival, several changes have been implemented to minimize the spread of COVID-19.

Hinterland will go forward with a 50 percent capacity limit and a mask requirement, and will also increase its number of food vendors, outdoor restrooms, and scanners, in an attempt to prevent lines, Summers said.

Summers said he is keeping a watchful eye on COVID-19 vaccination numbers and responses, in hopes to open up more ticket sales in the future. For now, he encouraged hopeful festival-goers to place themselves on Hinterland’s waitlist on their website.

RELATED: Sundance brings together film lovers and the FilmScene community

“Even if we opened up the rest of our capacity, we still wouldn’t be able to accommodate everybody this year — there’s just a lot of pent-up demand, not having a festival last year,” Summers said. “So, we do think that we will have more capacity — do we think we’ll get to full? I don’t know. You know, we have to just wait and see but we’re not in a rush to do that right now.”

After the cancellation of last year’s Hinterland, Summers offered each of the bands an opportunity to come and play the following summer. Most artists, like Leon Bridges, Tyler Childers, and Mt. Joy agreed to return, while a few additional bands were added to the venue.

One of the acts who agreed to return was Cedar Falls, Iowa band, “Hex Girls,” a five piece “rough and tumble rock band,” set to play on Friday of the festival.

Nick Fisher, bassist and singer of Hex Girls, said he felt honored to be a part of this year’s lineup among great performers like Orville Peck and Tanya Tucker.

“It’s just such an amazing opportunity that Sam and the staff reached out to us — it was just an awesome surprise, and so, so glad it’s going forward and this year,” Fisher said. “But I’m excited to be a part of, you know, playing with some of my favorite acts, the biggest festival in Iowa, and so I’m just looking forward to getting back up on stage and playing for people again.”

Highlights of the festival include The Avett Brothers, Mt. Joy, Leon Bridges, Tanya Tucker, Old Crow Medicine Show, and Caamp. A link to the full lineup can be found here.